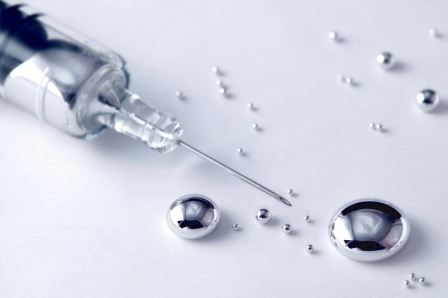 Why is one of mercury’s most dangerous applications—human vaccines—exempted from the ban? An update to our recent report.


A week of complex discussions in Geneva ended with governments from around the world agreeing to a global, legally binding treaty to limit mercury use. The Minamata Convention on Mercury, named after the Japanese city where thousands of residents fell ill with mercury poisoning in the 1950s, bans the production, export, and import by 2020 of a wide range of products and processes where mercury is used or released.

Products include implantable medical devices, switches and relays, certain fluorescent lamps, soaps and cosmetics, and some medical devices such as thermometers and blood pressure devices. Mercury-added dental amalgams are also to be phased out.

What’s exempted? Products used for military and civil protection; those with no mercury-free alternative; those used in religious or traditional practices; and vaccines in which the organomercury compound thimerosal, about which we have written about extensively, is used as a preservative.

Countries will be invited to ratify the treaty, which took four years to negotiate, at a meeting in Japan in October, but it is not expected to come into force for another three to five years.

A 2009 study published in the journal Toxicological & Environmental Chemistry found that thimerosal induces neural damage similar to that seen in autism patients—even in low levels. According to the study, “Thimerosal was found to be significantly more toxic than the other metal compounds examined.”

Thimerosal is touted as being an important preservative for multi-dose vaccines, which are needed in developing countries because they don’t require constant refrigeration or as much storage space. But as noted by Dr. Russell Blaylock, multiple vaccines given close together may overstimulate the growing brain’s immune system and destroy brain cells.

As Dr. Joseph Mercola points out, in 1983, before the autism epidemic began, children received ten vaccinations before attending school. Today they receive twenty-four vaccines before the age of 1, and thirty-six by the time they attend school. And that’s not including the recommended seasonal flu shot each year.

Although mercury is not used in most vaccines in the US now, it is still used in the flu vaccine. And if it has been phased out in the US apart from the flu shot, why should it be used on Third World kids?

In 2005, Robert F. Kennedy, Jr., wrote a searing exposé of the government cover-up of the news that mercury in childhood vaccines had been linked to autism in thousands of children, and tried to prevent parents from suing drug companies for their role in the epidemic. It comes as no surprise to learn that once again, vaccines in general are exempted from the mercury ban.
Apart from vaccines, it will also be interesting what effect the treaty has on the light bulb industry in the US: the treaty says that by 2020 the production, export, and import of certain types of compact florescent lamps (CFLs) (aka energy efficient lights) will be banned. However, until we have the full report, we won’t know the specifics. When Congress passed a ban on traditional light bulbs, we pointed out that the replacement fluorescent bulbs were more energy efficient but also contained mercury. Most people wouldn’t know that. If a bulb broke, they wouldn’t take care in disposing of it. And how would society as a whole safely dispose of masses of used, mercury-contaminated bulbs? Our more thoughtful friends in the environmental movement agreed with us, but Congress proceeded with the ban on old bulbs anyway. In the long run, this will stimulate the development of bulbs that are both energy efficient and mercury free, such as LED lights—but in the meantime, will the new treaty lead Congress to reconsider?

17 responses to “Global Treaty Will Nix Mercury—But NOT in Vaccines!”