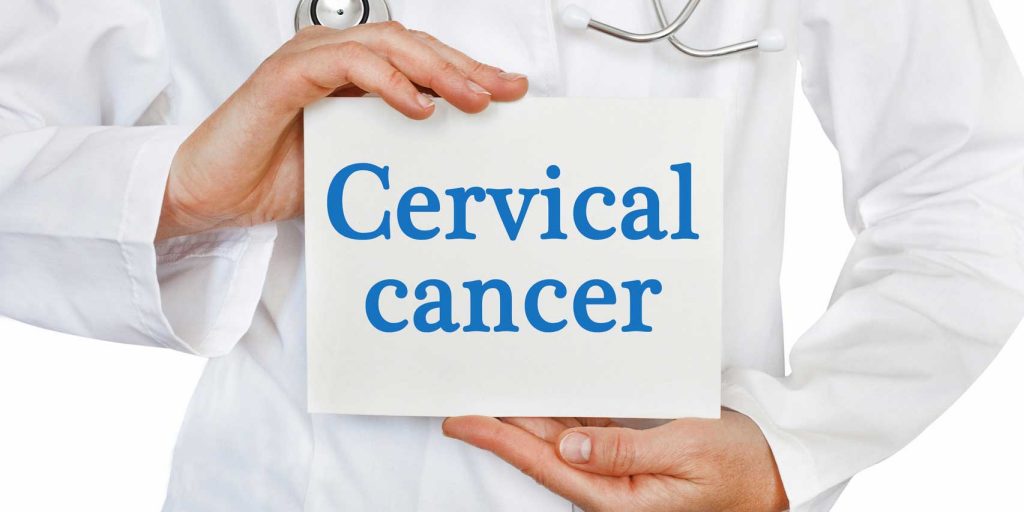 Believe it or not, all the protection you need from human papilloma virus (HPV)-caused cervical cancer is to “eat your vegetables,” as Grandma and Mother told us! Specifically, broccoli, cauliflower, cabbage, bok choy, Brussels sprouts, and other vegetables from the cruciferous (also called “brassica”) family.
Cervical cancer (cancer of the cervix of the uterus) is caused by certain strains of the HPV virus. One early clue that cruciferous vegetables may reduce the risk of cervical cancer came from studies of laryngeal and/or vocal cord polyps, which are also caused by HPV viruses, specifically HPV-6 and HPV-11, two of the four main HPV types that also cause cervical cancer. Although frequently benign, these polyps can proceed to actual cancer, which can be fatal.
HPV, Respiratory Tract Polyps, and the “2/16” Estrogen Ratio
In a 1998 report from Long Island Jewish Hospital,[1] researchers noted a close connection between estrogen metabolism and the growth of HPV viruses that cause polyps in the respiratory tract. (Technically, this condition is termed “recurrent respiratory polyposis” or RRP).
The researchers wrote,“Our results show an inverse relationship between the ratio of C-2 to C-16 alpha hydroxylated estrogens and the severity of RRP.”In English: the lower the “2/16” hydroxyestrogen ratio, the worse the RRP infection was; the higher the “2/16” ratio, the less severe the RRP infection was.
In this early study, the researchers asked RRP sufferers to eat significantly more cruciferous vegetables. They found that compounds naturally present in these vegetables stimulated increases in the 2/16hydroxyestrogen ratio, which correlated with improvement in RRP.
Other RRP research also reported that a natural substance found in cruciferous vegetables(indole-3-carbinol, or “I3C) can inhibit HPV growth. Researchers asked volunteers to take I3C to explore its effects on the RRP manifestation of HPV. Thirty-three volunteers were followed for an average of 4.8 years. Of the thirty-three volunteers, 33% had complete remission of RRP (yes, it disappeared!), 30% had a reduction in the growth of the RRP (total 63%), and 37% had no response.
(Since this research was published, I3C use as a supplement has been mostly replaced by DIM—di-indolylmethane—a closely related natural molecule with greater potency and fewer potential adverse effects at higher dosages.)
In 1999, actress and singer Julie Andrews filed a lawsuit[2] alleging damage to her vocal cords and loss of vocal quality during surgery for a polyp. If she’d eaten enough cruciferous vegetables to inhibit the growth of the HPV virus into a polyp, or perhaps had takenI3C or DIM to cause its regression, she might have kept her full singing voice!
HPV, Cervical Cancer, and the2/16Ratio
Perhaps even more importantly, cruciferous vegetables and/or DIM may prevent cervical cancer and even reverse it in early stages. In the late 1990s, Dr. Maria Bell gave a prepublication presentation at a meeting of the American College of Advancement in Medicine. This presentation was termed “a breakthrough” and “stunning” by some of the 250 physician-attendees—and for good reason.
In this presentation, Dr. Bell described her study on the reversal and apparent cure in some casesof the most common type of cervical cancer using I3C. Dr. Bell’s group noted that HPV infection is associated with a lower urinary 2/16 hydroxyestrogen ratio, and she showed a slide (yes, it was an actual “slide” at that time, not a ”Powerpoint”
presentation) demonstrating an inverse relationship between the degree of precancerous changes of the cervix and the urinary 2/16 OHE1 ratio.(In English again: lower 2/16 ratio, higher degree of precancerous changes.)
She referred to other research showing that mice with HPV-induced laryngeal papillomas had lower urinary 2/16 OHE1 ratios. When mice not infected with HPV were pretreated with I3C and then deliberately exposed to HPV, only 25% got papillomas. By comparison, 100% of mice not pretreated with I3C and then exposed to HPV suffered resultant papillomas. In other research, mice were given estradiol and then exposed to HPV. Those pretreated with I3C developed cervical and/or vaginal cancer in only 2 of 24 cases (8%). Those without I3C pretreatment developed cervical and/or vaginal cancer in 19 of 25 cases (76%).[3]
Dr. Bell’s own study[4] was conducted on women with cervical intra-epithelial neoplasia (CIN), an abnormal growth of cells on the surface of the cervix caused by HPV infection. CIN is not fully-developed cancer and is usually curable by local surgery after detection by a Pap smear. Although CIN can remain stable or even regress on its own with no treatment, a small percentage of CIN progresses to become outright cervical cancer, usually cervical squamous cell carcinoma (SCC), if not treated.
Thirty women with stage 2 or stage 3 CIN were enrolled in the study. (Stage 1 is barely beginning; stages 2 and 3 are further local progression of the cancer with perhaps local lymph node involvement; stage 4 is when the cancer spreads to another organ.) Diagnosis as well as follow-up involved Pap smears, a more comprehensive visual examination technique called colposcopy, and biopsies.
Ten women took placebos, ten took 200 milligrams daily of I3C, and ten took 400 milligrams daily of I3C. The urinary 2/16 ratio was checked at the beginning of the study and at four weeks. (This ratio changes after only a few days of I3C ingestion.) After twelve weeks, the women were checked with colposcopy again, and a biopsy.
Four out of eight (two dropped out of the research) in the 200 milligrams daily I3C group experienced complete regression (yes, the stage 2 or 3 cancer was gone!), four out of nine (one dropped out) in the 400mggroup experienced complete regression (again, the stage 2 or 3 cancer was gone!), while none of the women in the placebo group experienced complete regression of their CIN.
Dr. Bell pointed out that although the study showed a correlation between cancer regression and the urinary 2/16 hydroxyestrogen ratio (higher 2/16, more cancer regression), it wasn’t an exact fit, indicating that perhaps the I3C is working by other means in addition to altering the urinary 2/16 ratio. Despite this, taking I3C appears to have caused regression in a very significant proportion of cervical cancers. Although the study lasted only twelve weeks, it’s a reasonable to make a few predictions based on the studies:

For Even Better Results . . .
As good as these results were, they could theoretically have been even better if the more active form of I3C—DIM—had been used instead. While I3C is a molecule found in plants, especially cruciferous vegetables, in the human stomach it is “condensed” by the action of normal stomach acid into “dimers” (two of the same molecules stuck together) and “trimers” (three of the same molecules stuck together). The major “dimer” of I3C is “di-indolylmethane” (DIM), which is the active form of I3C in human bodies.
Many students of staying healthy as we age are well aware that not everyone has normal stomach acid production. As we grow older, and we all do, more and more of us have age-related declines in stomach acid. If the active form—DIM—had been used, it’s very likely that the results would have been better. (DIM is presently available in natural food stores, compounding pharmacies, and the Tahoma Clinic Dispensary, www.tahomadispensary.com. Cruciferous vegetables, hopefully organic, are found in every grocery store!)
Whenever testing finds a low or even low-to-normal 2/16 urinary estrogen test, I always recommend eating cruciferous vegetables four times per week, with retesting in just one month. (As noted above, this ratio can be changed rapidly.) If the 2/16 normalizes, all that needs to be done is continue eating lots of cruciferous vegetables. If it has not normalized, the addition of sufficient DIM will always normalize it.
As eating cruciferous vegetables every day has in the past been associated with causing hypothyroidism, always check with a physician skilled and knowledgeable in natural medicine before exceeding four times weekly.
There’s No Need for HPV Vaccination!
Dr. Bell and her associates made a valuable, breakthrough contribution to cervical cancer treatment. In addition to the particulars of the type of cancer and its treatment, they’ve shown that an understanding of the biochemistry of this particular cancer can lead to an effective and entirely nontoxic naturaltreatment. Even though it’s not effective in all cases, there will be significantly fewer women with this particular cancer subjected to mutilating surgery, radiation, and chemotherapy. Let’s hope—but let’s not hold our breath—that other researchers working on other cancers will increasingly turn to researching nontoxic natural treatments!
In the meantime, do as Grandma said: eat your vegetables! If you eat right, exercise, and take your vitamins, minerals, and botanicals, you’ll reduce your risk of ever needing breast, cervical, or prostate cancer treatment, nontoxic or otherwise.
And now that you know about the correlation between the urinary 2/16hydroxyestrogen ratio and cervical and prostate cancers, you can easily have your own urinary 2/16 estrogen ratio checked. Check with a practitioner skilled and knowledgeable in natural medicine, or contact Meridian Valley Laboratory (www.meridianvalleylab.com, 1-855-405-8378) for further information about how to have the test done directly. (Yes, I am Medical Director for Meridian Valley Laboratory.)
In addition, Pap smears actually cut the risk of developing cervical cancer by catching any problems in the early stages, often before it’s actually cancerous. As noted above, one of the developers of one of the HPV vaccines has even said,“The best way to prevent cervical cancer is with routine Pap screening starting at age 21 years.”
So for your daughters and granddaughters, tell them why they should eat their cabbage and other cruciferous vegetables. When they’re old enough, they should consider having the 2/16 hydroxyestrogen test done, and for sure have the routine Pap smear done. And forget that HPV vaccine (Gardasil) with its vaccine-casued deaths[8] and multiple“adverse events”![9],[10]