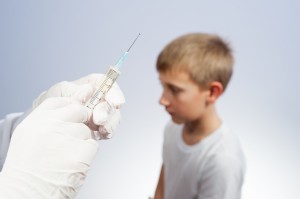 The recent Disneyland measles outbreak has brought the vaccine debate front and center. State-based Action Alerts!
We expect legislation to be introduced very soon in California and Arizona to revoke the personal exemptions from mandatory vaccination. We are keeping a careful eye on other states as well.
Sens. Diane Feinstein (D-CA) and Barbara Boxer (D-CA) are now urging reconsideration of vaccine exemptions. And it is noteworthy that in 2008, then-senator Barack Obama called the link between vaccines and a skyrocketing autism rate “inconclusive, but we have to research it” in greater depth. In 2015, President Obama is calling vaccine science “indisputable.”
Meanwhile the mainstream media, which is kept alive today with ads from Big Pharma, is wildly promoting the usual pro-vaccine myths. A big one is the theory of “herd immunity.” You’ve probably heard people ask, “Aren’t you risking ‘herd immunity’ and acting selfishly if you choose not to vaccinate your kids?”
Our colleagues at ANH-Europe explain that according the herd immunity theory, if a certain proportion of any population is inoculated against a disease through vaccination, it inhibits the spread of that disease within the population. People who cannot receive vaccines for whatever reason—say, on religious grounds, or because of a sensitivity to the vaccine’s ingredients—are thus protected from the disease by a high level of vaccination within society. The argument runs that parents who don’t vaccinate their children put the health of the whole society at risk.
While this may sound like a plausible theory, it developed out of observations of natural immunity, not vaccination effects. Statisticians observed that populations were protected when sufficient members contracted the wild form of a disease, and subsequently acquired lifelong immunity. With vaccines, however, the evidence plainly shows that unvaccinated children can catch infectious diseases from vaccinated children—which means that high rates of vaccination do not effectively protect those members of society who are unable to take vaccines, rendering the central tenet of herd immunity completely invalid!
In addition, the Weston A. Price Foundation takes great pains to point out that the choice not to vaccinate is being unfairly demonized:

Most media articles describe the MMR vaccine as safe, and criticisms of it are treated as a proven hoax. On the contrary, it appears that the hoax was a Center for Disease Control study exonerating the vaccine.
Also not mentioned is why the measles vaccine has to be packaged with two others rather than delivered alone. The real reason this is done is that the medical establishment doesn’t think parents will comply if vaccines are spaced out in time rather than delivered all at once at moments when the child is in medical custody, such as a maternity ward. That is the only reason for so many jabs on one day at such early ages.
It’s time for both sides to stop relying on emotional arguments and instead let the science—all of the science, even the less popular research—speak for itself.
Action Alert for Arizona and California residents! Write to your state legislators and oppose the introduction of any bills that would eliminate personal exemptions from vaccines. Please send your message immediately!