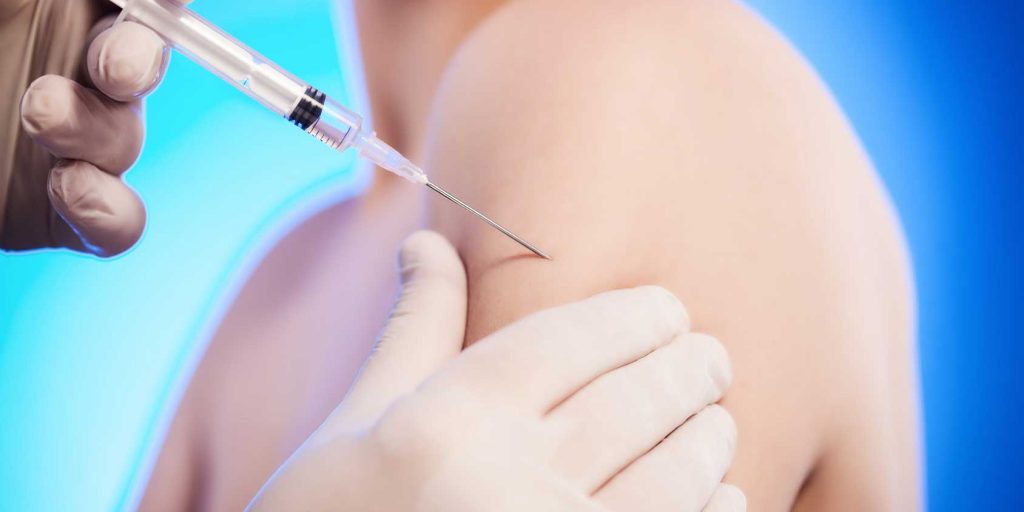 That’s the vaccine makers’ main argument. But it is false.
Libertarian presidential candidate Gary Johnson recently reversed his opposition on mandatory childhood vaccination. When asked what caused him to make a U-turn and adopt what would seem to be an anti-libertarian position, he said,
I’ve come to find out that without mandatory vaccines, the vaccines that would in fact be issued would not be effective.…It’s dependent [on having] mandatory vaccines so that every child is immune. Otherwise, not all children will be immune even though they receive a vaccine.
This line of argument is one of the main pillars behind forcing parents not only to vaccinate their kids but to do so on the government’s schedule, which includes more and more vaccines given on the same day, plus a vaccination at birth aimed to prevent a sexually transmitted illness. But is the herd immunity argument true? No.
The herd immunity hypothesis states that a very high percentage of a community must be vaccinated in order to protect everyone (the herd) from a disease. This is supposed to work because there are not enough vulnerable individuals to allow the disease to spread. Those few who are unable to receive vaccines on medical grounds are then supposed to be protected by the inability of the infectious agent to spread.
This line of argument further states that a decision not to vaccinate is selfish because it threatens the health of those too vulnerable to be vaccinated against a disease. Johnson doubles down on this by suggesting that even immunized kids will not be protected if too many of the germs are circulating. This sounds completely illogical, but it has been proven that many vaccines do not work reliably. They are not in fact protecting kids who have been vaccinated.
The herd immunity idea simply isn’t supported by the facts. The argument was developed out of observations of natural immunity, not vaccination. Statisticians observed that populations were protected when sufficient members contracted the wild form of a disease, and subsequently acquired lifelong immunity.
With vaccines, however, the evidence plainly shows that unvaccinated children may catch infectious diseases from vaccinated children. The result is that vaccination, not failure to vaccinate, is spreading the disease. Moreover the children who do fall ill naturally then have strong immunity, while vaccinated children do not.
Russell Blaylock, MD, makes an additional point:

When I was in medical school, we were taught that all of the childhood vaccines lasted a lifetime. This thinking existed for over 70 years. It was not until relatively recently that it was discovered that most of these vaccines lost their effectiveness 2 to 10 years after being given. What this means is that at least half the population—that is, the baby boomers—have had no vaccine-induced immunity against any of these diseases for which they had been vaccinated very early in life. In essence, at least 50% or more of the population was unprotected for decades.

Of course, the medical establishment has a rejoinder to Dr. Blaylock’s point: just mandate repeated child and adult revaccination. Don’t be surprised if we start to hear the government talking about that, because it would produce enormous profits for Big Pharma.
The vaccine herd immunity theory is further undermined by the fact that not only infection but even epidemics can occur in vaccinated populations. In 1989, the CDC reported measles outbreaks occurring in schools with vaccination levels above 98%. The same has been true for whooping cough, a vaccine which has been “improved” but still may not work.
The herd immunity argument is also inconsistent. On the one hand, the theory goes, people who cannot receive vaccines for whatever reason are protected from the disease through a high level of vaccination within the rest of society. On the other hand, parents who don’t vaccinate their children put the health of the wider community at risk. How can a handful of people not getting vaccinated be protected from getting sick, while at the same time being so disease-ridden that they make others sick? This is not logical. Yet supposed health authorities on the subject, mindless media commentators, schools doing the government’s bidding, and parent-teacher associations waste no opportunity to bash parents over the head with this message.
We know that drug companies are today failing to produce profitable new drugs and are looking to vaccines to restore their profits. Big Pharma’s future without government mandates is beginning to look doubtful, as the wisdom of taking so many legal but risky drugs on top of vaccines is being questioned. We know that many of the ingredients in vaccines (mercury, aluminum, formaldehyde, etc.) are not safe. We do not yet have any studies showing that taking so many legal, FDA-approved drugs together is safe.
Drug companies provide huge political funding, are a major power on Capitol Hill and in state legislatures, and provide a lifeline of advertising dollars that in many instances is keeping old media alive. Given the potential for corruption here, we need to be sure that arguments over vaccines are indeed science-based, not just crony capitalism operating under a mask of pseudo-science.
What we need here is honest science. We know that the safety record of vaccines differs tremendously. Some seem relatively safe. Some, such as the Gardasil vaccine for genital warts, have a record of horrific “adverse events” including death. Vaccine ingredients also differ tremendously: some include the very toxic substances such as aluminum and mercury we mentioned above; others don’t. The ever-expanding vaccine schedule at younger and younger ages—and insisting that the child receive so many vaccines the same day—violates common sense and has never received adequate study.
Vaccines are supposed to protect children, not harm them so that giant companies can make huge profits. The herd immunity theory does not hold up. But even if it did, much more research is needed to be sure that we are not recklessly harming the next generation.

Other articles in this week’s Pulse of Natural Health:
Corrupt Pediatricians Disgrace Themselves
FDA Set to Yank Brain Health Herb