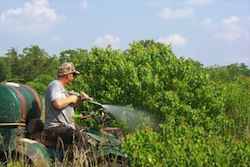 The poison can drift up to 100 miles, and may be in your water! Action Alert!

Remember our article from February about the strain of corn that has been genetically engineered to withstand the herbicide 2,4-D, one of the active ingredients in Agent Orange? Here’s the sequel: Dow AgroSciences has petitioned USDA for the deregulation of a new genetically engineered soybean seed that is resistant to the same infamous herbicide. Agent Orange, you may recall, was used in Vietnam as chemical warfare, and devastated a generation of both the Vietnamese and the American soldiers who used it.
The USDA has already released a plant pest assessment stating that “the DAS-68416-4 soybean is highly unlikely to pose a plant pest risk.” The agency’s draft environmental assessment stated that their “preferred alternative” was to deregulate. Even so, we need to file our protests now. This will also lay the groundwork for possible later court action.
Deregulation of this toxic new soybean seed would be a financial boon for Dow. About half of all US farmland is planted in corn and soy, and about 90 percent of soy and 70 percent of corn are from Monsanto’s “Roundup Ready” seeds—that is, they’ve been engineered to withstand Roundup, Monsanto’s herbicide. The problem, as we’ve noted before, is that “superweeds” are becoming resistant to Roundup. So Dow has genetically engineered a soybean that can withstand an even more toxic herbicide, 2,4-D, the Agent Orange ingredient. This gives Dow a chance to make a tidy profit and try to grab some of the market from Monsanto.
This poison has been shown to get into drinking water, and has a tendency to drift up to 100 miles on the breeze. It has been shown to cause non-Hodgkins lymphoma and to act as an endocrine disruptor. It is carcinogenic, a neurotoxin, causes liver and kidney damage, and produces birth defects. Nor is there any research on how 2,4-D and glyphosate affect human and wildlife health in combination.
Action Alert! USDA’s comment period for this new genetically engineered soy is now open. Please write the agency today and ask them not to deregulate this soybean and open the way for widespread use of this Agent Orange herbicide! Please take action today!

18 responses to “Agent Orange Soy: Just Another Day at USDA”