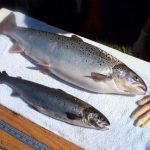 You may have heard that the USDA awarded a hefty research grant to AquaBounty, the “Frankenfish” creator. But there is more to the story….


What you may not have heard is that the award came just as the company was facing major financial troubles. This was a bailout. And there are more GMO threats in our future coming to the produce area of our supermarket aisles.

In September, the US Department of Agriculture awarded $494,000 to AquaBounty to study technologies that would make their genetically engineered Atlantic salmon sterile, so it couldn’t mate with non-GMO salmon. AquaBounty’s current sterilization technology hasn’t proved 100% effective. On its face, the USDA grant was intended to remove one of environmentalists’ biggest objections to the GE salmon, marketed under the name AquAdvantage, although inter-species breeding is not the only known problem. The GE fish may also be significantly more allergenic than natural salmon among other issues.


It’s bad enough that government is in bed with industry and cannot possibly be objective in the review and approval process. But it is also noteworthy that the infusion of nearly half a million taxpayer dollars came just as AquaBounty was facing grave financial troubles. The company’s interim report shows a loss of $2.8 million in the first half of 2011 alone, and stated it was “considering options for raising further working capital.” Just a few months later, the USDA obliged by giving the company a nice, fat grant.

USDA’s sister agency, FDA, is still in its review process for the GE salmon. In its appropriations bill, the House voted to stop funding of the fish, but the Senate has not included the same language in its own appropriations bill. It seems a foregone conclusion that FDA will approve the salmon if USDA is funding it.

Representatives Don Young (AK) and Peter DeFazio (OR) sent a letter to the USDA asking them to rescind the grant. “The USDA should not be in the business of picking winners and losers,” said Young. “Propping up a company who has already researched and developed their technologies should not be the business of the federal government. This company is not losing money due to a lack of research; they are losing money because Americans prefer wild salmon over Frankenfish.”

Consumers also face a threat of unidentified genetically engineered foods in their produce aisle. Monsanto plans to dominate the $3 billion global produce market by making their GE seeds the primary source of the nation’s vegetables and fruits. According to Monsanto’s chief executive, “This isn’t a hobby….We’re serious about it.” As the Los Angeles Times put it,

Grocery customers in California and elsewhere are chopping its onions that produce fewer tears, stir-frying its broccoli that decreases cholesterol, and biting into tiny orange tomatoes that last longer on the shelf. Soon, people will be thumping melons bred to be a single serving and shucking sweet corn genetically modified to enable farmers to spray the fields with the company’s weed killer, Roundup. To do this, it’s marrying conventional breeding methods with its vast technological resources to bring about changes in fruits and vegetables in months or years, rather than in decades.


Currently, vegetable seeds represent only 8% of Monsanto’s revenue. However, the company has already acquired four vegetable seed companies, 57 research centers, and hired many researchers and scientists.

Citizens nationwide are demanding that genetically engineered foods and foods containing genetically modified organisms be clearly labeled as such. Send your message to the USDA, FDA, and Congress, and tell them how concerned you are about Monsanto’s push into our nation’s produce. Take action today!

33 responses to “Another Fishy Bailout and GMO Produce in Our Future—New Action Alert!”