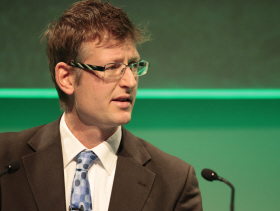 For one thing, he isn’t a scientist at all.


This episode has been all over the media. Some commentators have speculated that this will turn the tide in Europe and persuade regulators there to give a full green light to GMO. But let’s take a moment to review the facts.

Mark Lynas is not a scientist. He does not even reveal his education on his own website, nor is it easily available on the Web. He is a British author, journalist, and environmental activist with a flair for publicity and a primary focus on climate change. He’s been called a “pioneer” and an “apostle” of the anti-GMO movement, but that is mostly his own self-promotion.

At a farming conference in Oxford, England, earlier this month, he gave a speech reversing his previous position on GMO in characteristically dramatic style: “You are more likely to get hit by an asteroid than to get hurt by GM food.” Obviously no scientist would make such a statement given the lack of established facts about GMO. It is precisely the lack of proven facts which are the problem. Lynas added, just to stir the pot further: “More to the point, people have died from choosing organic, but no one has died from eating GM.” Of course he provided no support for that wild claim.

Lynas says he was blinded by the anti-GMO rhetoric, that “ the debate is over” and there is a “scientific consensus” in favor of it, which is patently false. He told NPR that he originally came out against GMO without studying it, which we believe. While this may be indicative of his immaturity at the time—this is, after all, the same fellow who threw a cream pie in the face of climate-change-denier Bjorn Lundborg—it may also indicate his ability to be persuaded by whoever is yelling the loudest at the time.

In his speech at Oxford, Lynas made a number of more specific claims about the safety and effectiveness of genetically engineered crops. Let’s look at them and see how they stand up to all the scientific evidence:


The real story here is not Lynas’s antics, from pie-throwing to dramatic recantations. It is the media’s coverage of the latest self-promotional stunt. Cover the stunt if you like, but please do not pretend that this has anything remotely to do with science.
Editor’s Note, 1/25/13: In an earlier version of this article, we included an abbreviated quote by Mark Lynas on the safety of GM.

35 responses to “Have You Heard about the Famous Anti-GMO Scientist Who Switched Sides and Is Now Pro?”