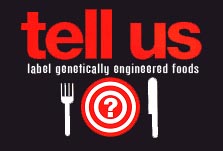 An exciting new ballot initiative, if California voters approve, could turn the tide against genetically engineered foods in America.


In 1994, a Monsanto employee was quoted as saying, “If you put a label on genetically engineered food you might as well put a skull and crossbones on it.” If that’s true, then a new ballot initiative in California—launched just last week—could mean the death knell for GMOs in America. Food manufacturers will not be able to afford different packaging and labeling for California customers only, so they’ll have to label all their food.

The Organic Consumers Association is asking California to require the labeling of GE foods as well as foods containing GE ingredients. To get the measure on the November 2012 ballot, they need to collect 504,760 signatures by March of next year.

As you know, ANH-USA strongly supports GE labeling and informed consumer choice, and this is a big step in the right direction. The public agrees: in a 2008 nationwide poll by Consumers Union, 95 percent of respondents said they thought food from genetically engineered animals should be labeled. And with consumers overwhelmingly against genetically engineered foods, a labeling requirement could remove these foods from the shelves.

We wish to thank Mike Adams for breaking this exciting news. We will keep readers informed as the initiative progresses.
If you live in California and want to help support this ballot initiative, please visit the Organic Consumers Fund campaign page to see how you can get involved.