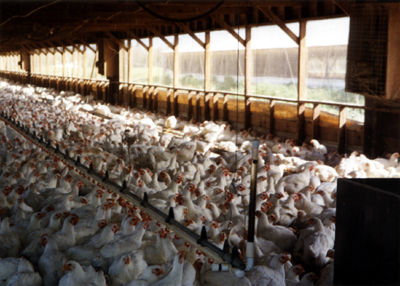 Iowa and Florida are considering bills that make it illegal to film or photograph inside factory farms without permission. Are the CAFOs afraid their unhealthy conditions and animal cruelty will be exposed?  Help us put a stop to this madness!

Two weeks ago we reported on the way the FDA is blocking journalistic freedom of speech through the information embargoes they impose. Freedom of speech is taking another hit, this time from state legislatures.

Concentrated Animal Feeding Operations (CAFOs) are animal feeding facilities that confine animals for more than 45 days in an area that does not produce vegetation during the growing season. In a CAFO, animals are crammed by the thousands or tens of thousands, often unable to breathe fresh air, see the light of day, walk outside, peck at a plants or insects, scratch the earth, or eat a blade of grass. They are notorious breeding grounds for disease and thus overuse antibiotics, and they pollute the environment in terrible ways.

Moreover, farmers have carte blanche to treat animals cruelly as long as the animal is intended for the sale of food and the actions are considered common practice. They are protected by “common farming exemptions” (CFEs) that vary from state to state but all serve the same purpose. As author Erik Marcus points out, CFEs render the horrors of battery cages, veal crates, and gestation crates completely legal. Likewise, they allow cruel practices such as castration without anesthetic, beak searing, and the deliberate withholding of lifesaving veterinary care. “Right now, at least 30 states have CFEs on the books, and that number is growing. Factory farming is a horror show, and the industry knows it—so they have gotten CFEs passed in order to evade prosecution.” New York Times food writer Mark Bittman recently discussed the inequity of laws that protect companion animals, but allow unconscionable abuse of farm animals.

There are two new bills that would limit journalistic freedom of expression. The first, a clumsy and probably unconstitutional Florida bill that would ban photos, focuses on undercover attempts to film inside industrial livestock facilities. As ABC News reports, SB 1246 would make it a first-degree felony to photograph a farm without first obtaining written permission from the owner. Farmers say the bill is needed “to protect the property rights of farmers and the ‘intellectual property’ involving farm operations.”

The bill was apparently inspired by undercover videos like those here and here (warning: very disturbing images) produced by the Humane Society and People for the Ethical Treatment of Animals. But, as writer and media/technology consultant Tom Laskawy puts it, “Mostly it was inspired by rank stupidity. It doesn’t take a close reading of the Constitution to know you can’t make photographing private property from a distance illegal.”

The second set of bills, from Iowa (HF 589, and its companion in the Iowa Senate, SF 431), criminalize “animal facility interference” for shooting a photo or video without facility owners’ consent or knowledge, and “animal facility fraud” for people who obtain employment in order to shoot videos or take photos. Penalties include fines and prison sentences.

Unfortunately, the Iowa House of Representatives has already passed its bill, and the Senate’s bill is in committee. Unlike the Florida bill, there may be fewer constitutional issues with a law that limits workers’ behavior on the job or statements made on job applications. As Laskawy notes,

A law like this could have a chilling effect on undercover work of all kinds. If this law passes and survives judicial scrutiny, you could imagine many different industries scrambling to have similar laws passed to protect them from muckraking reporters or activists….

People have the right—and the responsibility—to know where their food comes from. Real food safety and a healthy lifestyle include organic, local farming, not to mention the humane treatment of animals—including the ones we eat.

Even 11-year-old kids like Birke Baehr are telling the world about the dark side of the industrial food system, as this video demonstrates. Young people are clearly smarter than some legislators.

If you are a resident of Florida or Iowa, please contact your legislators and voice your opposition of these bills!