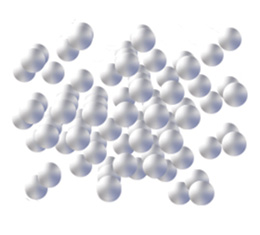 The EPA, on the other hand, allows its widespread use as a germ killer in clothing, bedding, cosmetics, electric shavers, baby bottles, and food containers.


Silver has been used as an antimicrobial for thousands of years—that’s why forks, spoons, and platters were traditionally made out of silver. Nanosilver, however, sprang out of the new science of nanomaterials, which involves creating objects smaller than 100 nanometers. (A nanometer is a billionth of a meter.) For example, the period at the end of this sentence is a million nanometers wide.

Objects this small can penetrate parts of the body that larger sizes of silver cannot and thus potentially increase silver’s antimicrobial effect. The new size however also poses potential risks of misuse. The Natural Resources Defense Council (NRDC) filed a lawsuit in January 2012 to block the EPA from allowing nanosilver on the market without the legally required data about possible harmful effects. Australian microbiologist Gregory Crocetti adds that important clinical uses of silver “will be diminished by completely hysterical and frivolous uses” such as nanosilver being used in bedding and clothing simply to prevent odors and keep linens fresher longer between washings. He implicitly acknowledges, as the FDA will not, that nanosilver has important therapeutic applications.

Silver kills all kinds of bacteria, attacking them in three distinct ways:


This triple-pronged attack makes it unlikely that bacteria could develop resistance to silver—although it cannot be completely ruled out. (Bacteria would have to mutate in all three ways.) For this reason, critics of using silver in clothes and similar products are right.

Because silver weakens the wall of the bacteria, it also allows conventional antibiotics to enter more easily. Research on mice at Boston University showed that with silver added, lower doses of antibiotic drugs were needed to kill bacteria. Silver was also able to reverse the antibiotic resistance of E. coli bacteria, making them once more susceptible to tetracycline. The mice were left unharmed by the silver.

This is huge, if only because it may force medical authorities to recognize silver as a therapeutic agent. It could also be the answer to the growing problem of antibiotic resistant diseases that are becoming endemic.

The FDA does not recognize colloidal silver (silver suspended in a liquid) as a safe and effective antibiotic and believes there is no evidence to support its use. This has been the agency’s position since 1996. This led the authors of this study to want to evaluate the mineral’s antimicrobial efficacy (and therefore the FDA’s claim). They found that, contrary to the agency’s claim, ionic colloidal silver is highly effective in killing bacteria.

Another study similarly concluded: “Silver particles could offer a great potential for application as [an] antibacterial agent with low human toxicity.”

An epidemic of tuberculosis is currently ravaging Myanmar, with 9,000 new multi-drug-resistant TB infections every year. The normal strain of TB is easy to treat with a simple and cheap drug regimen, but when patients skip doses, the bacteria can fight back by mutating in ways that sidestep the drugs’ assault. Now, the drugs that are needed to fight this resistant strain of TB are highly toxic, one hundred times more expensive, and must be taken for longer periods of time. As we reported in 2012, the “miracle drugs” and vaccines of the mid-to-late 1900s are not standing the test of time.

Where is silver in the treatment plan for multi-drug-resistant TB in Myanmar? There are no known cases of silver-resistant bacteria, and as more “modern” antibiotics are rendered useless by bacteria that have learned to outsmart them, silver is an obvious answer.

Silver nanoparticles also show promise in fighting viral infections. The Journal of Virological Methods reported in 2011 that silver nanoparticles inhibit the human immunodeficiency virus (HIV), the hepatitis B virus, and the H1N1 influenza A virus. That was confirmed in studies here and here. Condoms coated with silver nanoparticles have been shown to inactivate the infectiousness of both HIV and the herpes simplex virus. Water disinfection systems using silver nanoparticles were shown to exhibit antiviral properties, and silver applied to a water filter more than doubled its effectiveness in removing viruses from drinking water. Although this is providing important information, using silver in this way is untested and might also jeopardize silver’s continuing use as a potent antimicrobial agent.

How about using silver against fungal infections? There is mounting evidence for its antifungal effects, including four recent studies from universities and research institutes the world over (1) (2) (3) (4). This is heartening news.

Is colloidal silver safe for use by individuals and families? The evidence is that it is, but that care must be taken to follow the manufacturer’s directions in order to avoid an overdose. In general, it is better to avoid using silver for everyday infections such as teenage acne, but instead reserve it for more serious infections.

Meanwhile the FDA continues to keep its head buried in the sand. It ignores mounting evidence that silver is an important general antimicrobial, an important tool especially against resistant infections and pandemic, while ignoring the proliferation of nanosilver in consumer goods.

The agency appears to be trying to protect drug company products. The difference between drug company products and silver is of course that the latter is natural. As such, it is not easily patented, and not being patentable, no one can afford to spend $1 billion on FDA approval. This is a scandalous situation. How many millions of people will have to die as a result?