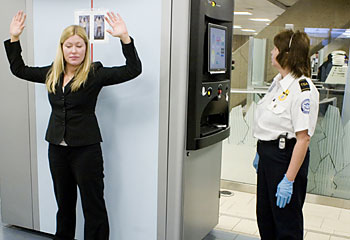 And even worse scanners may be coming.
As we reported earlier this year, the full-body x-ray scanners used in airports are so dangerous that the European Union has banned them. The backscatter machines being used by the Transportation Security Administration (TSA) emit “low” levels of ionizing radiation with an impact that is 10 to 20 times higher than the manufacturer’s calculations. They are a cancer risk.
There have been press reports about these dangerous machines being removed. But you have to read the fine print. The backscatter machines are being taken out of the busier airports not because of documented safety concerns, but because they are slowing down the line! Many people opt out of a scan from the backscatter machines because of privacy concerns (the scanners display a nude image of each person scanned to TSA officers in a nearby room), choosing instead to undergo the physical screening instead. And this is causing long waits at some airports.
The machines aren’t going away, however: they’re merely being moved to smaller, less-busy airports. So the health risks (not to mention the invasion of privacy) will be just as great as before—but perhaps harder to avoid.
Note that there are two types of airport scanning machines that use radiation (here are pictures so you can tell them apart at a glance). The dangerous backscatter machines use a “low”-intensity x-ray beam that is directed over the surface of the body. Millimeter wave scan machines use radiation waves that are not dissimilar to microwaves. Experts are generally much more concerned with x-ray radiation then with millimeter waves, although we don’t know enough about the latter.
The Electronic Privacy Information Center (EPIC) is suing the Department of Human Services over cancer clusters possibly linked to radiation exposure among TSA employees. EPIC is alleging that the agency failed to issue employees dosimeters—safety devices that could assess the level of radiation exposure—and mischaracterized the findings of the National Institute of Standards and Technology, stating that NIST “affirmed the safety” of full body scanners when in fact a Johns Hopkins University study revealed that radiation zones around body scanners could exceed the General Public Dose Limit.
The TSA’s administrator, John Pistole, was invited to testify at a hearing of the Subcommittee on Aviation on “How Best to Improve Our Nation’s Airport Passenger Security System through Commonsense Solutions.” Pistole refused to appear, saying that the Transportation and Infrastructure Committee has no jurisdiction” over the TSA, so no representative would be present at the meeting. Subcommittee on Aviation chair Rep. Tom Petri (R-WI) said the agency’s “absence today demonstrates why the public is so frustrated with the TSA.”
In response to both the health and the privacy issues posed by the backscatter machines, two new scanners are also making an appearance. One, being implemented at Boston’s Logan Airport, is equipped with Automatic Target Recognition software that will display a cartoonish image of the passenger—a rougher outline of a passenger’s body that’s similar to the A-shaped silhouette of Gumby, the green clay cartoon character.
A second body scanner has been developed by In-Q-tel, a quasi-governmental security company founded in 1999 “by a group of private citizens at the request of the Director of the CIA and the support of the US Congress.” It’s a laser-based molecular scanner that looks for trace elements of chemical compounds and radiation. The technology is portable, light, and quick, which means that it may appear in more places than just the airport—such as movie theaters, sports venues, etc.—anyplace large groups of people might congregate.
The laser scanner can be fired from 164 feet (50 meters) away, and is able to get a great deal of information from you—including traces of drugs or gun powder on your clothes. According to security expert and attorney Mychal Wilson, “They can also detect drugs, alcohol, and your breakfast, lunch, and dinner. Even your adrenaline level will be available for government analysis. Everything about your body will be available to the government and logged into a database.”
The health risks of the technology are still unknown. But Xichen Zhang, professor of lasers and optics at the University of Rochester, states that the system uses waveforms that can pass through clothes, luggage, etc., causing a minor reaction in whatever they hit. This is scary stuff indeed.