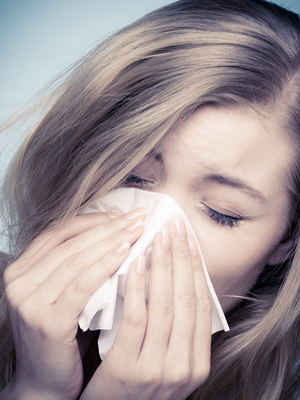 Here are the ANH-USA staff’s top solutions for getting serious relief—naturally!
For some people, allergy season begins as early as January, when cedars are pollinating. For most people, the prime season is spring (trees) or summer (grasses). Allergy symptoms commonly include itchy eyes, wheezing, headache, mucosal discharge, and cough, but if severe enough can mimic any cold or flu symptom.
It is not necessary to be crippled by pollen attacks. In our experience, the first natural solution offered below, even taken alone, will enable most people to put the problem behind them.
1. MSM: The Anti-Allergy Heavyweight. If you’re looking for the “big guns” of natural allergy remedies, the bazooka is surely MSM (methylsulfonylmethane). This inexpensive nutritional supplement has given members of our staff and board complete relief from seasonal allergies. And the evidence isn’t just anecdotal: according to a study in the Journal of Alternative and Complementary Medicine, subjects who took 2600 mg of MSM found their upper and total respiratory symptoms significantly reduced within seven days, and improvement continued for all thirty days of the study.
In addition, as Dr. Mercola notes, MSM is 34% sulfur, which your body requires. Sulfur helps the body detoxify itself, and also helps produce glutathione, an important antioxidant. MSM is extremely safe and can be taken at high doses, even if one’s diet is full of MSM-rich foods. Those of our staff who found a complete relief took more than 2600 mg: up to 10,000 mg a day in divided doses. At these doses, it is often more convenient to take MSM as a powder rather than a capsule, most of which contain 1,000 mg.
It also helps to get started taking MSM before allergy season starts and then increase it. It seems to take much less MSM to keep the horse in the barn than to bring it back in. Once you are suffering a full blown, debilitating attack, you will need some time to bring your body back to balance.
As a general rule, sulfur is thought to be acid-forming in the body. Since your internal acid/alkaline balance is important for health, it doesn’t hurt and might help to eat lots of vegetables or other alkaline forming foods when taking more sulfur.
2. Butterbur. This is a favorite adjunct to MSM, just the thing to help you over the momentary pollen crisis. It is an alpine herb which must be treated to remove a toxic ingredient, but once treated is nontoxic and can do wonders not only for allergies but also for headaches. Six double-blind placebo-controlled studies have validated butterbur’s benefits. A well-known brand name is Petadolex.
3. Rosmarinic acid, an herbal extract from rosemary available in supplement form from LEF.org, relieves allergy symptoms by dampening the immune response.
4. A freeze-dried nettle/quercetin combo that can be further enhanced with bromelain. Bromelain acts as an anti-inflammatory, while freeze-dried nettles and quercetin are natural antihistamines. Indeed, the earliest synthetic antihistamines were basically knock-offs of quercetin, but with many negative side effects, such as causing drowsiness, that were not associated with the natural product. As useful as freeze-dried nettles and quercetin are, with or without bromelain, they are not cures. They help but don’t solve the problem, as in our experience MSM usually does.
5. Phleum pretense, or Timothy Grass extract, has been shown to have major immunotherapeutic effects (that is, those who are exposed to the extract become desensitized to grass allergies). In fact, phleum pretense is so effective that it’s been developed into a patented drug (GRAZAX) by Big Pharma.
6. Tinospora cordifolia is an ayurvedic superstar. One study on T. cordifolia for the treatment of allergies, published in the Journal of Ethnopharmacology, showed relief from sneezing in 83% of patients, nasal discharge in 69% of patients, and nasal obstruction in 61%. This herb is found in the supplements Immune Modulator with Tinofend (another name for the herb) from Life Extension Foundation and HistaEze from Designs for Health.
7. Strengthen the immune system. At the head of our list is vitamin D3, which reduces the incidence of respiratory infections. Also get plenty of complete vitamin E (not just alpha tocopherol—you want the gamma and other forms as well) and magnesium, and knock off the sugar, which greatly weakens the immune system. The Townsend Letter, in its May issue, also recommended NAC (N-acetylcysteine) for immune system balance and allergy control and cited several studies. Finally, don’t forget vitamin C: studies indicate it’s a natural antihistamine, but one to be used cautiously, since too much can cause gastric upset.
8. Try a homeopathic remedy. The American Academy of Naturopathic Physicians recommends taking a homeopathic approach to some allergies: simply take an extremely diluted dose of the allergen. This small dose will act somewhat like a vaccination, “stimulating your immune system to an effective, rather than an extreme, response.” Much more study of homeopathy is needed to understand how it works, but it does work for many people.
The best part of trying these natural solutions to seasonal allergies? Avoiding the nasty side effects of allergy medicine! Big Pharma’s drugs cause drowsiness, dizziness, headache, loss of appetite, stomach upset, vision changes, irritability, and dry mouth and nose. But they cause more serious problems as well—such as increased appetite, anxiety, depression, and even loss of libido!

An earlier version of this article was published on LewRockwell.com on April 29, 2014.

6 thoughts on “Overwhelmed by Spring Allergies?”