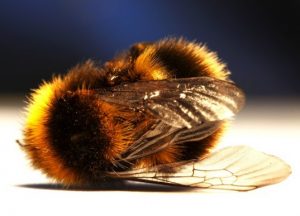 Isn’t it time the EPA listened to the science and not the insecticide manufacturer?


Since 2006, up to 40% of the bee colonies in the US have suffered Colony Collapse Disorder (CCD), in which honeybees die, disoriented, far from their hives. In 2010 we wrote about the disappearing honeybee and how this situation threatened much of our human food supply, including our vegetables and fruits, which must be pollinated by bees. Back then we noted that there have been very few reported bee losses among organic beekeepers, and suggested that the principal difference between them is the use of pesticides. We said at the time that this fact should lead anyone to the most logical conclusion: pesticides are likely responsible for CCD.

Now, a study by the European Food Safety Authority (EFSA) has labeled the pesticide clothianidin as being an “unacceptable” danger to bees. At least 143 million of the 442 million acres—that is, nearly one-third—of US cropland is planted with crops treated with one of three neuroactive insecticides related to nicotine (a newer class of pesticide called neonicotinoids), all of which are known to be highly toxic to bees: clothianidin, imidacloprid, and/or thiamethoxam.

Clothianidin, which is used to treat up to 90% of US corn, much of canola, and increasingly soy as well, expresses itself through the plants’ pollen and nectar—the honeybee’s favorite sources of food. In addition to finding clothianidin too dangerous to use on plants pollinated by bees, EFSA’s study specifically identifies the shoddy studies provided by pesticide manufacturer Bayer as evidence of clothianidin’s safety as “too flawed to be useful.” It was these studies that EPA used to first approve clothianidin in 2003, even against the objections of EPA’s own scientists.

Three years ago we reported about Bayer’s involvement in a material conflict of interest surrounding its pesticide studies. At the time, a study had decided that a fungus tag-teaming with a virus was killing the bees—but the study’s lead author, Montana bee researcher Dr. Jerry Bromenshenk, had originally signed up to be an expert witness on behalf of beekeepers who brought a class-action lawsuit against Bayer in 2003. He suddenly dropped out—and immediately received a significant research grant from Bayer to study bee pollination, which has continued in recent years. It should come as no surprise that Bayer pesticides were never mentioned in the study as a potential cause of CCD.

Now Bayer’s clothianidin has been linked to colony collapse in Minnesota and Ohio. And researchers at the Harvard School of Public Health, who studied imidacloprid (which has identical results), believe bees are being exposed either through nectar from plants or the high-fructose corn syrup that beekeepers use to feed bees. The problem is that farmers are not left with much of a choice, as most of the available seeds are already coated with the pesticide: either you buy the seed, or you don’t grow corn.

Meanwhile, the Environmental Protection Agency seems to be turning a blind eye to the situation. Even though they acknowledge that pesticides kill bees, they hurry to differentiate this from colony collapse disorder. And when listing possible causes of colony collapse, pesticides are conspicuously absent.

Are honeybees merely the canary in the coal mine? If pesticides that coat 90% of our corn are killing off bees, what is the impact of those same pesticides on humans?

It is extremely difficult to get accurate information when the biotechnology industry is aligned against you. For example, Beelogics, a company whose primary goal is to control colony collapse disorder, has just been bought by Monsanto. That means any research from Beelogics may now be compromised. Monsanto develops GMO corn and soybeans that develop their own pesticides. If these also contribute to colony collapse, we may never hear of it.

Even more frightening, government agencies always seem to side with industry. In Illinois, organic beekeeper Terry Ingram had accumulated fifteen years of research supporting his belief that Monsanto’s Roundup Ready crops cause CCD. But when he asked the Illinois Department of Agriculture to test one of his honeycombs for chemical contamination, since the bees wouldn’t touch it, the agency refused to test for chemicals but instead tested for foulbrood, a disease that affects bee larvae, and subsequently confiscated his bees, beehives, and equipment, and destroyed his fifteen years of research. Ingram calls it a subterfuge to destroy all incriminating evidence against Monsanto.

Colony collapse disorder is very dangerous because bees are an integral part of the ecosystem—roughly one-third of crop species in the US are pollinated exclusively by honeybees, including fresh vegetables and fruits. If bees die off, half of the world’s food supply will disappear. Forget about the billions of dollars in agricultural losses: if we lose the bees, we will have worldwide famine of unprecedented proportions.

On top of that, bees could hold the key to preventing HIV transmission. According to a study just published in the journal Antiviral Therapy, melittin, a toxin found in bee venom, physically destroys HIV virus without harming human cells. It’s a breakthrough that could potentially lead to drugs that are immune to HIV resistance. It could also be used for a topical anti-HIV gel, thus preventing transmission in the first place

The vital importance of the humble honeybee is just one more reason why we should abandon the industrial farming model in favor of organic farming. Dangerous pesticides and genetically engineered foods are not needed, and in the long run they are proving costly both to the economy and to human health.