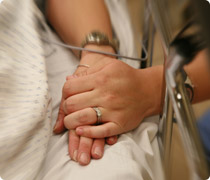 An upcoming congressional bill would give dying patients and physicians access to experimental drugs. Action Alert!


Imagine you’re terminally ill and have exhausted all the available treatment options. Your physician recommends a new, experimental treatment for your condition, but you’re ineligible to participate in ongoing clinical trials. You ask the drug company for treatment outside of their trials, but they say you have to go through the FDA first. Time’s running out, and you have to obtain permission to try to save your life—from the government! And you may never get permission.

This situation isn’t some Orwellian hypothetical situation: it’s a reality for thousands of dying patients. That’s why last year, former congressman Ron Paul introduced the Compassionate Freedom of Choice Act, which would have allowed terminally ill patients access to experimental drugs without FDA approval. Though the bill was left in the House, its supporters are not giving up. In fact, Representative Morgan Griffith of Virginia recently told us he will reintroduce the Act in Congress soon!

As we reported last May, the FDA does let terminally ill patients try experimental drugs and treatments under its “expanded access” rule. This allows the case-by-case use of an investigational new drug outside of a clinical trial if a patient has a serious or immediately life-threatening disease or condition and has no other treatment options left.

Unfortunately, the rule is woefully inadequate, marred by a prohibitively cumbersome application and documentation process. And remember, FDA can arbitrarily refuse access and even revoke permission once it’s granted! The application for expanded access requires a drug company to share information—which we all know drug companies don’t do very well. It also requires, among other things, a detailed description of how and where a drug will be produced; complex pharmacological and toxicological information; and, if enough patients ask for the drug, a whole new Investigational New Drug (IND) application by the drug company.

Furthermore, in what can only be described as a very bad joke, the FDA can deny expanded access if it deems the risks of an experimental drug too great for someone who is already terminally ill. Essentially, dying patients can be denied access to a drug because it could potentially make them sick. What the patient’s doctor thinks doesn’t matter.

Passing the Compassionate Freedom of Choice Act would erase all of these problems by removing the FDA middleman entirely from the equation, streamlining physician and patient access to experimental drugs. It would ensure that dying patients and their families—who don’t have the time or the strength to do so—won’t have to wage fruitless bureaucratic wars.

The heartbreaking story of Abigail Burroughs illustrates the need for the Act: shortly after turning twenty-one, Abigail ran out of conventional options in her battle against cancer. Abigail and her family turned their focus to obtaining one of two experimental cancer drugs that doctors felt had great promise of saving her life. Her efforts—thwarted by both the FDA and drug companies—were unsuccessful, and she died in 2001. Both drugs were eventually deemed safe by the FDA.

Detractors of this excellent bill may argue that FDA intervention is necessary to protect desperate patients from risky, untested drugs. However, full disclosure is a key component of the current draft of the Act, which states that in order to obtain an experimental drug, patients must first sign an informed consent document stating that they’re aware of the potential risks and benefits. Additionally, patients will need to work closely with their doctors (who will ultimately be the ones administering the experimental treatment), so it’s not as if they’re making important decisions without medical oversight.

They say only two things in life are certain: death and taxes. The government already mandates taxes; should they really mandate how terminally ill patients die, too?

Action Alert! Please write to your congressional representative and ask him or her to support and become a sponsor of this vital legislation. Also ask your senator to introduce similar legislation in the Senate. Please send your message today!

5 responses to “Should You Have to Fight FDA Red Tape to Save Your Life?”