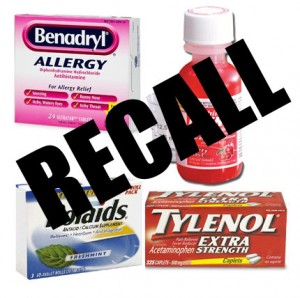 You’ll never guess the name of the company we are about to describe. This year alone it has issued nine product recalls, over 130 million of their products are off the shelves, thirty children have died from taking its medications, its CEO has been the subject of Congressional hearings and investigations, its quality problems are called “systemic” by federal investigators, and a number its foreign executives are being investigated or are in prison for bribery charges.
Is this some shady fly-by-night supplement company? No, it’s one of the best known and most respected companies in America with a 124-year history: Johnson & Johnson. Considering the amount of negative media attention paid to dietary supplements, we wonder why the mainstream media isn’t giving this story much coverage. Could it have something to do with the $2.5 billion J&J spends each year on advertising?
US health regulators are investigating 775 reported complications from the global drug company’s children’s medications, including 30 deaths—seven of which came after the most recent recall on April 29. While the FDA does not consider the adverse events a “spike” and absurdly claims it sees no “clear pattern” that the problems were caused by the recalled products, the Agency says there are “systemic quality problems” and “has had growing concerns about the quality of the company’s manufacturing process.” The recalls have involved problems ranging from contamination with bacteria and a nauseating smell from containers to liquid medicines that may contain tiny metal shavings and drugs that may not have the correct amount of active ingredient.
Just this month the FDA decided to recall two kinds of hip implants manufactured by Johnson & Johnson—a full two years after the Agency started receiving complaints from consumers.
J&J ordered a recall of about 100,000 boxes of contact lenses sold in Asia and Europe after customers in Japan complained about experiencing pain, stinging, or redness after inserting the lenses. And the company’s medical devices unit in Shanghai is being investigated for allegedly paying bribes to a top official in the Chinese State Food and Drug Administration.
The media have not, by and large, made much of these scandals—just a few short news articles, but certainly no cause célèbre. And even though the FDA is investigating, the government never really prosecutes the big drug companies. Why is this? One reason may be that the drug companies pay record sums to settle criminal and civil government allegations (last year Pfizer paid a whopping $2.3 billion in settlements), and federal and state medical programs get a chunk of that money. Perhaps more importantly, federal programs are legally barred from buying drugs or reimbursing drugs from companies convicted of a criminal offense. Since it is inconceivable to shut down access to the bigger drug companies, they become “too big to convict” and thus in effect above the law.
Here’s a perfect example: in 2009, the Justice Department could have charged Eli Lilly and Company with a felony for earning hundreds of millions of dollars by illegally promoting its schizophrenia drug Zyprexa for the unapproved treatment of dementia from 1999 to at least 2003. Prosecutors decided that it wouldn’t be fair to innocent Lilly employees, shareholders, and pensioners to potentially shut down the company, according to the sentencing memo, but the real reason was probably fear of not having access to Lilly drugs.

20 responses to “Supplements Are Contaminated, Drugs Pure. Right? No, Wrong”