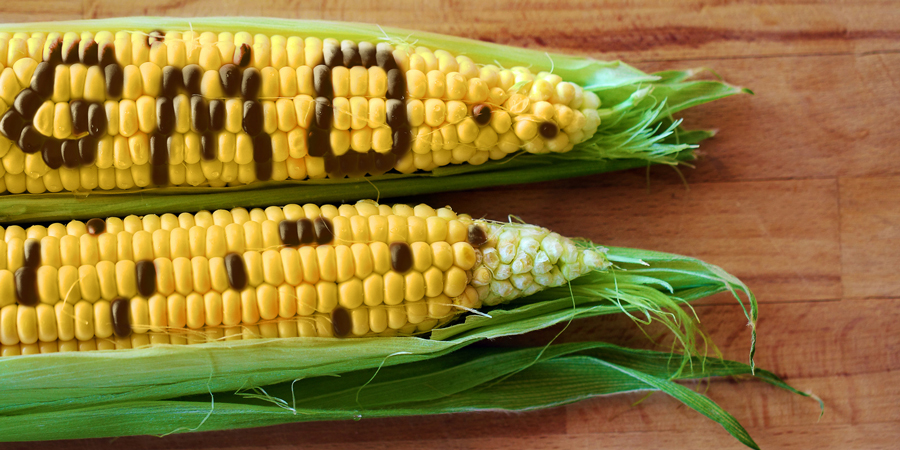 Rep. Mike Pompeo’s voluntary GMO labeling bill has been amended to include another brazen giveaway to Big Food and the biotech industries. Action Alert!
We’ve been closely monitoring the progress of the bill introduced by Rep. Pompeo (R-KS) and backed by industry. It’s titled, deceptively, the “Safe and Accurate Food Labeling Act of 2015”—and the news hasn’t been good. A few weeks ago, we reported that a Senate version of Pompeo’s bill was in the works while the House bill continued to gain co-sponsors and bipartisan support.
Worse, a new draft of the Pompeo bill doubles down in pandering to the Big Food and biotech industries. In this revision, states and localities would be prevented from banning GMO crops. That’s right—states would no longer have any oversight over genetically engineered crops!
In addition, this updated bill would preempt any state laws mandating the labeling of foods containing GM ingredients, which has prompted pro-labeling advocates to call Pompeo’s bill the “Deny Americans’ Right to Know Act”—the DARK Act. More than seventy bills have been introduced in over thirty states to require GMO labeling, and three states (ME, VT, and CT) have, with the help of ANH-USA’s legal team, passed mandatory GMO labeling laws. But all that would be nullified if this bill becomes law.
We suspect that this revision directly results from recent developments in Maui County, Hawaii, and Jackson County, Oregon. Both counties passed measures (a ballot initiative in Maui and an ordinance in Jackson) to ban the local cultivation of genetically engineered crops. Both measures are being challenged in court by Big Food. If Pompeo’s bill becomes law, decisions to uphold the bans would be moot: the language added to the most recent DARK Act draft would preempt local, democratic efforts to protect local farmers and ensure consumer health and safety.
In the past, we’ve exposed biotech’s pro-GMO talking points as deceptions, lies, and falsehoods on our GMO Fact Check page. GMOs will not feed the world or decrease pesticide use, nor are they proven to be safe for human consumption. But the fact is that, as far as policy discussions go, these arguments are utterly beside the point. Consumers have consistently and overwhelmingly demonstrated that they want to know what’s in the food they’re buying, and supporters of Pompeo’s DARK Act want to withhold this information from consumers.
The fact that Rep. Pompeo’s legislation not only seeks to preempt state labeling efforts but also to block local efforts to ban the cultivation of GE crops makes his real goals crystal clear—to protect the bottom line of agribusinesses, which have contributed over $100,000 to Rep. Pompeo.
Over the last few weeks, the bill has been continuing to gain momentum. Hearings on the measure have been held in the Energy and Commerce and the Agricultural committees, and a “mark-up” session is expected to happen soon, bringing the bill even closer to a vote.
Action Alert! Write to your legislators in Congress and urge them not to support the new discussion draft of the DARK Act, which would block states from taking action to protect residents’ health and safety. Please send your message immediately.