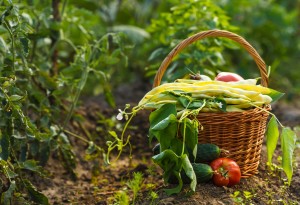 Last week saw an inter-agency power grab. It begins with the weakening of organic standards—and could end with the term “organic” becoming practically meaningless. Action Alert!
In September, the USDA announced changes to its interpretation of the “sunset” provision in the Organic Foods Production Act (OFPA), an incredibly important piece of legislation that Congress passed into law in 1990. These changes override the powers of the National Organic Standards Board (NOSB) and make it easier for food producers to use synthetics in organic food production.
The “Sunset” Controversy
Previously, any exemptions from organic standards were set to expire, or “sunset,” on a specific date—unless they were reinstated by a “decisive” two-thirds majority vote of the NOSB. Now it’s just the reverse: a synthetic material can be permitted to remain in an organic food indefinitely unless a two-thirds majority votes to remove it from the exempted list.
Thousands of consumer advocates and environmentalists spoke out against this power grab by the USDA—one that satisfies only the vested interests of large-scale producers trying to increase their profits with an “organic” stamp. ANH-USA was there at the meeting so we could speak out on behalf of consumers and voice our concern about the continuing dilution of organic standards.
The board received a tremendous number of comments about the new sunset process, including these:

Why the New Sunset Rule Is Dangerous
The shift in power was on clear display at last week’s NOSB meeting when board members voted to allow the continued use of gellan gum, tragacanth gum, sulfurous acid, sodium carbonate peroxyhydrate, and aqueous potassium silicate in organic production. Allowing these synthetic substances in organic production is a clear victory for producers who want to be considered organic without sacrificing their bottom line.
For example, large organic dairy producers such as Stonyfield Organic, Organic Valley, White Wave, and Horizon Organic say gellan gum—a thickening agent—is needed to stop the chocolate flavoring from separating from the milk while the carton sits in grocery stores. Consumer advocate and organic watchdog groups argued that the ingredient simply isn’t necessary and that such synthetic materials should never be allowed in foods that are certified as organic. Board members who advocated removing these items were voted down because of the new interpretation of the “sunset” rule.
At issue is the board’s composition, which has been infiltrated by corporate interests. The make-up of the fifteen-member board is clearly defined by statute, but an executive from Driscoll’s now sits in a seat that should belong to a farmer/grower. Another seat is held by an individual who, when appointed, worked for the country’s largest organic marketing cooperative, CROPP ($928 million in annual revenue).
“We have two members of the current board, both sitting in seats that Congress had designated for someone who must ‘own or operate an organic farming operation’ but who were actually agribusiness employees when appointed to the five-year term on the NOSB,” said Mark A. Kastel, co-director and senior farm policy analyst at Cornucopia.
The voting records of these two agribusiness employees are significantly lower than those of the actual farmer members of the NOSB. In all, of the board’s fifteen members, six are a pro-corporate business voting block, and several others often vote with them. In other words, what we are seeing is a clear case of collusion between USDA and agribusiness.
Other Issues at the Meeting
The NOSB has also decided to rewrite the terminology for what are called Excluded Methods—language that encompasses all genetic engineering, and details what must be excluded from organic production. Will the new approach to GMO detection be a process-based approach, meaning if any GMO ingredient is used in the manufacturing process, the food is considered GMO, even if the GMO proteins are no longer detectable? Or will it be a product-based one, meaning that it is only considered GMO if proteins are detectable in the final product, regardless of what went into the manufacturing process? Organic consumers and environmentalists support a process-based approach as the more rigorous standard.
This will be an ongoing effort for the NOSB. At the meeting, we encouraged the board to remain open and transparent during this process and to seek public comment. We urged the board to stand up for its authority and fight this slippery slope into synthetic foods being passed off as organic. Laws allowing synthetic ingredients in organic food production should be construed in the narrowest possible sense, and any exemptions should not be made merely to make organic certification easier to attain for the largest commercial enterprises.
Also at this meeting, the NOSB began to tackle the question of genetically engineered vaccines in organic livestock production, which consumer advocates have been decrying for years. The board said it needs to create a list of the vaccines that contain GM components, but complained that this is a daunting and time-consuming task, and stated that the identification of GM vaccines may have to wait until after the new Excluded Methods definition has been established.
ANH-USA encourages the NOSB to act on GM vaccines in a timely manner and not turn the issue over to the USDA, who has shown a bias in favor of producers and has a clear conflict of interest with their support of biotechnology.
Action Alert! Tell the USDA to use a public and transparent process for all major changes to organic standards by publishing proposed changes in the Federal Register, and actively seeking public input and discussion. In addition, tell the USDA to enforce the sunset provision of the OFPA as it was originally intended—allowing synthetic products to remain after their “sunset” date only after public debate and a two-thirds vote of the NOSB. More than 100 synthetics will be up for sunset consideration in 2015. We must act now to protect the integrity of organics. Send your message today!