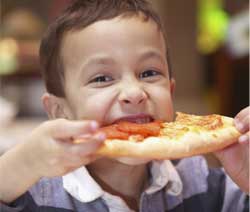 And will kids now be given even more genetically modified foods in their school lunches? It may well happen—unless we take action now!

The US Department of Agriculture has published a proposed rule to review nutrition standards for meals served through the National School Lunch and School Breakfast programs as part of the Healthy, Hunger-Free Kids Act of 2010.
The proposed rule would review standards for school meals for the first time in fifteen years. Nearly 32 million children participate in the program. The changes are based on the Institute of Medicine’s report, “School Meals: Building Blocks for Healthy Children,” which offered recommendations on ways to align the program with the 2005 Dietary Guidelines for Americans.
We certainly applaud attempts to make our woefully unhealthy school lunch programs more nutritious. But the USDA is far from a neutral body, and there are reasons why it should not be setting nutrition requirements for children.
First, it seems clear that USDA officials don’t pay attention to nutrition research. They advocate a low-fat, low-cholesterol diet that includes skim milk, yet such a diet can actually make people obese, as illustrated by research from the Weston Price Foundation. Certain fats are most definitely good for you. Besides olive oil and flaxseed oil (the latter is high in omega-3s), butter has proven nutritional benefits, as does coconut oil—we have written about its ability to treat or even help prevent Alzheimer’s, but it is good for us in many other ways as well.
Moreover, government food programs using USDA guidelines have notably poor nutrition plans as a result. For example, the government WIC (Women, Infants, and Children) program includes soy-based infant formula as an alternative to milk—despite the documented dangers to infants.
The emphasis on soy should not be surprising, given the agency’s close ties to Big Food and biotechnology companies. In the USDA’s new proposed rule for school lunch and breakfast programs, would our children be fed genetically modified foods? The agency is silent on this issue. Why? Again, because of the USDA’s active support for Big Food and biotech firms. The agency would never voluntarily make a stand against them.
This means USDA cannot be an impartial advocate for children’s health: there is an inherent conflict of interest. Not only a conflict, but confusion as well: although its nutrition guidelines continue to demonize fats and cholesterol, the USDA has a marketing arm called Dairy Management that actively pushes the sale of cheese and milk, even convincing Domino’s to add 40% more cheese to its pizzas!
Recent Wikileaks cables reveal the US government push for GMOs abroad—including a 2007 cable from Craig Stapleton, former US ambassador to France, mentioning a strategy of retaliation against the EU for refusing GMO seeds. In addition, the USDA is very likely going to deregulate GE alfalfa, and if it does, this will set a dangerous precedent for the deregulation of GE sugarbeets as well. This agency cannot impartially regulate the food industry—and certainly should not be in charge of what is fed to our children.
We must take action now. Citizens may now give USDA their input on the proposed rule for nutrition standards. Demand a complete ban on genetically modified foods in National School Lunch and School Breakfast programs because of the dangerous side effects of GMO foods!

20 responses to “USDA Wants to Update Nutrition Standards for School Lunches? Great Idea! —Except for the Terrible Nutrition Plans and the Glaring Conflicts of Interest….”