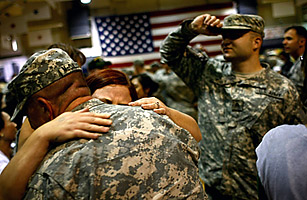 A former ANH-USA board member joined with Michelle Obama to announce an exciting new program to help veterans with traumatic brain injuries. A new Action Alert!

Health pioneer Dr. Paul G. Harch, associate clinical professor of medicine at Louisiana State University in New Orleans, will participate in the White House’s Joining Forces Initiative. The program will teach medical schools better ways to train new doctors to care for veterans’ needs, including hyperbaric oxygen therapy treatment (HBOT), the premier therapy for brain injuries and PTSD.
You may recall our article last month about Dr. Harch’s study which was published in the Journal of Neurotrauma—well, apparently someone listened after all. The White House is recognizing the importance of cutting-edge research like that being done in New Orleans. In her announcement, the First Lady discussed “the mental health challenges many of our troops face once they return home.” Dr. Harch joined Michelle Obama in making the announcement.
TBI and PTSD severely and disproportionally affect military who have served in Iraq and Afghanistan—approximately 546,000 have TBI, post-concussion syndrome (PCS), and PTSD, and yet their treatment options are limited. HBOT is an effective and economical treatment for PCS and PTSD, without the very dangerous and negative side effects of antipsychotic medication.
By participating in the initiative, LSU’s Health Services Center has promised to mobilize research and clinical care (including HBOT) to treat vets and their families. One important note, however: according to Dr. Harch, the Joining Forces Initiative has not officially committed to actually funding any of these research projects, only to sharing ideas and programs. He hopes the administration, having announced this initiative, will help fund the initiative since the medical schools and state budgets are cash-strapped.
In other good news, Dr. Harch has been awarded a $1.2 million government appropriation to further investigate HBOT for TBI and PTSD. This funding is greatly needed, since HBOT is currently FDA-approved for many uses, but not approved as a treatment for TBI or PTSD. This in turn blocks both use and payment.
With the White House spearheading this initiative, it could mean that the tide is turning, and FDA’s non-approval of HBOT for TBI or PTSD may be crumbling. Ditto DoD’s absurd refusal to use HBOT because it’s “off-label,” when the department already uses antipsychotic drugs completely off-label for treatment of TBI and PTSD. The president is the commander-in-chief of the armed forces, so if he listens to his wife (not to mention scientific leaders and citizens like you) and orders it, the DoD will fall into line.
Please write to President Obama today, thank him for the First Lady’s initiative, and ask him to take a strong leadership role in making HBOT the primary therapy for TBI and PTSD. You might mention that he is supporting the troops in a way that will save untold numbers of them from lives of misery after serving their country, and ask him to make sure the Joining Forces Initiative is provided funding so HBOT can actually be administered to our veterans. Please take action today!

5 responses to “Will the White House Finally Bring HBOT to Wounded Vets?”