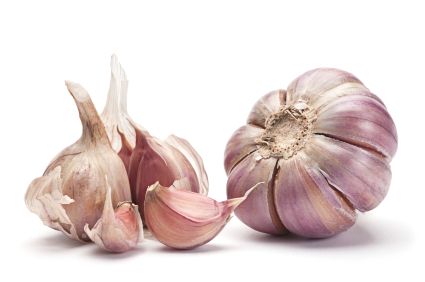 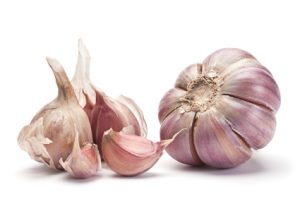 What you need is probably already in your kitchen.

Those unlucky enough to come down with a foodborne illness are usually prescribed antibiotics, which may wreak further havoc on their digestive and immune system, especially if not offset with probiotics. An alternative is raw garlic. Take a clove and cut it into four or more capsule-sized pieces, then swallow them whole without chewing. The “don’t chew” advice is important because raw garlic, once chewed, will be too hot for your mouth. Swallowed whole in capsule shape, it isn’t too hot to take and goes down readily. This can be repeated several times a day.

According to research published in the Journal of Antimicrobial Chemotherapy, a compound in garlic, diallyl sulfide, fights foodborne illnesses 100 times better than antibiotics. This research focused on the campylobacter bacterium, the most common bacterial cause of foodborne illness. The same bacteria also cause about one-third of the cases each year of the paralyzing disorder Guillain-Barré syndrome.

Other research suggests that, unlike antibiotics, garlic kills the bad bugs while leaving your good bacteria alone, and also kills a wide variety of bad bugs, not just campylobacter. Allicin, another compound in garlic, appears to be effective against E. coli, staphylococcus aureus, clostridium perfringens, and salmonella.

How does it happen that garlic would attack the bad bugs but not the good bacteria that are an essential part of our digestion and immune system? Nobody really knows, but research indicates that garlic is one of the top prebiotics—that is, food ingredients that stimulate the growth and/or activity of “good” bacteria in the digestive system in ways that are beneficial to health. Humans have been eating garlic for immense stretches of time, so it would be reasonable to suppose that our friendly bacteria have evolved to live with it while the bad bugs have not.

If correct, this is another example of why natural products tend to be safer on average, and often more effective, than the newly created, patentable substances known as drugs. Some natural substances are of course dangerous; some are poisons. But the odds of being poisoned by a natural substance on average are less than something completely new to nature, which our bodies are completely unprepared for.

Raw garlic is truly a wonder food. According to the Linus Pauling Institute, in addition to its antimicrobial activity (which includes viruses and fungal as well as bacterial infections), raw garlic helps lower “bad” cholesterol, is a powerful anti-inflammatory, may help atherosclerosis, lowers blood pressure, is an excellent antioxidant, and may fight a number of different cancers via multiple pathways.

In our personal (and therefore anecdotal) experience, garlic is the one thing to reach for if you have a foodborne illness. But there are other things to think of as well. Research has shown red wine to be effective in killing stomach bugs. For some reason, only red wine, not white wine or other forms of alcohol, is effective in this regard. Perhaps this is because of the higher resveratrol content in red wine. Indeed, other research has shown resveratrol itself to be helpful against foodborne infections. And if the infection is really, really serious, there is colloidal silver, but we will be discussing the research behind that in a future article.

10 responses to “And What If I Do Get a Foodborne Illness?”