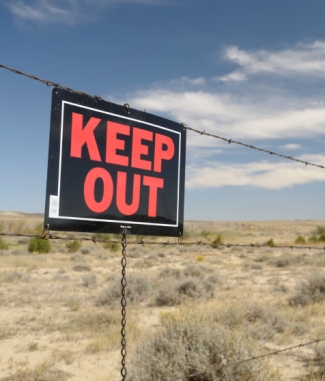 The agriculture industry is trying to make it a crime to be an undercover investigator at a factory farm. Goodbye, whistleblowers! Farewell, freedom of speech!

Last year, “ag gag” bills were introduced in a number of states. Happily, most were defeated due to overwhelming opposition from our grassroots activists, concerned citizens, and organizations of all political stripes. Unfortunately, many of these bills are back this year, and the dangers are even greater.
The bills introduced last year would have made it illegal to videotape or take a picture on a factory farm—even when an an illegal act was occurring. This is obviously unconstitutional; Iowa’s attorney general even told their legislature so.
This year’s bills would make it a crime to be an undercover investigator. A bill in Nebraska, for example, intends “to create the offense of obtaining employment at an animal facility with intent to disrupt  operations.” Imagine if such bills were passed—think of all the industries that would line up with similar bills to protect their illegal or unethical operations from your prying eyes!
The conditions in these facilities breed disease. Animals are preemptively fed a constant stream of antibiotics to prevent disease, which creates “super bugs”—bacteria that are resistant to antibiotics. Moreover, the antibiotics then get into the water table, which we also use and consume.
Both the animals and the people that work there are subjected to what can only be described as atrocities. Moreover, confining so many animals in one place produces much more waste than the surrounding land can handle. As a result, factory farms are associated with various environmental hazards, such as water, land and air pollution, and people who live in close proximity to factory farms often complain of high incidents of illness.
For years, undercover investigations have revealed conditions on some factory farms that result in extreme animal suffering, and the few safety mechanisms that exist for CAFOs (Concentrated Animal Feeding Operations) were created when conditions in these places were exposed and people took action. People have the right—and the responsibility—to know where their food comes from and under what conditions it was produced.
Though the language has changed somewhat in this year’s bills, they have the same intent: to shield agribusiness from public scrutiny by punishing whistleblowers.
In Iowa, SF431, referred to as the “Whistleblower Suppression Bill,” might be brought up for a vote at any time in the Iowa Senate. SF431 is an attempt by the factory farm industry to criminalize basic watchdog functions at factory farms: the bill would make it illegal to produce or possess a video or audio recording of the facility without prior consent of the facility owner. In addition, the bill defines a broad range of already illegal activities—such as trespassing, theft, and fraud—as “animal/crop facility tampering” and would place harsher penalties on these crimes than if they are committed anywhere else in the state. If you are an Iowa resident, take action now!
Nebraska’s LB915 is a new bill that forces CAFO employees to make a report within twelve hours of witnessing animal abuse, and tightens other requirements to make the reporting process more difficult—and ensures that only legitimate employees (who perhaps can ill-afford to lose their job) can make such a report by banning whistleblowers: “Any person who obtains employment at an animal facility with the intent to disrupt the normal operations of the animal facility is guilty of a Class IV felony.” If you are a Nebraska resident, take action now!
In Utah, HB187 would make an investigator “guilty of agricultural operation interference if the person, without the consent of the owner of the operation, records an image of, or sound from, an agricultural operation.” If you are a Utah resident, take action now!