This month in the Pulse, we told you how volunteers and staff delivered 850,000 signed petitions to county officials across California to put the California Right to Know Genetically Engineered Food Act on the ballot this November 6.
If voters pass the initiative, the GE Food Act will require mandatory labels on genetically engineered food. Because California is the largest economy in the United States, we believe the initiative will lead to nationwide labeling of all foods containing genetically modified organisms. 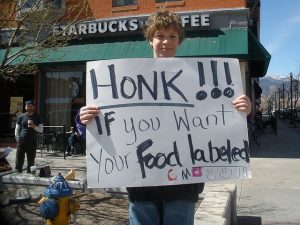 ANH-USA is a proud supporter of the California Right to Know campaign. That’s why this summer, I’ve directed our staff to cancel our semi-annual membership drive. That’s right—we’re not going to ask you to donate a penny to ANH-USA this summer. Why?

Monsanto and its “evil empire” have already begun tapping into their multi-million dollar war chest to spread lies and propaganda to defeat the GE Food Act. But 91% of American voters support labeling of GMOs!

Why is GMO labeling such a popular issue? Because GMOs have not been proven safe, and the long-term health risks on humans of genetically modified foods have not been adequately investigated. Many small-scale animal studies have connected consumption of GMOs to a host of health problems, ranging from allergies and malnutrition to liver disease and infertility, and many more too numerous to list here.

Every consumer must join together to stand up to Monsanto. Please give today, and please give as much as you can!

This May 26 is the 20th anniversary of the FDA’s disastrous decision to deny consumers the right to know whether their food has been genetically engineered or not. On this day, ex-Monsanto lawyer Michael Taylor (the current FDA Deputy Commissioner for Foods) declared that genetically modified food was “substantially equivalent” to naturally grown food, and therefore should not be subject to any additional regulations.
Between now and May 26, the Right to Know Campaign is attempting to raise a one million dollar money bomb to support the California GE Foods Act and other state GMO-labeling campaigns.
A group of “Right to Know” public interest organizations and organic companies, have pledged to match the first million dollars raised in this nationwide “Drop the Money Bomb on Monsanto” campaign. They include:

Let’s show the California Right to Know campaign the generosity that ANH-USA supporters are known for!

Sincerely,
Gretchen DuBeau
Executive Director, The Alliance for Natural Health USA
P.S. Together we are stronger! Please share this message with everyone who cares about the food they eat!

2 responses to “Drop the Money Bomb on Monsanto’s War Chest!”