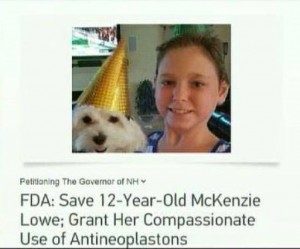 FDA tells Burzynski to seek approval. When he agrees, they use this as an excuse to let his patients die.Action Alert!

Trail-blazing cancer doctor Stanislaw Burzynski’s story really begins with dying patients who are desperate for access to unique, innovative care.
Although his clinic utilizes a broad spectrum of cancer treatments, Dr. Burzynski is perhaps best-known for his discovery and development of antineoplastons, which are peptides and amino acid derivates that activate tumor suppressing-genes. Antineoplastons have also been proven to be an effective cancer treatment via independent research by Japan’s Dr. Hidaeki Tsuda of the Kurume University Hospital. Until the 1990s, Dr. Burzynski used antineoplastons, sometimes in conjunction with traditional oncology agents, to treat and cure cancer patients.
Over the past several decades, the conventional medical establishment, via a succession of relentless attacks, has slowly choked off patient access to antineoplastons. After 1998, and at the insistence of the FDA, treatment with antineoplastons was limited to patients in registered FDA trials. Despite the incredible expense of FDA-registered clinical trials and the small likelihood that—given the FDA’s clear bias towards Big Pharma “cures” and their continued persecution of Dr. Burzynski—antineoplastons would ever win FDA approval, Dr. Burzynski has been able to treat patients with antineoplastons only via FDA clinical trials. This is yet another FDA “Catch-22”: they’ve forced Dr. Burzynski to conduct expensive clinical trials, with the full knowledge and likelihood that even after trials, antineoplastons would not be approved!
In July 2012, after years of failed legal attempts to shutter the Burzynski clinic, the FDA stopped allowing Dr. Burzynski to accept children for treatment with antineoplastons. In January 2013, this ban was extended to adults. This means that under current FDA restrictions, no new patients can be treated with antineoplastons. Terminal cases who could be saved by them will instead die.
Since the FDA has constricted patient access to antineoplastons, the only hope of dying patients is to convince the FDA to grant a “compassionate use” or “single patient protocol” exemption via its expanded access rule. This rule allows for the case-by-case use of an experimental or unapproved drug outside of a clinical trial if a patient has a serious or immediately life-threatening disease or condition, and has no other treatment options left.
With the FDA’s ban, many patients are desperately seeking FDA exemptions for access to antineoplastons. For example, shortly after a series of anti-Burzynski articles were published by USA Today, leading natural health pioneer Dr. Julian Whitaker’s Health and Healing newsletter revealed the stories of two young brain cancer patients and their desperate and so far unsuccessful battle to win access to antineoplastons:

Dr. Jonathan Wright, another natural health pioneer, also wrote a Letter to the Editor of the Tacoma News Tribune about the FDA’s refusal to grant compassionate access.
In the course of its decades-long vendetta against Dr. Burzynski, the FDA has become deaf to the suffering of those patients for whom antineoplastons are their last shot at living a full, normal life. The FDA’s refusal to grant McKenzie and Liza access to Dr. Burzynski’s treatment is particularly egregious, considering the extremely limited treatment options for DIPG. As Dr. Wright told ANH-USA, “Dr. Stanislaw Burzynski has cured DIPG in some individuals with his 100% harmless antineoplastons, and FDA is denying this woman and this girl antineoplaston treatment!”
When other doctors refuse to help, and death is imminent, shouldn’t patients have the option to try any treatment that could save their life?
Action Alert! Contact your senators and representative immediately and call for a full congressional investigation into the FDA’s violation of patient rights, particularly its refusal to grant compassionate exemptions to dying patients. Send your message today!