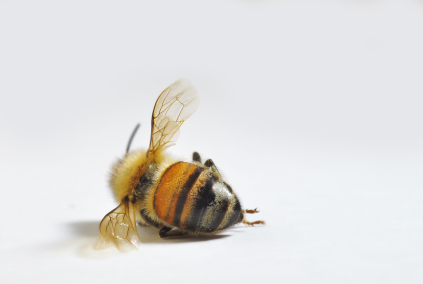 Instead of getting rid of the pesticides that are killing the bees, the ag industry wants to create a big new market for high-fructose corn syrup. Action Alert!

Since 2006, up to 40% of the bee colonies in the US have suffered Colony Collapse Disorder (CCD), in which honeybees die, disoriented, far from their hives. The honeybee pollinates a third of all the food we eat and contributes an estimated $15 billion in annual agriculture revenue to the US economy alone. Fresh fruits and vegetables, in particular, would simply not exist without honeybees.

As we reported in April, a study by the European Food Safety Authority has definitively linked CCD to neonicotinoid pesticides. At least 143 million of the 442 million acres—that is, nearly one-third—of US cropland is planted with crops treated with these neuroactive insecticides, which are related to nicotine and are highly toxic to bees. In the US, 100% of corn and canola is treated with neonicotinoids, as well as 65% of soybeans and almost all cotton, wheat, and smaller acreage crops. The pesticide expresses itself through the plants’ pollen and nectar—the honeybee’s favorite sources of food.

A recent Time magazine article notes a number of potential reasons for CCD, including deadly bacteria and viruses—but nearly all researchers agree that the main culprits are general chemical exposure and pesticides (neonicotinoids in particular). A study of honeybee pollen found nine different pesticides and fungicides in it on average.

Unfortunately, the agriculture industry doesn’t want their profitable pesticides tampered with: there are over 1,200 pesticides currently in use in the US, and many are made by the same companies that engineer the crop seeds. So instead, Big Farma has begun creating CAFO-like conditions for bees! It’s already happening on a small scale; many argue that it may be the only alternative if we don’t reign in the pesticides. “Bees may end up managed like cattle, pigs and chicken, where we put them in confinement and bring the food to them,” said one beekeeper and independent researcher quoted in the Time article. “You…do feedlot beekeeping.”

In these factory farm hives, commercial beekeepers have already begun to feed bees with sugar and high-fructose corn syrup rather than (or in addition to) honey made in the usual way. Some scientists worry that replacing honey with sugar or corn syrup will leave bees less capable of fighting off infections. We think the reality is even worse: the sugar will come from GMO sugar beets, and the HFCS from GMO corn. These, of course, could affect the health of the bees in the long run nearly as much as the pesticides do! You may recall the studies of GMO grains on small mammals in which the offspring became sterile by the third generation. What if all the bees were to suddenly stop reproducing?

Monsanto is working on other GMO “fixes” for CCD as well: they’re developing RNA-interference technology that will kill one of the viruses thought to be killing the bees, the Varroa mite, by interfering with the way the bees’ genes are expressed. In addition, scientists at Harvard are experimenting with tiny “robobees” that might one day be sent out to pollinate—though even if technologically possible, it’s hard to see how this would ever be economically feasible. Besides that, we just don’t know that much; there will always be unintended consequences.

Despite heavy lobbying by Bayer and Sygenta, the European Commission has decided to put a two-year restriction on some neonicotinoids while it gathers safety data.  In stark contrast, the US Environmental Protection Agency, heedless of the scientific evidence, released a report on CCD in which pesticides were not even mentioned as a potential cause! In 2011, the agency said it would review Bayer’s neonicontinoid pesticide—a review that still hasn’t been completed.

Recently, however, EPA announced that manufacturers of neonicotinoids must include a label to warn users of the risk to bees and recommend they restrict its use under certain conditions. In other words, while EPA is finally acknowledging that the pesticide can kill honeybees, the agency isn’t suspending or banning its use. Instead, they’re letting manufacturers off the hook by requiring only the barest minimum—labeling.

Action Alert! A new bill, HR 2692, “The Saving America’s Pollinators Act of 2013,” has been introduced in the House by Rep. John Conyers, Jr. (D-MI) and Rep. Earl Blumenauer (D-OR). It would suspend the use of neonicotinoids until the EPA can prove that the insecticide “will not cause unreasonable adverse effects on pollinators” (a term that includes native bees, honeybees, birds, bats, and other species of beneficial insects). This proof of safety would need to be in the form of published scientific research together with a completed field study. Please contact your representative and urge his or her support of HR 2692. Take action immediately!