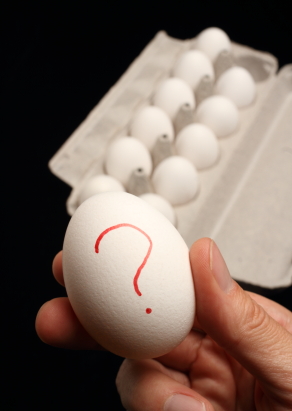 On August 13, egg producers issued a recall of over half a billion eggs that were contaminated with salmonella. Many brands were involved and it sounded like a national problem.

But it wasn’t: all of those 550 million recalled eggs came from just two farms. This underscores our point above that the safety problem is not in the small farms and operations, which will be so adversely affected by the food safety bills. It will increase the concentration in huge industrial farming CAFOs—Concentrated Animal Feeding Operations—where the sanitary problems are overwhelming. This is a breakdown in existing laws: the Wall Street Journal reported that daily inspections by USDA graders pointed to increasingly unsanitary conditions at one of the egg farms, but the agriculture agency didn’t flag the problems to the FDA.
Nobody is mentioning this, but the FDA, which gets vast new powers under the Food Safety bill, isn’t even fully in charge of animal waste on huge, industrial farms. That falls principally under the Environmental Protection Agency’s purview. Does the EPA have authority to do something about this problem? Yes. Is it doing anything? No.
As a result of the EPA inaction, a group of environmental organizations spearheaded by the Natural Resources Defense Council (NRDC) finally sued EPA to do its duty. In a settlement last May, the EPA promised to develop a plan within a year to deal with the problem of animal waste from industrial farming, which is probably the source of the contaminated eggs from the two farms. Don’t be surprised if the EPA doesn’t even meet this promised schedule.
So, if we do get Food Safety legislation this year, politicians will claim they have responded to the huge egg recall, when in fact they aren’t doing anything at all about the underlying problems which caused the egg contamination in the first place.
And what would happen if everyone eventually realizes that the Food Safety bills haven’t solved anything? You can be sure there would be even louder cries for more government action. That is the way it works: the more failures and unintended consequences we get from ill-thought-out government interventions, the more interventions we get.
The real answer is to step back from industrial agriculture by encouraging small producers. This is the exact opposite of what the Food Safety bills do, although the House bill is far, far worse, and represents a dagger aimed at the supplement industry as well as non-industrial farms. Please respond to both of our Senate bill alerts contained in the preceding articles.