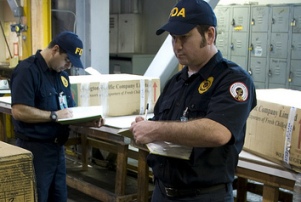 They no longer need evidence that a product is harmful. Just a suspicion that there’s an error in the paperwork.

The Food Safety Modernization Act (FSMA) was signed into law on January 4 of this year. For the past several months we’ve been sharing our concern over one of the FSMA’s mandates that eventually developed into the disastrous NDI draft guidance. There are only a few days left to tell the FDA what you think about these new anti-supplement rules—FDA’s public comment period ends this Friday, December 2. Please take action today, if you haven’t done so already!
There is another rule mandated by the FSMA, which is currently being implemented, that we also want to highlight. It gives the FDA wider authority to detain food products, including supplements. Under the previous law, in order to administratively detain food, the FDA had to show “credible evidence” that a food presents “serious adverse health consequences or death to humans and animals.” The new rule gives the FDA enhanced authority to detain any food or supplement they have “reason to believe” may be “adulterated” or “misbranded.”
Using the vague terms “misbranded” and “adulterated” as a standard to detain food is extremely problematic. It gives the FDA too much discretionary power against small food companies and dietary supplements and potentially allows the agency to detain food and supplements on even minor violations. Under the “adulterated” or “misbranded” standard, a farmer’s paperwork error could be treated just as harshly as a multinational corporation that knowingly sells tainted food.
As we’ve reported previously, a food or supplement may be considered “adulterated” under the Federal Food, Drug, and Cosmetic Act if some vaguely written FDA rule is deemed to have not been followed. “Misbranded” can mean that the producer makes a completely true statement about the product but without FDA permission. A cherry producer who cites peer-reviewed scientific research from prestigious universities on the health benefits of cherries would, in FDA-speak, have engaged in “false” and actionable “misbranding” which suddenly turns the cherries into drugs. Producers, of course, have the right to take cherries through the vastly expensive new drug approval process!
“Administrative detention” means that the FDA can now act without judicial oversight. It doesn’t even have to be true, since the FDA merely needs “reason to believe” that the product is misbranded or adulterated. This makes it an extremely subjective process. By its own admission, the FDA estimates that up to 48% of food detained could prove not to have been adulterated.
The food or supplement can be held for up to twenty days, with a possible ten-day extension if FDA wishes to initiate legal action. Many food products are perishable in that amount of time, which would have a severe impact on business, especially small businesses that could not cope with the loss.
This new, broader FDA food detention authority opens the door for the FDA to abuse its power and hold any supplement they believe has not filed an NDI notification. If the proper notification paperwork has not been submitted and officially accepted by the FDA, the agency considers them “adulterated” supplements—even though FDA’s interpretation of what a New Dietary Ingredient actually is and what the NDI notification process is supposed to entail are clearly contrary to what Congress intended when they passed the law. It also flies in the face of common sense.
This makes it extremely important that the NDI guidance be revised. As it stands now, the rules ensure that most dietary supplements will be found in violation of the FDA’s ludicrous interpretation of the NDI notification process.

There are only a few days left to make your voice heard on this absurd NDI guidance. If you have not done so already, please send the FDA your comments today!