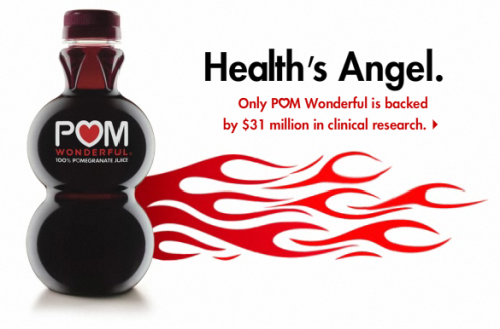 Breaking News: The Federal Trade Commission is being sued for prohibiting a juice maker from making health claims—even though the claims are true and supported by competent, reliable scientific evidence.

Juice maker POM Wonderful has filed suit against the Federal Trade Commission in US District Court, claiming the agency has created a new legal standard for the evaluation of deceptive advertising that tramples the company’s free speech rights.
Lawyers for POM, who include attorney Barry Coburn, say that the FTC’s new rules require advertisers to obtain prior FDA approval before making any health-related claims about food, beverages, and dietary supplements. They claim the FTC has created this new legal standard without going through the proper rulemaking procedures. In their complaint, they say that FTC told them specifically that no other claims can be made unless two double-blind, placebo-controlled studies are performed—and that this standard applies to the entire industry. (The current FTC standard is that claims must simply be supported by competent, reliable, scientific evidence.)
The agency denies making any new requirements, but we know that the FTC has been making such requirements on a company-by-company basis via consent decrees. The idea here is that once the FTC has moved against a company for any reason, they can then add these additional requirements on as pre-condition for any settlement. POM contends that the agency has no such regulatory authority, and thus cannot be making any such requirements.
Famed constitutional lawyer and Virginia-based attorney Jonathan Emord backs POM’s assertion that the FTC standards change was unconstitutional, and violated the First Amendment. “The agency cannot make unencumbered commercial speech dependent upon anything other than the requirement that the speech be non-misleading,” he said. “Speech not approved by FDA may be true. Speech not supported by a set number and kind of human trials may also be true. The constitutional burden of proof is on FTC to prove falsity in each specific case based on the precise content of the claim.”
Does all this have a familiar ring? It should. As we reported back in April, the recent Waxman/FTC provision in the House finance bill would have given the FTC the unquestioned authority it seeks to create this new standard for all food and supplement producers. Thanks to you, that provision did not make it into the final finance bill passed by House and Senate. It was a cliffhanger, with negotiations going into the early hours, but the outpouring of public protest stopped it.
Congressman Waxman once said that nothing in Washington is settled forever. We recently learned that he may attach the FTC provision to an Omnibus bill in the House during the lame duck session. The provision is easy to hide because it’s short but written in legal gobbledegook. We are working now to stop this ploy should it happen.
If the FTC and Waxman prevail, you can expect many functional foods and supplements to disappear from the shelves—or, if not, to cost much, much more.