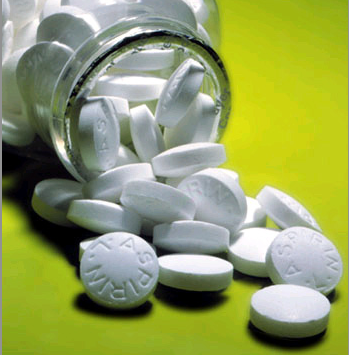 Can’t we give something natural a try first?

In March, two studies were published which suggested that aspirin may be an inexpensive and powerful weapon to fight cancer. This isn’t surprising. Aspirin is an anti-inflammatory and most anti-inflammatories seem useful against cancer.
Specifically, the studies showed that a daily dose of aspirin may significantly reduce the risk of many cancers, and prevent new tumors from spreading.
The downside? Daily or long-term use of aspirin doubles the risk of internal bleeding—and can cause hemorrhagic strokes—yet doesn’t reduce the risk of heart attack in people who have not previously had heart problems.
The gut lining protects itself from damage by producing nitric oxide (NO) and hydrogen sulphide (H2S). Now a scientist has developed what he calls “NOSH-aspirin,” which produces both gases as it breaks down, thus recreating the stomach’s protective mechanism.
Unfortunately, there are a number of serious concerns with this approach:

Using drugs as preventives—even an over-the-counter drug as commonplace as aspirin—is the best way for pharmaceutical companies to increase their profits: create a product, convince healthy people they need to take it every day, then make another product to deal with the undesirable side effects, which in turn will produce other undesirable side effects, and so forth and so on.
We have seen this script often enough. Doctors gave young women a medicine to keep their bones strong during breast cancer treatment, hoping to prevent complications and relapses. They learned that the bone drug actually improved survival rates as much as many chemotherapies do—so the women were kept on the drug indefinitely. But as we have reported previously, many bisphonates (bone drugs) have extremely detrimental effects on the body. They don’t help the body produce new bone, but just interfere with the sloughing off of old bone. One of the most gruesome possible side effects is jaw death.
Pharmaceutical drugs often contain or are coated with phthalates. Congress banned this substance in toys and children’s products, but FDA approved it for medication! Phthalates are hormone-altering industrial chemicals that can cause reproductive abnormalities, yet the daily dose of phthalates in some drugs is twice the amount considered safe by the Environmental Protection Agencies.
But back to the gas-filled aspirin. As noted above, aspirin targets inflammation. Granted, it does so with a sledgehammer, but it’s effective, and relatively safe for many people in small doses in the short term—but not for everyone, and not in larger doses, and certainly not in the long term, which is unfortunate since it is chronic inflammation that is so dangerous. Even mainstream medicine acknowledges that chronic inflammation is involved in all chronic degenerative diseases, and may be a root cause of both cancer and heart disease.
What conventional medicine ignores is that chronic inflammation doesn’t require anti-inflammatory drugs. It can be treated and reversed by making dietary and lifestyle changes. The Life Extension Foundation’s chronic inflammation protocol discusses the importance of:

Ginger and boswellia (a tree that produces the fragrant resin frankincense) are also excellent anti-inflammatories.
Conventional medicine in general, and the drug industry in particular, are about sick-care, not health-care. They put band-aids on symptoms and leave the root causes unaddressed, possibly because it is illness that keeps them in business.