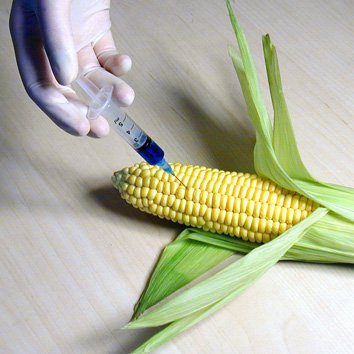 The FDA lied by omission about GE salmon, and Monsanto is attempting an end-run around USDA rules for GE beets. The stock market seems to be telling the true story.
But before we get into the latest political news about genetically engineered food, let’s take a moment to look at some recent science news.  A recent study published in the journal Nature found that what we eat creates genetic changes—which may then be passed on to our children. Our genes are controlled by billions of chemical markers on our DNA. And these chemical markers can be affected by many lifestyle factors, the most important of which is diet. While the genes themselves generally don’t change, what they are “told to do” is changed by the food we eat (both quality and amount) and the chemicals we breathe or ingest. In this study, a group of rats was given a high fat diet, and they developed symptoms of diabetes. When they reproduced, the rats’ offspring were not overweight—but their ability to produce insulin was impaired. Researchers think the sperm cells from the obese rats had a different pattern of epigenetic marks on their DNA, which created the insulin resistance in their pups.
It should come as no surprise, then, that genetically engineered foods are causing terrible genetic changes in mammal offspring.  Scientists are seeing birth defects, high infant mortality rates, and sterility in hamsters, rats, and livestock fed genetically engineered soy and corn. Some hamster pups even begin growing hair inside their mouths. What we eat changes the biology of our children and our children’s children, and may harm them irreparably.
With this in mind, back to government policy. Remember Frankenfish? It turns out that the FDA knowingly withheld the revelation that both the US Fish and Wildlife Service (FWS) and the National Oceanic and Atmospheric Administration’s National Marine Fisheries Service (NMFS) testified at a 2003 hearing that genetically engineered salmon must not be kept in open-water net pens because these transgenic salmon would threaten and adversely affect wild Atlantic salmon, currently on the Endangered Species List!
In an email, FWS staff wrote to NOAA and said, “Shortly after the Atlantic salmon was listed as endangered, several of us from USFWS and NMFS spent 2 days down in Maryland meeting with AquaBounty [creators of the bio-engineered salmon] and FDA about development of genetically engineered salmon and discussion around the need for FDA to engage in Section 7 consultation with the Services. We never heard a peep out of FDA or AquaBounty after that.”
In other words, even though such preliminary discussions with these expert fishery services took place, and the Services said such a hatchery operation must be prohibited, FDA never made this information public during the public hearings about AquAdvantage salmon. AquaBounty, of course, claims (with no proof) that the fish pose no threat to marine environments.
Then we have genetic engineering giant Monsanto. They paired with the German company KWS SAAT AG, one of the world’s leading plant breeders, to produce a variety of sugar beets containing the Roundup Ready gene. This gene ensures that the beets will tolerate applications of extremely toxic Roundup agricultural herbicides. But as we reported last year, a US district court ruled that they couldn’t proceed with production until the USDA completed a full Environmental Impact Statement (EIS), which will be ready in May 2012.
Monsanto and KWS didn’t want to wait. They filed a petition with the USDA for “partial deregulation,” which would allow them to continue production of the GE beets while the research for the EIS was ongoing—in other words, to let them totally circumvent the rules. And the USDA is considering it, and is accepting public comment on it for thirty days (hence our Action Alert below).
Sales of Montanto’s Roundup herbicide have collapsed this year under an onslaught of low-priced generics made in China. But that’s the least of Monsanto’s troubles. Weeds are becoming resistant to Roundup, dimming the future of the entire Roundup Ready crop franchise. This will lead to uncontrolled growth of “superweeds,” which may require ever more toxic herbicides—to everyone’s peril. On top of that, the Justice Department is investigating Monsanto for possible antitrust violations!
AquaBounty Technologies stock still hasn’t recovered from its losses this September after the FDA panel requested a delay in the approval of AquAdvantage salmon to study more of the data. Clearly the public’s confidence in genetically engineered foods is weakening.

Please write to the USDA’s Animal and Plant Health Inspection Service, and ask them not to approve partial deregulation of GE sugar beets. Until the EIS is completed, no one can say how much these genetically engineered organisms will harm the environment. Monsanto should not be allowed to play fast and loose with the regulations, potentially endangering our health. Please take action today!