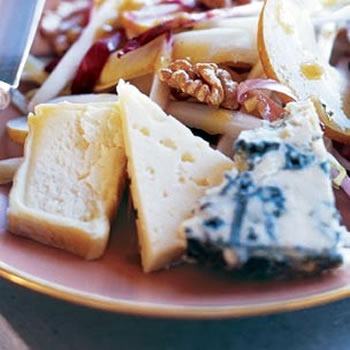 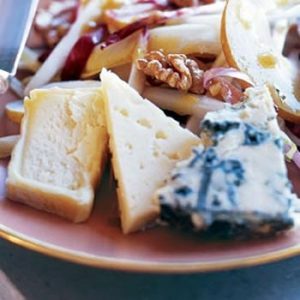 
Cheese, particularly real cheese, gets a bad rap. The American Heart Association makes “heart-healthy suggestions” to eat cheese with five or fewer grams of fat per ounce, and light or fat-free cheese products. The American Diabetes Association recommends low-fat cheese recipes—even though they usually contain more sugar! And the Physicians Committee for Responsible Medicine put up a series of billboards showing fat folks with the captions “Your Abs on Cheese” and “Your Thighs on Cheese.”

This is all nonsense. Cheese is actually good for you— especially when it’s made correctly, as is done in Europe by introducing bacteria at the right time and following a careful process. Artisanal cheese is hand-made from milk that comes from a single source (local whenever possible), and its creation focuses on the quality of its raw ingredients and the health of its animals. People are generally willing to pay higher prices because of its superior taste and health benefits. Cheese is the best source of vitamin K2, which the body needs (together with vitamin D) to process calcium correctly.

Unfortunately, artisanal cheese is not widely available in the US. There are some raw-milk artisanal cheese producers in some states, though not many. Several years ago, the FDA shut down the importation of most fine cheeses from Europe. Only a few larger companies—mainly offering pasteurized cheeses—are still allowed to import to the US, though as Cathy Goldsmith of Berkeley’s Cheese Board Collective points out, “The pasteurized versions are just not very good. They don’t ripen in the same way. They get flat and bitter as opposed to gooey and rich and multilayered in flavor,” and sales of pasteurized imported cheeses have dropped.

Of course, the industrialized, pasteurized, often tasteless cheeses are not only protected from competition; they also get tremendous economic support directly from the government. The government buys it and distributes much of it to school lunches where it is used mainly in pizza. You know, the same pizza which for the government counts as a vegetable because it has some tomato sauce. The USDA even has a marketing arm called Dairy Management that actively pushes the sale of cheese and milk.

How did we get so obsessed with pasteurization anyway? After World War II, retail milk’s competition was based on how much cream your milk had—the more the better—which was clearly visible because of “the cream line.” But this made the cheaper, less rich milk harder to sell. So the dairy industry started homogenizing the milk to do away with the cream line. That catch is that once milk is homogenized, if there is no further processing, it will go rancid in a matter of hours, which didn’t happen as quickly when milk was kept in its natural state. So pasteurization was mandated, first by states and then federally.

The FDA wants simple solutions and does not want to be blamed for food poisoning. So it likes large scale industrial solutions like pasteurization, especially ultra-pasteurization, and food irradiation (“nuking”). It has been alarmed about listeria in cheese for some time. The initial charge, and especially the attack on French cheese, came at the same time the French were refusing to support the invasion of Iraq. That is when French raw cheese was first banned and then only a few large producers were allowed to send it here.

Now the FDA, in conjunction with Health Canada, has just issued a joint risk assessment that claims consumers are “up to 160 times more likely” to contract a listeria infection from soft-ripened cheese made from raw milk compared to the same cheese made with pasteurized milk. Listeria monocytogenes has some of the highest fatality and hospitalization rates among pathogenic bacteria.

In fact, it’s the lack of damning evidence that is so striking. Between 1986 and 2008, the report could not account for one single documented illness in the US from listeriosis due to tainted brie or camembert (soft cheeses). The researchers were only able to document twenty occurrences of illness from listeria in all cheeses from all kinds of milk worldwide over the same twenty-three-year period—less than one per year—and, according to the report, half of these illnesses involved cheese made from pasteurized milk! Compare that to the frequency of other foodborne illnesses (more than 1,000 outbreaks, resulting in between 15,000 and 30,000 illnesses, from all foods each year in the US), and raw cheese has a demonstrably sterling record of safety.

Listeria usually comes from the cheese-making environment, not from the milk itself. The few problems that have occurred were almost all from unlicensed producers. On page 17 of the report, they show four outbreaks of listeriosis from soft cheese—but all four were from homemade raw milk queso fresco (nicknamed “bathtub cheese”) which was not aged the required 60 days. In other words, the only incidents have been from cheese that was already illegal in the US.

While the FDA has a zero tolerance policy for listeria, which effectively crushes raw dairy production, Europe takes a different approach. They have tolerance limits with strict quality control measures in place.

The FDA is making its draft risk assessment available for public comment.

The Weston A. Price Foundation, in its formal comments to the FDA, recommends that FDA rules on dairy take into account processes for raw cheese making, and that it should be sensitive to the size and scale of the operation. Unfortunately this runs contrary to everything the FDA seems to believe in.

Of course, cheese is not the only story here. Weston Price as a good deal to say about the health value of real butter—butter made from raw milk—which is naturally high in vitamin A, supports the immune system, is good for preventing arthritis and osteoporosis, and helps the thyroid gland and the gastrointestinal system. Butter generally sells for hardly more than cream, even though it is made from cream and takes a good deal more work to produce—which means there’s no price incentive for artisans to produce raw milk butters. Producers are further discouraged from making raw butter because the FDA makes it so difficult for them.