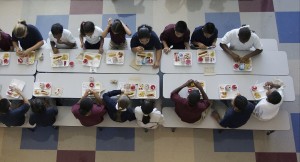 Don’t cheer yet—they’re spending all that money to get Pepsi to develop some processed food snacks for the kids!

Bloomberg reports that India’s government is seeking help from an unlikely partner to improve the diets of 107 million of its hungriest children: PepsiCo.
The current government has been in power for only three months, but it is already seeking to address the widespread corruption and lack of oversight that led to the death last year of twenty-three children in the eastern state of Bihar from lunches contaminated with pesticides. Unfortunately, they’re doing it all wrong: in an attempt to attract more foreign investment, restore economic growth, and boost investor confidence, the government has appointed a “food processing minister” who immediately reached out to Pepsi, the world’s largest processed snack food maker.
In other words, rather than addressing the fraud and cronyism at the heart of a grossly mismanaged school lunch program, the government seems to be exacerbating the situation with a handout to the junk food industry.
The Indian government has invested $2.2 billion (about 132 billion rupees) for the lunch program overhaul; Pepsi plans to double the country’s investment to just under $5.5 billion over next six years. The government asked Pepsi “to research and develop [processed food] products which will be healthy and will also contain proteins.” The government attempted to provide so-called healthy foods in 2011 with two snack foods—a cookie and a cheese puff—fortified with extra iron to help fight anemia, which can come from the lack of iron in many Indians’ diets.
India’s free school lunch program, the world’s largest, was created in 2004 to try to feed millions of poor children and encourage their enrollment in school. Children in government-run schools in India get lunches that consist of a combination of rice, bread, lentils, vegetables, and eggs. The government gives grain and money to local women’s groups to cook the hot meals.
The decision to have Pepsi develop “healthy” processed food snacks strikes many as wrong-headed. According to Vandana Prasad of the nonprofit Public Health Resource Network, “No respectable dietitian or nutritionist will recommend processed foods over freshly cooked meals. The government’s policy is to favor big business for everything, and hope that there will be some public good as a result.”
Pepsi was also asked to reduce the sugar content of their company’s beverages. The World Health Organization predicts that about 31% percent of adult men in India will be overweight by 2015, an increase from 22% a decade earlier. Already India has the world’s highest number of patients with type 2 diabetes, with rising obesity rates among children.
Food safety is vital, especially in a very poor country where disregard for hygiene protocols has led to cases of food poisoning. But greater safety guidelines should not come at the expense of nutrition and healthful food. We saw the same thing happen in the US with our recent food safety overhaul, which favors Big Farma and doesn’t address the CAFO/factory farm system that underpins many of our country’s food safety problems.
Predictably, while Pepsi stock isn’t doing so well now, it is expected to become extremely valuable in the future.