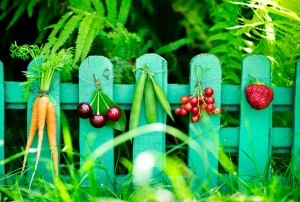 It’s higher in antioxidants and lower in pesticide residues.

A comprehensive new study published this week in the prestigious British Journal of Nutrition shows very clearly that how we grow our food has a huge impact. “If you buy organic fruits and vegetables, you can be sure you have, on average, a higher amount of antioxidants at the same calorie level,” according to lead researcher Carlo Leifert, a professor of ecological agriculture at Newcastle University in England.
This was a meta-analysis, that is, a study that collected and assessed hundreds of other studies. Although it stops short of making any health claims for organic food—it didn’t study how much of an impact switching to organic food could have on one’s health—it definitively shows that organic food contains a higher level of antioxidants, and the authors note that other studies have suggested that antioxidants have been linked to a lower risk of cancer and other diseases.
In addition, the study found that pesticide residues were dramatically reduced in organic foods. Conventional crops had four times the amount of pesticide residue, and significantly higher concentrations (48%) of the toxic metal cadmium. Cadmium, which also is present in cigarette smoke, can cause damage to the liver and kidneys at certain levels.
The study was undertaken, according to the researchers, because scientific opinion is “divided” on whether there are significant nutritional differences between organic and non-organic foods. This prompted them to carry out meta-analyses based on 343 peer-reviewed publications that indicate statistically significant and meaningful differences in composition between organic and non-organic crops or crop-based foods. The “substantially higher” concentrations of antioxidants were found across the board in organic foods—and in the case of a group of compounds known as flavanones, as much as 69% higher in the organic produce.
Dr. Jessica Shade, director of science programs for the Organic Center in the UK, says the new analysis “corrects many shortcomings of earlier studies” and “should put to rest any doubts about the benefits of organic. Based on the findings, if an individual were to switch from a conventional to an organic diet, they could receive a 20–40% increase in antioxidants.”