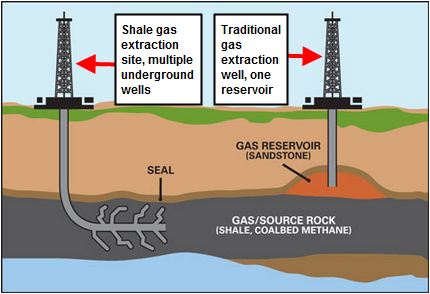 After last week’s article on the problems being created by hydraulic fracturing, some readers raised a couple of very important questions. We’re happy to provide some clarification.

“I live in an area where producers have been fracturing oil and gas wells for close to a century. I spent my career in oil transportation and I have never heard of the kinds of problems you suggest are arising in Pennsylvania. Something is amiss—either the wells are drilled and serviced with inferior materials or regulations surrounding wastewater disposal are too lax or ??? or ???. I have a hard time believing the fracking itself is the problem since it’s a refinement of a very old technology.”

The old method of natural gas extraction was simply to dig a hole straight down into trapped natural gas, which sits in a kind of natural reservoir, and then capture that gas as it takes the path of least resistance up to the surface. The modern method of hydraulic fracking is radically different. New drilling technology allows a hole to be dug straight down and then be turned sideways and extended in multiple directions horizontally. Here is a diagram:

The holes are then pumped full of water, sand, and chemicals at very high pressure. This literally splits the rocks open to capture natural gas that was stuck inside them.
The concrete and steel well linings used in hydraulic fracking frequently rupture under the violence of this mining method, and the 2005 Halliburton exemption exempts these wells and sites from the Clean Water Act and other regulatory laws.
Another reader writes,

“I get email from ANH and commonly sign petitions. You have a new article about fracking that talks about strontium causes cancer and bone problems. It’s actually the opposite, you need to rewrite this. You have bad information, and I won’t sign because of bad information on the mineral strontium. I know from studies I’ve read it increases bone density better than any drugs out there, safer, natural, it depends on the type of strontium. Please rewrite the article and letter and I’ll think about signing after its been rewritten.”

“Four landmark studies have been conducted in the last five years, uncovering amazing increases in bone mineral density with Strontium supplementation. Strontium is a common element which is naturally found in your bones. Studies show supplementation with strontium in its various forms is well tolerated and completely safe. Strontium lies directly below calcium on the periodic table of elements and that makes calcium, strontium and magnesium all in the same chemical family. They are all naturally occurring metals found in the soil, in foods, and in your body. As an alkaline earth element, strontium is similar to calcium in its absorption in the gut, incorporation in bone, and elimination from the body through the kidneys.

“Strontium is naturally present in trace amounts with around 100 micrograms in every gram of bone, so when you supplement with strontium you are simply making more of this element available for incorporation into your bone. Several forms of strontium salt have been used in clinical studies and each strontium salt has had positive results for bone, so it appears that strontium is the active component, and not the carbonate, ranelate, lactate, or citrate part the strontium is attached to. Strontium inhibits bone resorption while simultaneously stimulating bone growth, an exciting double benefit. No other natural substance or drug is known to provide this dual effect.

“Strontium appears to help reduce dental caries according to a ten-year study sponsored by the US Navy, where residents of a small town had unusually high levels of strontium in the municipal water supply.”

First, we must apologize because a phrase was inadvertently dropped during the editing process. We have revised both the main article and the Action Alert to say that “strontium…is necessary in trace amounts for bone development, but in too large amounts can disrupt it and cause cancer.”
The problem is the difference between strontium supplementation, and the low levels of naturally occurring strontium that we might be generally exposed to, and the tremendously high levels of strontium released by the fracking process. Just think of the myriad substances that are quite beneficial when taken in small amounts—belladonna springs quickly to mind—but which will kill you when taken in sufficient quantities.
A study published in the Journal of Petroleum Technology focusing on the concentrations of selected important contaminants in Pennsylvania from Marcellus Shale flowback water found that approximately 3,280 mg/L of strontium—or 16,737 pounds—are released every day into the Monongahela River. It is in those high concentrations that strontium poses a risk of bone cancer, cancer of the soft tissue near the bone, and leukemia.
Interestingly, a radioactive form of the mineral, strontium-89, is being administered along with chemotherapy drugs and is being studied in the treatment of bone pain caused by some types of cancer, whereas strontium-90 may actually cause bone cancer.
Lenntech, which does water treatment for many different industries, says this about strontium: “Strontium compounds that are water-insoluble can become water-soluble, as a result of chemical reactions. The water-soluble compounds are a greater threat to human health than the water-insoluble ones. Therefore, water-soluble forms of strontium have the opportunity to pollute drinking water. Fortunately the concentrations in drinking water are usually quite low….When strontium uptake is extremely high, it can cause disruption of bone development. But this effect can only occur when strontium uptake is in the thousands of ppm range.”
You may be interested to learn about a new book called Your Bones: How You Can Prevent Osteoporosis and Have Strong Bones for Life—Naturally. It’s by Lara Pizzorno, managing editor for Longevity Medicine Review and senior medical editor for SaluGenecists, Inc., and occasional ANH-USA contributor Jonathan Wright, MD. One of the book’s big revelations is that the medicines prescribed to prevent osteoporosis should be your last choice for healthy bones: not only do these drugs have terrible side effects, they also don’t build healthy, new bone—instead, they cause retention of old, brittle bone and can lead to jaw death.
Your Bones will be available on May 1 from Praktikos Books. Feel free to contact them and reserve an advance copy.