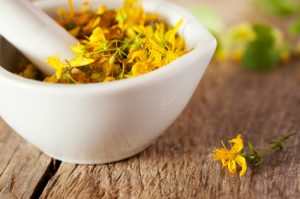 Not if pharmacists have their way! Action Alert!
Pharmacists Planning Service (PPS), a “public health, consumer, and pharmacy education” nonprofit, is petitioning the FDA to change the designation of St. John’s Wort from “herbal dietary supplement status” to “behind pharmacy counter status” (BPCS)—a designation that requires pharmacist consultation—citing dangerous side effects and drug interactions.
PPS’s claim is specious. St. John’s Wort (Hypericum perforatum) is far safer than prescription depression medications. Unlike those medications, it has not been linked to addiction, suicide, or violent behavior. It also appears to be effective and has been used for many years in Germany and other countries to treat mild depression, especially in children and adolescents. A meta-analysis found that “the hypericum extracts tested in the included trials a) are superior to placebo in patients with major depression; b) are similarly effective as standard antidepressants; c) and have fewer side effects than standard antidepressants.”
The “fewer side effects” issue is an important one. A 2000 study found that SJW “was superior to fluoxetine [Prozac] in overall incidence of side-effects, number of patients with side effects, and the type of side effect reported.” Similar studies found SJW superior to other SSRIs (selective serotonin reuptake inhibitors) as well. This actually understates the side effects risk issue for adolescents and young people. Black box warnings on SSRI’s warn of suicide risk for these groups; they should warn of violent behavior risk but do not. The FDA does not want to admit the evidence linking the drugs to violent behavior, including mass shootings.
Another, older class of antidepressants is TCAs (tricyclic antidepressants), which, according to a study from early 2011, are at least as effective against depression as SSRIs (this is faint praise, since SSRI’s have not been proven to be very effective). Although TCAs are slowly being replaced by SSRIs, they are still extremely popular: according to Pharmacy Times, in 2011 the most commonly prescribed drug in the US was a TCA called amitriptyline (sold under the trade names Tryptomer, Elavil, Tryptizol, Laroxyl, Saroten, Sarotex, Lentizol, and Endep).

Amitriptyline’s side effects range from anxiety, panic attacks, chest pain, sudden numbness to one side of the body, sudden severe headache, and problems with vision, speech, or balance, to suicidal ideation, hallucinations, seizures, and bleeding from the nose, mouth, vagina, or rectum.
Antidepressant drugs of all kinds are huge money-makers for drug companies: Antidepressants are used by 11% of Americans. Use has increased 400% over ten years. And, of those taking them, 60% report using for more than two years. Seven of the top eighteen prescribed drugs are antidepressants.
Because it is safe, effective, and relatively inexpensive, SJW poses serious competition to the US pharmaceutical industry. The thought of more and more people turning to an over-the-counter herb instead of relying on pharmaceutical drugs has pharmacists running scared. In addition, there is currently an oversupply of pharmacists, which has had the effect of reducing pharmacists’ wages by 20% on a national scale. This oversupply will only continue as e-prescribing increases, the pharmacy technician’s role is expanded, and pharmacy benefit managers restrict distribution channels and force patients into the mail-order system. This would seem to be a case where PPS does not really have consumers’ interests in mind, but instead are trying to protect their own bottom line from competition.
We do not know the exact percentage of prescriptions that are filled by pharmacists (as opposed to pharmacy technicians), though certainly the majority are. We do, however, know that prescription antidepressants were the second most frequently dispensed prescriptions in the US in 2010 (they were beaten out by statin drugs and other lipid regulators), with over 253.6 million antidepressant prescriptions filled. SJW is direct competition because it doesn’t require prescription, and therefore doesn’t require a visit to the pharmacy for access.
The math is simple: higher SJW sales means fewer antidepressant prescriptions, which means fewer prescriptions for pharmacists to fill, which means fewer pharmacists employed.
If PPS is successful in its petition, St. John’s Wort will no longer be an easily accessible alternative to prescription drugs. PPS has a history of putting pharmacists between consumers and even over-the-counter products as much as possible—for example, the organization advocates mandatory pharmacist/consumer consultations and patient history checks.
Let’s look further at PPS’s claim that SJW is unsafe. According to NIH’s National Center for Complementary and Alternative Medicine (NCCAM), SJW’s potential side effects are mild; they include dry mouth, dizziness, gastrointestinal symptoms, and an increased sensitivity to sunlight. PPS claims that SJW caused one death through an interaction with cyclosporine. However, the author of the article PPS quoted as evidence was unable to provide us with an accurate citation after we reached out to him. FDA does not have this death on file.
The petition mentions that two recently approved hepatitis C drugs contain a SJW drug interaction warning in their package inserts, and notes that SJW should be avoided if the patient is taking certain other drugs. But since 2000 the American Herbal Products Association (AHPA) has had in place a guidance policy recommending that SJW products be labeled with a warning not to take SJW while taking any prescription drugs without the advice of the prescribing physician. In other words, PPS is simply acknowledging what the supplement industry has known for many years: some St. John’s Wort ingredients can interact with certain drugs—information that is already disclosed through the broad use of the warning label.
SJW should not be placed behind the counter. Not only is it a safer alternative to prescription antidepressants—and there are very few treatments for mild depression on the market at all—but making its purchase contingent on a consultation with a pharmacist also places one more hurdle between consumer and natural treatments. Such a move might dissuade the consumer from taking SJW (which is, of course, PPS’s hope). It would also give a false impression of that SJW is dangerous.
The very idea that pharmacists are in a position to counsel on the use of SJW is ridiculous. Quite apart from the conflict of interest, pharmacists in the US, unlike in Germany, know nothing about herbs. They are in no way qualified to give advice on the subject.
We wish that pharmacists were qualified to give advice on herbs and other supplements. We also wish that so-called drug stores were healthy places that did not make almost all their money  from a combination of  junk food and drugs. In this respect, these stores are emblematic of what is wrong with American health: first create a problem with poor diet and then mask the problem with prescription drugs that control symptoms,  do not cure, and may be highly toxic themselves. This is one money-making machine we do not need.
There is no specific timeline for this petition: FDA has not yet responded to PPS’s petition, and it is still open for public comment. Action Alert! Please tell FDA that St. John’s Wort is a safe and time-tested remedy for mild depression, that the safeguards already built into the system with the warning on the label are completely adequate, and that druggists do not have the qualifications to play any such advisory role. No reclassification to “behind the counter status” is even remotely warranted. Please write to the FDA today!

2/13/2013: An earlier version of this article stated that TCAs are a newer class of antidepressants than SSRIs. TCAs are actually older, which the article has been edited to reflect.