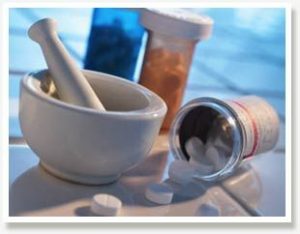 Millions rely on compounding pharmacies for natural hormones and other critical drugs. Will we lose them to a congressional/FDA power play?

About 14,000 patients received injections in the spine for back pain using steroids from the New England Compounding Center (NECC), based in Framingham, Massachusetts. According to the US Centers for Disease Control, 214 fungal meningitis cases in ten states have been connected to the injections, with the bulk of them in Tennessee (53), Michigan (41), Virginia (34), and Indiana (28). As of Monday, fifteen people have died.
Compounding pharmacies are terribly important to the integrative health community for several reasons. They combine or alter ingredients to create custom drugs that meet the specific needs of individual patients, such as a smaller dose or the removal of an ingredient that might trigger an allergy in a patient.
Very importantly, they also make compounded bioidentical hormones such as the estriol so many women take instead of dangerous synthetic estrogen replacement products like Prempro or Premarin. There are also complete thyroid products and many others. Compounders may also put natural hormones in a cream to be applied to the skin, which is by far the best way to take them. For some reason, drug companies generally put them into pills that must go through the stomach and liver system, which may change hormones in undesirable ways.
The bad steroid shots were different and do not fit this model. They were mass produced and somehow became tainted with fungus. Some older patients (the median age of those affected is 68) have experienced fungal meningitis symptoms, including headache, fever, stiff neck, and sensitivity to light, a few have suffered strokes, and some have died. This is a terrible tragedy that should never have occurred.
According to Reuters, emails to a customer indicate that the center sold drugs to doctors without seeing proof of individual patients’ prescriptions as required by Massachusetts law. However, it is not illegal for healthcare providers to buy in bulk from licensed pharmacies like NECC, so further investigation will be necessary before we know all the facts in this case.
From a natural medicine perspective, one also has to ask: why are doctors injecting powerful steroids into the backs of elderly people? Ostensibly for pain relief. But is this a safe or effective or lasting approach to pain relief? One thing we know for sure is that such powerful steroids are very hard on the bones, so is it sensible to inject something like this right into the spine? No one in the mainstream media to our knowledge is asking these questions—or is likely to.
Reps. Rosa L. DeLauro (D-CT) and Edward Markey (D-MA) have both announced they will introduce bills focusing on compounding pharmacies. We have also learned that Sen. Richard Blumenthal (D-CT) plans to propose giving the US Food and Drug Administration more authority—despite the fact that FDA already has more than enough authority to have prevented this tragedy. In fact, FDA sent the NECC a warning letter in 2006 “detailing significant violations witnessed” by investigators the previous year. The agency identified a problem at the facility but seems not to have followed up.
So what is the real purpose of these new bills from Reps. DeLauro and Markey and Sen. Blumenthal?
Some of the proposals for the bills being circulated would effectively outlaw all compounded drugs by classifying them as “new” drugs. In current law there is something of a blurry line on when a compounded drug becomes an entirely new one and therefore subject to the FDA drug approval process. In the past, FDA has tried to argue that any changes to the approved drugs used in the compounding formula—even changing the delivery method from oral to intravenous, for example—would make the compounded drug a new drug and therefore subject to the drug approval process.
Compounding pharmacists and doctors have argued that this is fully within the practice of medicine, which is regulated at the state level. The courts have agreed that it’s important for doctors to be able to prescribe individually tailored drug formulas for patients if what is needed is not commercially available.
If new legislation were to give FDA explicit authority to require compounded drugs to pass through FDA’s outrageously expensive drug approval process, it would dramatically limit the medications that practitioners could prescribe and patients could take. Many compounding pharmacies would be forced out of business.
Big Pharma is already using the NECC problem as an opportunity to ramp up attacks on compounded pharmacists. They want to eliminate the competition that compounding pharmacies present. Moreover, they’re suddenly questioning whether bioidentical hormones (which are made by compounded pharmacies) are safe in light of the scandal—they’re trying to scare practitioners with malpractice threats. Bioidentical hormones like  estriol have long been under attack by the FDA and drug companies, essentially working together. Compounding pharmacies may also offer complete, time-release, desiccated thyroid compounds, which can be difficult to find elsewhere. Most thyroid medications made by drug companies are not complete, and some of these important thyroid medications are never available in time-release versions.
ANH-USA will be working on Capitol Hill to preempt any bad legislative language, and ensure that any bill that is introduced will not threaten consumer access to compounded drugs. Although Big Pharma has enormous clout on the Hill, a few compounders—generally the ones who mass produce drugs—are big donors too (such as the California compounding company owner who donated over $1 million to a super PAC supporting President Obama). So it is difficult to predict how the money politics will play out.
Regardless of who is at fault in the tragic NECC meningitis case, this isolated incident—one where the FDA has full authority to act but failed to do so—should not be used to justify a whole new regulatory paradigm that will benefit the pharmaceutical industry alone while reducing access to important medications for the rest of us—including special-needs populations such as the autistic and those sensitive to particular ingredients or full potency drugs.