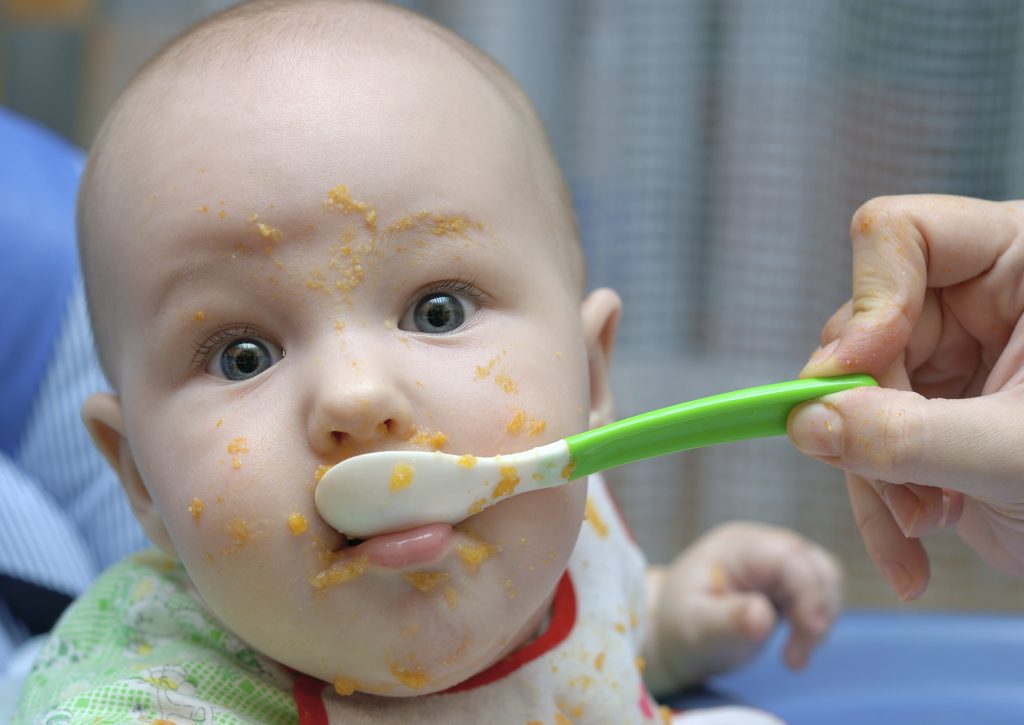 The NOSB—a division of the USDA—is responsible for regulating all organic crops and determining what can be called “Certified Organic.” The board is meeting next week, and on the agenda will be whether to allow eight synthetic substances in organic baby food, primarily in organic infant formula.
The substances in question—ascorbyl palmitate, synthetic beta-carotene, a proprietary form of lutein, synthetic lycopene, synthetic l-carnitine, synthetic l-methionine, synthetic taurine, and nucleotides—all have organic alternatives, are not nutritionally necessary as additives, and might be difficult for the infant’s body to process.
In particular, ascorbyl palmitate (AP) and synthetic beta carotene are used as preservatives in infant formula to prevent them from oxidizing and becoming rancid. However, organic standards state that synthetic ingredients cannot qualify as organic if their primary purpose is as a preservative. The International Formula Council, which is trying to get them included, is hoping to sneak around the restriction by never using the word “preservative” in its justification, instead calling them “antioxidants” and saying they “prevent rancidity.” AP has no nutritional value; its sole purpose is to extend shelf life. This is the very definition of a preservative—and the opposite of an organic product. More to the point, organic alternatives exist for AP (such as rosemary extract and tocopherols) and also for synthetic beta carotene.
The NOSB background materials say “it remains inconclusive whether or not the body actually utilizes ascorbic acid that is metabolized from ascorbic palmitate,” which makes AP particularly unsuitable for infants.
A synthetic substance is never supposed to be in organic food unless (a) it is essential and (b) there is no organic alternative. None of the above substances qualify for either of the two requirements. Manufacture of this particular brand of lutein is a proprietary secret, so even the NOSB does not know if it is synthetic or not. They are thus hardly able to certify that the product is harmless!
This, however, may not mean much to the NOSB. As we reported last year, the NOSB approved synthetic ARA and DHA, both of which were genetically engineered and used toxic extraction methods.
At this board meeting, the NOSB will also discuss the use of GMO vaccines in livestock. For Certified Organic foods, GMO vaccines cannot be used unless they are specifically added to the approved list (and none has been added to date). However, there have been reports of organic farmers using them anyway, and the National Organic Program has so far been unwilling to enforce the law against them. The NOSB should demand compliance from the NOP, and ask them to review all information on vaccines to determine which are organic and which are prohibited because they are genetically engineered.
Why is the NOSB allowing such dilution of the organic standards? The New York Times reports that more than 250 nonorganic substances have been added to the list of allowed substances in organic foods, up from 77 in 2002. Some of these substances are dubious, to say the least: besides the aforementioned GMO DHA, carrageenan—a frequently seen additive in organic foods—has no nutritional value and is only used as a thickening agent; it was approved as a food additive in 1995 based on a deficient technical review by scientists who had corporate ties.
The US Department of Agriculture, which took over organic standards in order to control them, is in actuality no fan of organic agriculture. But the department is very responsive to big food companies. And as we noted last month, the vast majority of organic brands are actually owned by Big Food companies, with only a limited number of independent organic brands still around. Some of these major corporations have seats on the NOSB—and they, of course, are the biggest advocates for allowing synthetics.
Take a look, for example, at General Mills. Last year, a General Mills exec was sitting on the NOSB when the inclusion of DHA was being decided. The company that manufactures DHA sometimes uses technology licensed from General Mills to make it. Coincidence? Of course not. Big Food has an interest in promoting genetic engineering and nanotechnology, since they have invested so much of their R&D budget into them.
Three seats on the board are designated for consumer advocates, but they have never been filled from traditional advocacy groups, instead going to corporate executives. Sometimes Big Food execs are shoehorned into seats on the NOSB: an executive from Driscolls, the huge California berry producer, was given a seat that was supposed to be filled by someone who “owns or operates an organic farming operation.” She resigned after a major public outcry, but later rejoined board in a different capacity.
Action Alert! Please write to the National Organic Standards Board. Ask them to prohibit the use of synthetic substances in organic baby food—especially synthetic substances that are used as preservatives and have no nutritional value. Also ask the NOSB to strongly recommend that the National Organics Program exercise its oversight and prohibit GMO vaccines from being used on organic livestock.