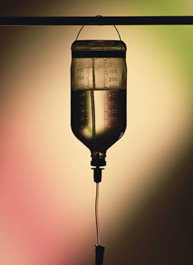 Not only are doctors being advised to reject chelation therapy—they’re being asked to report on their colleagues who practice it.

The American College of Medical Toxicology held a conference at the US Centers for Disease Control and Prevention (CDC) this past February about the “use and misuse” of chelation therapy—a misleading title suggesting some semblance of scientific objectivity, which was nowhere in evidence. The conference was more like a Salem witch hunt in which chelators played the role of the accused witches and warlocks.
Why is chelation so threatening to mainstream medicine? There is no disputing that heavy metals are extremely toxic. The human body is engineered to remove small amounts daily, but not the large amounts we often pick up from modern sources. One of those sources has of course been vaccines, which have used mercury as a preservative (it is still used in the US flu shot). Another source has been dental “silver” amalgam, which also contains mercury. This may be part of the reason for the hostility to chelation.
How does the therapy work? One method involves injecting into the patient’s bloodstream organic chemicals, which can bind and remove the heavy metals in the bloodstream (metals which are toxic to humans and interfere with various physiological functions). There are also oral or suppository supplements for chelation, and some foods are natural chelators (e.g., cilantro and chlorella).
Chelation therapy has been used by many physicians and administered to thousands of patients since 1952. An informal survey of our readers revealed that body detoxification—whether through chelation, or through sauna or special dietary methods—is among their top ten most popular integrative therapies. The National Institutes of Health is currently studying EDTA chelation for cardiovascular disease in the TACT trial. (EDTA is used for lead and other heavy metals but not for Mercury. Other chelators are used for that.) Many people have doubted whether a US government agency could be expected to produce a fair evaluation. The jury is still out on that.
Doctors attending the conference received continuing education credits for attending and hearing all the chelation-bashing. Various topics seemed designed to highlight the dangers of chelation—while attempting to dismiss the benefits.
A look at the PowerPoint slides (available as PDFs downloadable from the conference’s website) reveal the following:

Equally revealing is who else was represented at the conference, either as attendees or as panelists: the FDA and the Federation of State Medical Boards!
In the FDA’s session (“Unapproved Chelation Products Available Over the Internet”), the agency tried to conflate unapproved chelation products with the supposed dangers of dietary supplements. But “unapproved” chelation products are already illegal, and FDA is already empowered to enforce against them. Moreover, these products have nothing to do with the regulatory status of dietary supplements.
The FDA has the power to regulate interstate commerce of drugs and devices, and has used that power to clamp down on the sale of chelation products. In 2008 the agency released a Public Health Advisory on EDTA—simply because inattentive hospital personnel mixed up the medications being administered! In 2010, the FDA ordered eight companies to stop marketing over-the-counter chelation products. Our sources told us FDA was aware that many integrative doctors were doing heart-related chelation, and hoped that by blocking one particular form of EDTA, these doctors might be put out of business.
The presence of the Federation of State Medical Boards (a private organization largely controlled by the AMA) is especially troubling, as they could take this misinformation, adopt anti-chelation policies in each state, and target doctors who practice chelation therapy. In Kentucky, for example, doctors cannot discuss chelation therapy with their patients lest they face revocation of their license. Indeed, almost all Kentucky physicians who use alternative therapies have been either forced out of state or forced to desist from using alternative therapies, especially chelation therapy, because it “departs from prevailing practice in the State of Kentucky.” This is all too common, to one degree or another, in most states.
As the central federal agency for providing information on disease and public health issues, the CDC (which led a session as well as hosting the event) is in a key position to spread bias and misinformation on chelation.
We were also told that “Quackbuster” Stephen Barrett was a key participant. The Quackbusters are a group of self-proclaimed skeptics of any medical or health modality that avoids drugs, surgery, or radiation; they attack almost all nonconventional healthcare practices as quackery—regardless of the scientific research to the contrary. Two-time Nobel Prize winner Linus Pauling is on their quack hit list, along with many well-known and respected doctors and scientists, including Deepak Chopra, Andrew Weil, and dozens of others. The Quackbusters run over seventy websites, so millions of people are exposed to their propaganda.
Unfortunately, integrative physicians who practice chelation therapy fear being vocal about it lest they be targeted by their state medical boards. Let us be clear: chelation is in no way a “public health danger.” If you want a real public health danger, you need look no further than many parts of conventional medicine. Gary Null points out that mainstream medicine kills nearly 800,000 people every year through physician mistakes, hospital-related illnesses, and reactions to FDA-approved medications. That’s the equivalent of six jumbo jets falling out of the sky each day, and more than the number of American casualties in the Civil War and World War I combined.

165 responses to “Removing Heavy Metals from the Body Is “Dangerous”?”