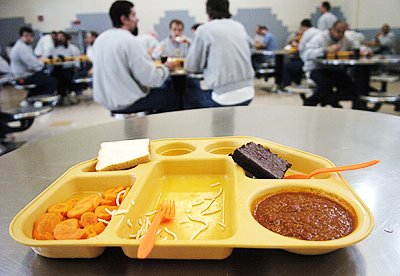 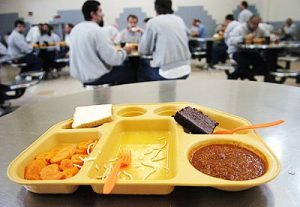 Seven prisoners say it’s happening to them—and their health is being damaged because of it.

The Weston A. Price Foundation is seeking an injunction against serving Illinois prisoners soy-laden meals as a source of cheap protein. And now a judge has ruled that the lawsuit will go forward.
The use of soy in Illinois prison meals seems to have begun when Rod Blagojevich was elected governor of Illinois. Beginning in January 2003, inmates began receiving a diet largely based on processed soy protein, with very little meat. In most meals, small amounts of meat or meat by-products are mixed with 60 to 70 percent soy protein; fake soy cheese has replaced real cheese; and soy flour or soy protein is now added to most of the baked goods.
There are three types of soy products: raw soy, which is poisonous to humans; processed soy products such as soy milk; and fermented soy products such as miso. Although tofu is not exactly fermented, it is usually classed as a fermented soy product. Although processed soy foods are often thought of as “health foods,” knowledgeable researchers consider them risky, and quite unlike the healthier fermented soy products.
The Weston A. Price Foundation has been a leading voice on the dangers of processed soy foods, especially when consumed in large amounts. The lawsuit claims that six plaintiffs are suffering bodily injury and adverse health effects from being fed too much soy, and alleges that the private corporation that runs the prison, Wexford Health Sources, Inc., and its doctors have been negligent in failing to provide adequate medical care because of the soy overload. One Florida inmate is also suing, and it might become a class action suit. Weston Price is picking up court fees.
In 2007, the Weston A. Price Foundation began hearing about soy-related health complaints, including chronic and painful constipation, diarrhea, vomiting, sharp pains in the digestive tract, passing out, heart palpitations, rashes, acne, insomnia, panic attacks, depression, and symptoms of hypothyroidism, such as low body temperature (feeling cold all the time), brain fog, fatigue, weight gain, frequent infections, and thyroid disease.
Most soy in the US is genetically engineered. GMO soy is grown on 91% of US soybean fields. And, as we reported previously, GMO soy has been linked to infant mortality in hamsters, with complete sterility by the third generation.
Soy is highly estrogenic, and can interfere with our absorption of iodine, reduce fertility in women, trigger early puberty, and disrupt fetal development. Dr. Joseph Mercola lists just a few of the health effects that have been linked to soy consumption (though not to fermented soy products such as tofu and miso):

The Weston A. Price Foundation has compiled a wealth of information about soy and soy products, including numerous scientific studies on their website, which is a treasure trove of information on many subjects ranging from diet to roots canals. The recent court ruling emphasized how important scientific and medical testimony will be at the trial, so it should be a most exciting case to watch.

62 responses to “Should Anyone Be Force-Fed Soy?”