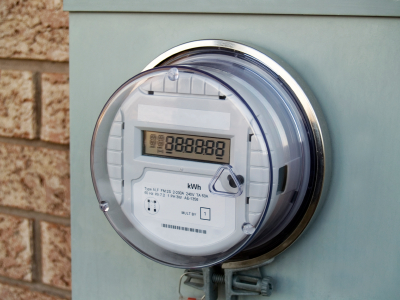 Monopoly utility companies across the country are installing radio frequency “smart meters” in your home. If you don’t want them, too bad: it’s take them or live without electricity. Meanwhile, RF is being investigated as a carcinogen.


Smart meters (including the SmartMeter, a trademark of SmartSynch, Inc.) are digital meters that have been increasingly in use since the 1980s. The new radio frequency (RF) smart meters include a small one-watt radio that allows two-way communication between the customer’s home and the utility company. A smart meter transmits non-ionizing radio waves, just like cell phones, baby monitors, microwaves, and Wi-Fi.

There are a number of health concerns with the smart meters. The California Council on Science and Technology, the FCC, and the FDA all claim this technology is safe. However, as early as 1972, there were already over 2,000 studies showing negative health effects from RF radiation.

Most of the research has centered on cell phones. There have been multiple reports, mostly out of Europe’s premier research institutions, of cell phone use being linked to brain damage, early-onset Alzheimer’s, senility, DNA damage, and even sperm die-offs (many men, after all, keep their cell phones in their pants pockets or attached at the hip).

In 2008, scientists from thirteen European countries reported that after a decade of cell phone use, the chance of getting a brain tumor—specifically on the side of the head where you use the phone—goes up as much as 40 percent for adults. An independent study in Sweden last year concluded that people who started using a cell phone before the age of 20 were five times as likely to develop a brain tumor. Another study reported a nearly 300 percent increased risk of acoustic neuroma, a tumor of the acoustic nerve.

Louis Slesin, who has a doctorate in environmental policy from MIT and in 1980 founded an investigative newsletter called Microwave News, suggests that much of the comfort of our modern lives depends on not caring, or refusing to recognize the dangers of microwave radiation. “We love our cell phones. Americans are not asking the questions, maybe because they don’t want the answers.”

Certainly the government does not seem to want any answers. Early on, it exempted cell phones from any FDA review, principally because the telecommunications industry asked it to do so.

As for smart meters, there have already been thousands of reports of negative short-term health effects where the meters are already in place. Complaints range from dizziness to heart palpitations, migraines to sleep disturbances, exhaustion to forgetfulness and confusion, nausea and vomiting to constant thirst, increased blood pressure to anxiety and an overall decrease in functionality. These reports, like drug or supplement adverse event reports mentioned in our other article in this issue, represent correlation rather than causation, as scientists say. But clearly more investigation is needed. One should also consider the cumulative effect of radiation exposure from the other wireless technologies coupled with this new wave of radiation.

The World Health Organization previously claimed RF technology posed no threat, but recently reversed its stance, classifying cell phones as “possibly carcinogenic.” President Obama’s Cancer Panel also recently issued a cautious recommendation of limiting exposure to RF wireless technology, calling cell phones a possible carcinogen. While both WHO and the Cancer Panel are careful to say that the technology was only “possibly” dangerous or carcinogenic, it is significant that such important bodies should—in the face of RF’s widespread use—say anything cautionary at all about it.

Radio frequency radiation is also currently under investigation as a carcinogen by the National Toxicology Program. Children are far more susceptible to the effects of microwave radiation than adults due to their thinner skulls and developing DNA. The science is at best inconclusive. If scientists worldwide cannot agree about the safety of these meters, surely that is reason to give pause before their mass deployment across the country.

There are other concerns as well. Smart meters are vulnerable to hacker attack. A sophisticated hacker might use the data to figure out when you’re away on vacation and your house is vulnerable to burglary. And if a hacker were to infect smart meters with malware, it could disrupt the electric grid and cause widespread power outages. According to CIA director Leon Panetta, hacking into the Smart Grid “brings down the financial system, brings down our government systems. You could paralyze this country. And I think it’s a real potential.”

Moreover, smart meters may suffer from problems with billing accuracy. Two major utilities in Texas have confirmed that some customers received inaccurate and sometimes inflated bills after turning to SmartMeters to measure their energy usage. And PG&E, which provides gas and electricity to two-thirds of California, also admitted to inaccuracies with the meters.

The Maryland utility company PEPCO has announced plans to install smart meters in Prince George’s County and Takoma Park beginning this summer. At present there is no opt-out option in Maryland for the smart meters.

Even if one were able to opt out, however, one could still be sickened by a neighbor’s device, at least in the confines of an apartment building. Of course, if you refuse to allow the smart meters, the company will threaten to turn off your power completely.

The extent of this issue depends where you live in the country. In many areas there is only one power company. In others, options may exist, but because there is only one infrastructure—one set of power lines—even if you purchase your power from an alternate company, the power still travels down the lines of the primary power company to your home and is metered by that power company. So if you purchase 5 kwh of power from a wind farm, the wind farm will pump 5 kwh into the power grid, which is operated by your vertically integrated power company (PEPCO, PG&E, etc.). Either way, there is a monopoly company that can shut off your power.

In Virginia, for example, the power company Dominion Resources Inc. plans to install smart meters to all their customers’ homes—and they have already installed half of the Smart Grid meters in Charlottesville. If you choose not to use the smart meters, you choose to have no grid power at all—and that is not a viable choice for most people.

This situation can be changed! Every state in the US has a public utilities commission (PUC). The exact powers and authorities given to a PUC vary from state to state, as each PUC was created by state legislation, but most PUCs are to some degree under the control of the state legislature, in the sense that their mission is to enforce state code as it relates to utilities. Legislation at the state level can be written to ban or, at the very least, allow customers to opt out of having a smart meter without losing their access to power altogether.

Maine residents have secured the right to opt-out of smart meters, but they must pay a penalty surcharge.

Many local jurisdictions in California have banned or issued moratoriums on smart meters, but the electric utility claims the bans are not legally enforceable and smart meter installation continues in much of the state. An opt-out plan for California will be voted on by the California PUC later this year. We will keep our eye on this and will issue an Action Alert at the proper time.

A plan to install smart meters throughout Maryland was killed last summer, but as we noted above, a new plan is now moving forward with installation in Prince George’s County and the incorporated city of Takoma Park (both of which border Washington, DC). And further north, Baltimore Gas and Electric will begin installing smart meters in all the homes, businesses, schools, and clinics in its jurisdiction beginning in October, 2011, and plans to have the Smart Grid “fully operational in mid-2014.” Maryland Residents Against Smart Meters (MRASM) has been organized to oppose the installation.

If you are a Maryland resident, please write to your legislators and the Maryland Public Service Commission today. Ask them to mandate an opt-out provision for the installation of smart meters.

30 responses to “Should You Have a Say about What Goes On in Your Home?”