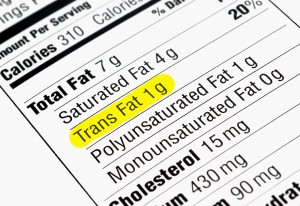 The FDA seems to be waiting for GMO soybeans to be ready before it follows through on its promise to ban the toxic fats.
A new study published in the journal Preventing Chronic Disease, available on the CDC’s website, shows that Americans are consuming much more trans fat than they realize. A federal loophole allows food companies to label foods with up to 0.5 g of trans fat per serving as having no trans fat at all. If each serving contains half a gram of trans fats, and most people eat more than one serving at a meal (and do the same at their other meals), a great number of people are consuming significant amounts of trans fats when they thought they were avoiding them altogether.
This comes on the heels of the FDA’s promise last year to ban trans fats (following a lawsuit and public pressure). However, the agency has taken no further action, and their proposed rule to ban trans fats still has not been finalized.
Because of this labeling loophole, consumers shouldn’t rely on the meaningless “0 g of trans fats” claim and should instead search the ingredient list for “partially hydrogenated vegetable oil” or “vegetable shortening,” as both are indicators that there is trans fat in the product despite what the nutrition label says.
Why the big wait? The FDA has not committed to a timeline to issue a final rule; the agency often lets draft rules linger indefinitely (using various stalling techniques) until Big Food is ready. In this case, the FDA is likely waiting for two new soybeans that have been genetically engineered by Monsanto and Dupont to be “low in trans fats” to hit the market:

As Dr. Jonathan V. Wright notes in his Health and Nutrition newsletter, the food industry and the federal government are addressing the problem of trans fats the wrong way. The Dupont soybean, for example, has been engineered so that its enzymes are blocked, and no long-term studies have been conducted on the ripple effect this may have on health. Dr. Wright also makes the point that GMO plants are more likely to be sprayed with toxic herbicides.
There are natural ways to reduce your risks from trans fat. As Second Opinion Newsletter notes, trans fats become toxic through a chemical process in the body. A study has found that natural vitamin A—trans-retinol—can stop our body from making this transformation.
Retinol is one of the so-called “animal” forms of vitamin A. It is convertible to other forms of vitamin A. When converted to the retinal (retinaldehyde) form, vitamin A is essential for vision, and when converted to retinoic acid, it is essential for skin health, teeth remineralization, and bone growth.
Some experts consider supplemental vitamin A to have a narrow margin of safety and instead recommend beta-carotene, which is “pro-vitamin” A. Your body converts it to retinol, but not necessarily in the amounts you really need. It is best to get retinol from your diet. Foods rich in retinol include eggs, butter, cheese, whole milk, fish, and meat, especially liver. Colorful plants like carrots and spinach are rich in beta-carotene, but not retinol. And since your body can’t convert enough of it to retinol, vegetarians could be at some risk for vitamin A deficiency. This is borne out by studies showing that night blindness, a symptom of vitamin A deficiency, is more prevalent in societies that don’t eat animal food products.
As we noted last October, some of the best integrative doctors consulted by ANH-USA consider vitamin A at high doses (over 100,000 IU a day) an excellent antiviral.

4 responses to “The Trans Fat Ban that Never Was”