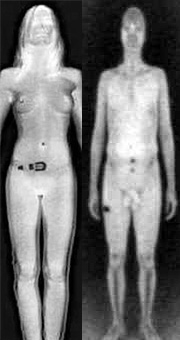 Forget the embarrassment of your private parts being seen by strangers. The scanners can cause cancer—and TSA is trying to keep you from knowing about it.

The Transportation Security Administration (TSA) uses two types of body scanners. The backscatter machines are of particular concern because these X-ray scanners emit low levels of radiation and can cause cancer. The European Union has even put a moratorium on the scanners in light of the cancer threats—member states have been told not to install scanners until scientific assessment of risks has been carried out, and they will be banned completely in April if experts find them dangerous—but the US has so far swept the safety issues under the carpet.
According to a ProPublica/PBS NewsHour investigation, up to 100 US airplane passengers could get cancer from the machines each year. As reported by Natural News over a year ago, some noted scientists think that the risk is actually far higher than this because of the particular way that these machines operate, and they wrote TSA with their concerns. They described how the majority of the machine’s energy is delivered to the skin and the underlying tissue—not distributed throughout the volume of the entire body—so the dose to the skin may be dangerously high. This means that the ionizing radiation from the naked body scanners may pose a much higher risk of cancer than one might be assumed from the total radiation emissions, an observation that has so far been totally ignored.
Of course, the backscatter machines violate the longstanding principle that humans shouldn’t be X-rayed at all unless there is medical benefit.
It should be noted that each exposure to radiation is additive, so frequent flyers are at significantly greater risk. According to Dr. Dong Kim, Rep. Gabrielle Giffords’ neurosurgeon and chair of the department of neurosurgery at the University of Texas Medical School, “There is really no absolutely safe dose of radiation…and there is no need to incur any extra radiation when there is an alternative.”
Through a regulatory loophole, airport X-ray scanners do not receive oversight because they are not used for medical purposes. In fact, the FDA decided not to hold a public comment period on the scanners and, spurred on by a heavy lobbying campaign, allowed the machines to fall under the voluntary standards set by a nonprofit group that is heavily influenced by industry. Industry was also allowed to do the testing on its own machines.
After the release of the ProPublica report, TSA Administrator John Pistole agreed to conduct a new independent study of the health effects of backscatters. But now the TSA is refusing to honor its commitment to conduct that safety study. At a recent Senate hearing, Pistole claimed that a draft report on the machines by Department of Homeland Security’s inspector general (IG) might make an independent study unnecessary.
The IG’s report has not yet been released, but based on a summary received by ProPublica there is concern that the report does not in fact independently assess the safety of the machines, but merely assesses how well the TSA is inspecting, maintaining, and operating them!
Forcing millions of people through these scanners at airports without conducting a proper safety assessment—especially in light of known cancer concerns and warnings of concerned scientists—is a violation of their rights as well as a public safety risk.