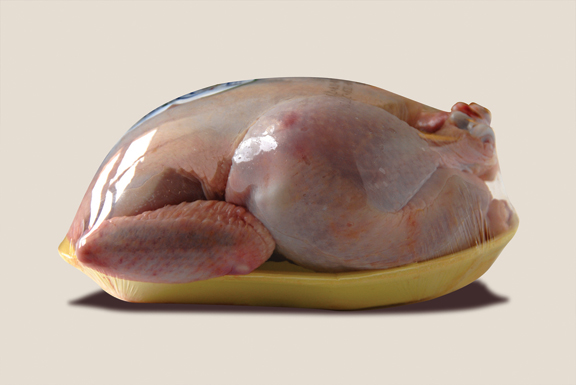 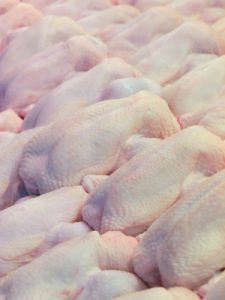 They talk of “modernizing” and “streamlining,” but what does this really mean? Action Alert!
It appears to mean that filthy chickens will now be “sanitized” using twice as many dangerous chemicals.
The Obama Administration is proposing the implementation of “new methods in poultry inspection.” Simultaneously, the USDA has proposed new regulations to create just such a system—an expansion of a pilot program that has been running since 1998—which would be nationally implemented this year, with hopes to have it completely in place by 2014.
What are these “new methods” that would “modernize poultry slaughter inspection” and “remove unnecessary regulatory obstacles to innovation?” Fewer inspectors, less oversight, and, to compensate, an increased reliance on “antimicrobial intervention”—generally the use of high levels of chlorine or “antimicrobial agents other than chlorine [that reduce] APC, E. coli, and Salmonella at a level equal to or better than chlorine.”
The overhaul would:

Typically, poultry is sprayed with water and chemicals inside and out, moved through spray cabinets where they are showered with other chemicals, and are finally chilled and soaked in water containing between 20 and 50 ppm of chlorine. The new proposal would also let chemicals be used on “air-chilled” birds, which currently rely on low temperatures to kill pathogens or at least discourage their spread. The proposal also encourages the use of chemicals along the processing line, not just at the end.
The chemicals used in poultry plants are, of course, poisonous: their job is to kill bacteria, but they are dangerous to humans as well. According to the Washington Post, a federal poultry inspector named Jose Navarro died—his lungs bleeding out—after six years of inspecting plants where these chemicals were used. Another USDA inspector, Sherry Medina, developed a severe respiratory infection one month after the Tyson Foods plant in Alabama where she worked began using peracetic acid. “I would walk into the plant, and I’d start wheezing. It was like I was choking to death. I coughed so hard, I broke two ribs,” said Medina, who now collects disability.
Two dozen USDA inspectors have described reactions such as asthma, severe respiratory problems, burns, rashes, irritated eyes, and sinus problems (including ulcers) to the chemicals being used. Two of the most common chemicals (chlorine and paracetic acid) have been linked to emotional disturbances, damaged internal organs, and even death. We tell USDA workers about the risks to their health from using these chemicals, but we don’t tell the American public a word about the risk of eating chemically treated birds.
The USDA has provided almost zero hard data on what the pilot program has achieved, but according to a private report to the House Appropriations Committee, USDA plants already use accelerated line speeds, and workers are being exposed to larger amounts of “sanitizing” chemicals than ever before. A Freedom of Information request covering the pilot program by Food & Water Watch revealed that employees are failing to catch defects in poultry carcasses. One reason for this is the increased speed of the lines coupled with the reduced number of inspectors. The other is that there is no requirement that non-USDA inspectors receive any training at all.
“The agency claims that the salmonella rates in the pilot project plants are lower than the rates for plants that receive conventional inspection. But given the GAO criticism of the design of the program and the fact that production practices can easily be manipulated during government testing periods, [USDA’s] claims are suspect,” said Food & Water Watch executive director Wenonah Hauter. Moreover, for many of the chemicals used, the government has not conducted any independent research on their safety for consumers who eat the food. As usual, they instead rely on data provided by chemical manufacturers themselves!
Having fewer inspections and using more chemicals is what you get when your only focus is the “bottom line.” The government will save about $90 million over the next three years though staff reductions, and poultry plants will increase their bottom line by $260 million per year. With less oversight and faster inspection lines, they can process more poultry in a shorter period of time.
The irony is, while USDA wants to save money on poultry plants, they want to spend money on horse plants! Horse slaughter was effectively banned in 2006 when Congress said USDA couldn’t spend any money on horse slaughterhouse inspections, but that prohibition expired in 2011. Last week the USDA gave its approval for a new horse slaughterhouse in New Mexico, with similar plants seeking approval in Missouri and Iowa. Horsemeat cannot be sold as food for humans in the US—but it can be exported. And, as Mike Adams noted, it may well turn up in the US food supply anyway because it can be sold to Mexico for human consumption, then re-labeled and shipped back into the USA for use as a low-cost meat filler.
The government and the poultry industry is once again ignoring what real food safety is: local, sustainable animals fed a natural, organic diet and treated humanely—the fundamental principles of biodynamics—not ever more industrialized, mechanized, and chemicalized! Food from CAFOs is neither safe nor nutritious.
Action Alert! Tell USDA and President Obama not to finalize these new “modernized” and “streamlined” regulations. Explain that it is the overcrowding and inhumane treatment of animals that result in the filth and disease that the chemicals are supposed to treat, and using even more toxic chemicals on our food is not the answer. Tell them the rules should instead emphasize the need for a reconsideration of confined animal feeding operations, slower processing line speeds, cleaner facilities, more inspections, and better-trained employees.