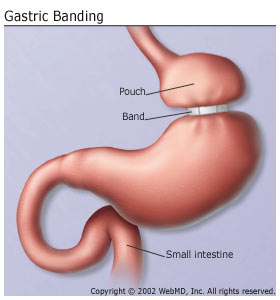 The procedure may help more people shed the pounds. But it will also fill the coffers of surgeons, hospitals, and a global specialty pharmaceutical company.

About 100,000 people each year have laparoscopic surgery to implant a small, flexible band—the Lap-Band, from Allergan, Inc.—on their stomach. It’s designed to help them lose weight by dramatically limiting their food intake.
More than a third of all American adults are obese. About 15 million of them meet criteria for gastric banding surgery under existing guidelines, but last week an FDA advisory panel recommended expanding use of the device to patients who are less obese—a pool of about 12 million more people.
The Lap-Band was developed as an alternative to gastric bypass surgery, a permanent procedure in which food is rerouted from a pouch in the stomach to the small intestine.
Experts stress that the Lap-Band cannot stop deeply ingrained behavior that drives people to overeat. Risks of gastric banding include ulceration, gastritis, difficulty swallowing, dehydration, constipation, weight regain, and death. The band can leak or slip, the stomach can slip or become blocked, and the band can erode into the stomach.
And it is an expensive procedure, which can range from $14,000 to $20,000. The device itself costs $3,000. And insurers are often reluctant to pay—which is why doubling the pool of potential patients is such a boon to the pharmaceutical company that makes it.
Another FDA advisory panel recommended the approval of a weight-loss drug called Contrave. The panel said the benefits of the diet pill outweigh the dangers of elevated pulse and blood pressure. They also said a large study on the cardiovascular risk of the drug can wait until after the drug is approved.
Wait. They’re going to approve a drug and then see if it’s harmful?
Contrave is a combination of two already-approved drugs that target different parts of the brain which influence appetite and cravings. The pill contains bupropion, an antidepressant also used to quit smoking, and naltrexone, a treatment for alcohol and painkiller addiction.
Note that many studies show the addictive qualities of conventional antidepressant drugs. So, under cover of providing a weight loss pill, millions of people may end up being hooked on an antidepressant.
The FDA had two stated standards of effectiveness for any weight loss drug it reviews. It is supposed to help patients lose at least 5% of their weight over 56 weeks (for a 300 pound man, that’s only a 15 pound loss in the course of more than a year), and it is supposed to show at least a 5% benefit over a placebo. Contrave met the first standard, and failed the second. The panel is recommending its approval anyway.
This comes on the heels of drug giant GlaxoSmithKlein petitioning the FDA to stop supplement producers from making any weight loss claims at all about their products. If the petition is approved, only FDA-approved drugs would be able to make weight loss claims. If Contrave is approved, as now seems likely, it may well lead the FDA to say yes to the Glaxo petition. Up to now, the FDA has been held back by the fact that so many weight loss drugs have been proved to be dangerous and failed to make it through the approval process.
You may wish to review our Action Alert on the subject from October (which among other things discusses the awful side effects of the Glaxo product). If you have not already done so, please send your message to the FDA. Tell them not to allow pharmaceutical companies to use the Citizen Petition process for their own financial gain.