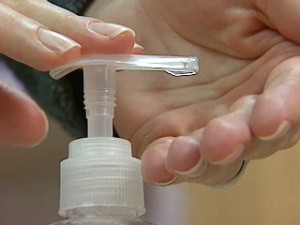 And instead use pro-biotics for the skin? Meanwhile, must we try to kill every germ on us, good or bad, with triclosan? Action Alert!

The New York Times Magazine recently ran a story about a fascinating new product, a spray called AO+ Refreshing Cosmetic Mist, from a small biotech company AOBiome. The spray contains billions of cultivated Nitrosomonas eutropha, an ammonia-oxidizing bacteria (AOB).
AOBiome scientists believe these bacteria act as a kind of pro-biotic for the skin. Once applied, they become a built-in cleanser, deodorant, anti-inflammatory, and immune booster by feeding on the ammonia in our sweat. The MIT-trained chemical engineer who invented AO+, David Whitlock, noticed that horses will roll in dirt after the getting sweaty: they are actually collecting the bacteria that transform the ammonia into nitrite and nitric oxide.
Whitlock’s first test subject has been himself; he sprays himself daily with AO+. He trusts his skin’s bacterial colony to keep him clean and says he has not showered for the past twelve years, although he occasionally takes a sponge bath to wash away grime. Others in the start-up company now do the same—and the reporter noted that none of them in any way conveyed a sense of being “unclean” in either the visual or olfactory sense.
The reporter, Julia Scott, tried the spray on herself for one month as an experiment. After about a week’s transition, a new colony of N. eutropha had started living on her skin—which became softer and smoother, rather than dry and flaky, “as though a sauna’s worth of humidity had penetrated the skin.” Her complexion, prone to hormone-related breakouts, was clear—for the first time ever.
Soon, AOBiome will file an Investigational New Drug Application with the FDA to request permission to test more concentrated forms of AOB for the treatment of diabetic ulcers and other dermatologic conditions.
At the other end of the spectrum—polar opposite to the use of probiotics on the skin—are antibacterial soaps, particularly those containing triclosan. In 1978 the FDA proposed to regulate antibacterial soaps and allow on the market only those it determined were safe and effective. However, the agency created a loophole for most of the chemicals: the FDA stated there was not enough data to say the chemicals were safe or effective, yet allowed them to stay on the market until the agency finalized its proposal.
Nearly four decades later, the FDA has still never made a final determination, but triclosan’s use in consumer products has mushroomed—it’s now found in an estimated 75% of antibacterial liquid soaps and body washes sold in the US. The chemical is also found in mouthwash, toothpaste, and toys.
Bowing to pressure, the FDA’s researchers finally plan to deliver a review this year on the effectiveness and safety of triclosan and a close relative, triclocarban, used in bar soaps. The agency then plans to take action by 2016. Depending on what the FDA finds, a $1 billion industry could be affected.
There is mounting evidence that the side effects of triclosan and triclocarban are dangerous:

For all these reasons, the Kaiser Permanente system of hospitals banned triclosan in 2010.
One doesn’t have to look far to find other examples of toxins that the FDA has refused to study despite wide human exposure: BPA, non-ionizing radio waves (used in smart meters, cell phones, baby monitors, microwaves, and Wi-Fi); GMOs; and the non-therapeutic use of antibiotics for animals, which the FDA is thirty-five years late in reviewing.
Despite the abundant scientific evidence to the contrary, the FDA’s current position is that triclosan is not currently known to be hazardous to humans. In fact, the agency considers triclosan a “superfluous” chemical, and even says triclosan is no more effective at killing bacteria than soap and water! So why is it allowed?
Frustratingly, the FDA’s proposed rule would require manufacturers to provide more substantial data to demonstrate the safety and effectiveness only of antibacterial soaps and body washes that are used with water. It does not apply to hand sanitizers, hand wipes, or antibacterial soaps that are used in health care settings such as hospitals, nor to products that are ingested like mouthwash.
Meanwhile, many of the “germs” we kill are actually essential to our bodies’ natural, optimal bacteria balance. They act as probiotics for your gut and skin; are naturally anti-inflammatory; and boost the immune system.
Action Alert! The FDA is asking for public comment on the agency’s 2014–2018 priorities. Contact the agency and point out that a review of triclosan is not mentioned anywhere in priorities. Demand that they stick to their stated 2016 deadline, and suggest they issue draft a proposal by 2015 on triclosan to give the public time to review and comment. Please send your message immediately!