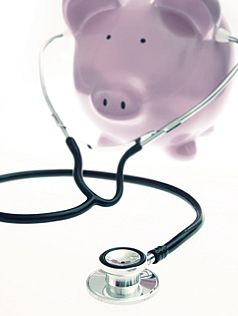 Let’s hope so, since many of us depend on them for natural health expenditures.

But apparently the Department of Health and Human Services (HHS), in response to grassroots activists like you, and to the surprise of legislators who voted for the Act, has found a way to allow them to incorporate high-deductible plans—and thus to save HSAs. Based on the actuarial analysis, some high-deductible plans may qualify as bronze level plans on the insurance exchange. (These are insurance plans where the patient pays 40% of the bill, and the insurance plan picking up 60%.)

This is a very big surprise, and a welcome one. Does it mean that HSAs are in the clear? Not necessarily. Even though our HSAs seem to be allowed, it will be hard to get insurance companies to offer them when 80% of the premium must be paid out for healthcare expenses. So HSAs aren’t out of the woods yet—we’ll have to wait and see how everything works out when the rules are fully implemented, and of course we’ll keep you posted. But for now, we are guardedly optimistic.

Unfortunately, the word about FSAs isn’t as good. As we reported previously, Flexible Spending Arrangements allow employees to be reimbursed for medical expenses. FSAs are usually funded through voluntary salary reduction agreements with one’s employer. No employment or federal income taxes are deducted from the employee’s contribution, and the employer may also contribute. Under the new rules, there is a $2,500 limit on annual contributions to FSAs. This limit will disproportionately affect families who get CAM treatments.

Last week the government also issued its proposed rules for wellness incentive programs. These programs were already established under HIPAA (the Health Insurance Portability and Accountability Act, which mainly deals with patient privacy issues), but they have increased weight under ObamaCare.

There are two types of wellness programs:

Obese patients can be charged a higher healthcare premium with many wellness programs—even though the government’s close ties to industry actually perpetuates the obesity epidemic. For example, the sugar industry, in a strategic marketing campaign, manipulated scientists and government officials to overlook health problems caused by the overconsumption of sugar. In many other instances too, the government is disseminating the wrong nutrition information, and patients who follow it are further penalized by having to pay higher premiums.

A larger concern with workplace wellness incentive programs is that companies may coerce their employees to follow specific guidelines to meet mainstream medicine’s idea of “health”—for example, pressuring employees to take statin drugs to reduce cholesterol, or blood pressure medications that may weaken the heart over the long run, or to undergo invasive tests, some with high radiation. If the employee chooses to opt out of the plan, they may get penalized by having to pay a greater share of their health insurance payment—up to 30% more under PPACA. Such an approach was already proposed in Chicago.

Fortunately, the newly issued rules do provide some possible opt-outs for natural health consumers, although they may be hard to use in practice. Employees may request a reasonable alternative wellness program based on the recommendation of their personal physician (even an integrative physician), a program that is better suited to promoting the individual’s health. Even so, all of this is encouraging employers to delve way too deeply into our personal decisions.

Proposed rules were also issued for essential health benefits (EHB). PPACA mandates that health plans offered in the individual and small group markets offer “essential health benefits” that must be equal in scope to benefits offered by a “typical employer plan”—but this will vary from state to state, and whether or not CAM therapies will be covered depends entirely on the “typical plan” selected by the state. Some states are already choosing their EHB package; states like California and Washington have decided to include acupuncture as one of services covered under the EHBs, though whether other states will follow suit is anyone’s guess.

Other states have not yet begun the process. EHBs are supposed to be decided by the end of 2012, so it is unclear what these states plan to do. If a state does not decide on its EHB package, the federal government will select a default benchmark plan for the state.

Then there’s the issue of health insurance exchanges—competitive health insurance marketplaces that are supposed to offer a choice of health plans, establish common packages and pricing structures, and provide information to help consumers better understand the options available to them. Under PPACA, each state is supposed to set up its own insurance exchange. If they fail to do so, the federal government has the authority to step in and operate an exchange in those states.

PPACA is over 2,000 pages long and was created in a rush, so some big glitches are emerging. It now appears that in states which choose not to set up their own exchanges (and that may be as many as half), the federal government is legally barred from providing subsidies. This may have been intended to encourage the states to set up exchanges, but if so, that idea has backfired, especially in light of the Supreme Court decision allowing states to opt out.

One good piece of news is that, according to our source at HHS, even if states decide not to set up an exchange, they do not forfeit their rights to choose their own EHB package—and that is very good news indeed for integrative medicine patients. You can follow states’ progress in choosing EHBs here.

Meanwhile, the big open question about PPACA remains its effect on employment. The benefits required for a minimum wage employee with a family are almost as large as the minimum wage itself. This has already led to firms replacing employees with machines—for example, replacing employees with electronic teller machines in drug stores. In addition, the penalty for employers not offering healthcare is computed based on full-time workers (another drafting glitch), so many firms are considering moving to more part-time employees. The Congressional Budget Office also estimates that PPACA covers two million fewer Americans than originally predicted.

2 responses to “Will New Federal Rules Save Health Savings Accounts?”