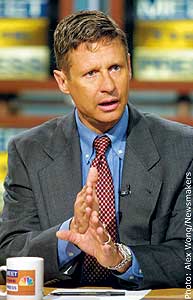 Leading up to the 2012 election, ANH-USA will reach out to all candidates running for president and ask them real questions about natural health and where they stand on issues that are important to ANH-USA members. Our first interviewee asks, “Where is the profit in healthy people?”—a question that goes to the heart of many of our current health problems.


Gary Johnson, the former two-term governor of New Mexico, founded one of the largest construction companies in the southwest. During his time as governor, he pushed an anti-tax and anti-bureaucracy platform and vetoed more bills than the other 49 governors combined. He’s known as a fitness expert who has climbed Mount Everest and takes part in Ironman Triathlons. Gary Johnson announced his candidacy for president last month.

ANH-USA and its members believe that we don’t have a healthcare system in the US; we have a pharmaceutical-profit-driven “sick-care” system. How would you help change the paradigm and get the country on a real path to health and wellness?

I often point out that our current healthcare system is the least “free” of practically any component of our supposed free market system. Every step of the process, from what we eat and drink to the pharmaceuticals we are prescribed to the treatment options we face, is regulated in some fashion by bureaucracies—both government and corporate. In contrast, I am a firm believer that most people, if free to do so, will ultimately make the best decisions about their own well-being. Thus, my approach is to remove obstacles to free choice in a free market, thereby allowing the consumer to demand products and treatments that promote wellness, health and real preventative care. The system we have does just the opposite.

Why are so many natural and integrative health options not covered under insurance plans, even though they’re frequently less costly and more successful? What would you do to change that?

When government regulates, the inevitable result is policy that creates winners and losers. And whenever government creates winners and losers, those with the most clout and the loudest voices tend to prevail. In any industry as highly regulated as healthcare and insurance, that unfortunate tendency always filters down into the corporate cultures as well. I believe the institutional biases against natural health options are the direct result of a system that has picked winners and losers. Changing that requires a leveling of the playing field in which, again, consumers are picking the winners—not institutions.

Despite the rallies, bus tours and protests that occurred, let’s be honest. The process that resulted in the healthcare “reform” law was much less of a debate than it was a negotiation among massive vested interests. Those of us on the outside of that negotiation didn’t even have an opportunity to know what was in the so-called reform, and there was no room at the table for advocates of truly innovative or game-changing ideas. After all, where is the profit in healthy people?

At the end of the day, however, politicians’ self-preservation depends not on institutions, but on people who vote and make themselves heard. ANH-USA is on the right track toward mobilizing the millions of Americans who support natural health and wellness, and once the “system” is awakened to the fact that those millions of Americans are watching and voting, I suspect there will, indeed, be a seat at the table.

We asked our Facebook fans if they had a chance to ask a presidential hopeful a question, what would they ask. This question was the most popular: “Would you be willing to feed you and your family ONLY genetically modified food from now until you are out of office? If not, why should we be expected to eat it?”

I would absolutely not be willing to feed myself and my loved ones only genetically modified food, and I am equally opposed to expecting anyone else to do so. As an advocate of personal choice, I would also defend the right to choose to eat whatever kinds of food one wants—without those choices being limited by the government or the distorted, constrained marketplace it has created.

If our readers want to find out more about you, where can they go?

Our campaign is entirely about giving voice to the ideas of limited government intrusion in our lives, protecting individual freedom, and revolutionizing America with a large dose of common sense. ANH-USA members and supporters are an important part of that effort, and I encourage all to climb on board. Visit our website: www.garyjohnson2012.com.