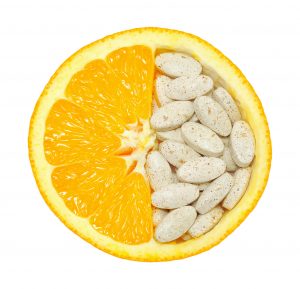 Dr. Offit says yes. Our experts say no. Here’s why.

Last month we told you about Dr. Paul A. Offit, who wrote a New York Times opinion piece and related book about the dangers of vitamin supplements. In the article, Dr. Offit writes, “When people take large doses of antioxidants in the form of supplemental vitamins, the balance between free radical production and destruction might tip too much in one direction, causing an unnatural state where the immune system is less able to kill harmful invaders.”

Two years ago we discussed a similar article on antioxidants published in Newsweek. You may recall that Dr. Jonathan Wright noted that Newsweek’s view of antioxidants vs. oxidants was too simplistic: “When a molecule loses electrons, it has been ‘oxidized’; when it gains electrons, it has been ‘reduced.’ Since one molecule’s loss is always another molecule’s gain, the oxidation/reduction must always occur simultaneously, and the whole electron-exchange transaction is called a ‘redox reaction.’ ” He showed that it’s not a straight reaction between “antioxidants” and “oxidizing agents.” Instead, antioxidants work on both sides of redox reaction—sometimes donating electrons, and sometimes gaining them. Antioxidants are more accurately described as “redox reaction regulators,” assisting on both sides of the electron subtraction (“oxidation”) and addition (“reduction”) equation.

Dr. Wright also pointed out that vitamins should always be taken with other substances. For example, taking beta-carotene in large quantities without the cofactors found in nature, such as other carotenoids, or taking vitamin E in the common alpha-tocopherol form without other tocopherols, especially gamma, is dangerous. Antioxidants occur in groups in nature, and this should always be considered when supplementing.

ANH-USA board member Dr. Jeanne Drisko provides further context: “Offit’s argument would only be correct for extreme cases of antioxidant overconsumption. White blood cells make an oxidative burst by creating hydrogen peroxide (H2O2), and to do this utilize some of what are commonly referred to as our antioxidant vitamins—most notably vitamin C. When vitamin C is oxidized and reacts with a dietary metal like iron, it makes the H2O2 burst that kills bacteria and viruses. After that, we then need to quench or break down that oxidative burst—and once again, antioxidants do the job. At the very least, a multivitamin/mineral complex is necessary to support these important biological reactions.”

Dr. Drisko points out that supplementing with very high doses of antioxidants needs to be approached with some caution. “We need the oxidative burst to make energy, but too much and the mitochondria and the cell as a whole can be damaged irreparably, which can cut down on energy production. So life is a balance. We need good levels, but not too much. Dr. Offit proposes taking no vitamins and mineral supplements, while others propose mega-dosing with no evaluation! Both positions are extreme—and harmful. We need healthcare providers such as trained integrative medical doctors or naturopathic doctors to measure the blood levels of these critical nutrients, and adjust dosages accordingly.”

In addition to the question of whether moderate antioxidant use will reduce or increase the risk of cancer, another related question is whether they should be taken during cancer treatment with poisons such as conventional chemo that are intended to kill cancer cells but which kill normal cells as well.

Conventional oncologists using chemo are usually dead set against any antioxidant supplementation, even if taken well before or after the chemo. In taking this position, they seem to be ignoring important evidence that antioxidants can help protect healthy cells and lead to a better outcome.


As Dr. Moss points out, “If a single antioxidant, such as N-acetylcysteine or vitamin E, could diminish survival…then what would be the expected impact of a panoply of vitamins and antioxidants [such as those used in these studies]? It would be catastrophic, especially in stage IV disease! Instead, in these studies, we find exactly the opposite. Patients in every stage of the disease did better, sometimes much better, but never worse.”

These particular studies involved diet as well as supplementation. Conventional medicine also willfully ignores the growing evidence that it is possible to use diet to retard cancer growth. All too often doctors tell cancer patients it doesn’t matter what they eat, when good evidence suggests they should, at a minimum, avoid sugar and starchy food.

Dr. Offit is not just against antioxidants. He seems to be against supplements in general. In a radio interview, he hammered away that supplements are not regulated the way drugs are—and seemed to say they should go through the same FDA pre-approval process as drugs. The radio host responded, “Why not? What argument can there be against that?”

The host apparently had no idea that drug-like pre-approval would simply mean the elimination of supplements. As we have often pointed out, nobody can afford to spend an average $1 billion getting FDA approval for a natural substance which, being natural, cannot be patented. This is the “Catch-22” of modern medicine. Why doesn’t Dr. Offit offer a solution to that problem?

He should also realize and admit that supplements are far, far safer than drugs. FDA-approved drugs are responsible for 409 times more serious Adverse Event Reports than for nutritional supplements, as we demonstrated in 2011. But let’s compare apples to apples, and look at the dangers of supplements versus OTC drugs like acetaminophen, which every year is responsible for 100,000 calls to poison control centers, 56,000 emergency room visits, 26,000 hospitalizations, and more than 450 deaths from liver failure. By contrast, our analysis of the 2010 Poison Control data shows that FDA-approved drugs caused 80% of Poison Control fatalities, but only a single death concurrent with supplement use—vaguely and probably irrelevantly concurrent with an “unknown dietary supplement or homeopathic agent”—with no deaths reported before 2009. Supplements’ excellent record of safety is the very reason they don’t need extra regulation or some pre-approval system.

Supplements’ excellent record of safety are another reason they don’t need a drug-like pre-approval system. A third and also important reason is that supplements are concentrated food, not drugs, and in many cases should not either be taken or tested alone. As we mentioned above, vitamin E as alpha-tocopherol should not be taken or tested alone and many supplements are like this. Calcium, in particular, should not be taken without cofactors such as vitamin K2.

Dr. Offit also recently published in the UK Guardian as well. As Dr. Robert Verkerk, executive and scientific director of ANH-Int’l, discusses in his review of the Guardian piece, Offit’s attack on antioxidants is totally without substantiation: “Nowhere does Dr. Offit find space to mention a single piece of scientific evidence in favor of a single vitamin or antioxidant. When one considers how extensive this literature is in the case of resveratrol and curcumin for joint health, to take just two examples and one indication, the bias in Dr. Offit’s article becomes crystal clear. And yet, based on his incredibly selective reading of the literature, he confidently proclaims: ‘The data is clear [sic]: high doses of vitamins and supplements increase the risk of heart disease and cancer.’”
As revealed by CNN, Dr. Offit is a multimillionaire from inventing vaccines—and based on his statements seems to have no concerns about loading more and more vaccines on infants and children. Having made so much money from one of the most controversial areas of conventional medicine, he cannot exactly claim to be a disinterested observer of natural medicine.

76 responses to “Are Antioxidant Supplements Such as Vitamin C Harmful?”