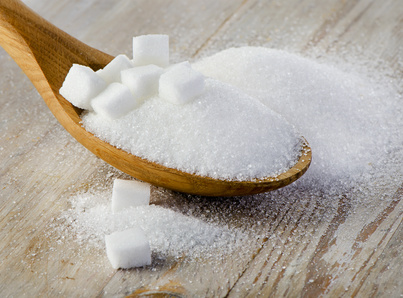 Including everything you need to know to protect your health in the crossfire. Action Alert!
For years, the Corn Refiner’s Association (CRA), which represents companies that process and sell high-fructose corn syrup, or HFCS, and the Sugar Association have been in a cutthroat competition.
In 2010, CRA asked the FDA permission to rebrand HFCS as “corn sugar” in an attempt to rehabilitate HFCS’s negative image—that is, to trick consumers into thinking HFCS is nutritionally equivalent to processed sugar or even natural sugars. In 2011, the Sugar Association sued CRA for its “misleading campaign.” In 2012, CRA sued right back for “smearing” HFCS.
It’s difficult to decide whose “spin” is more absurd. For example, a Sugar Association webpage entitled “A Balanced Diet” includes a picture of an “ideal” grocery bag filled with fruits, vegetables—and Fig Newtons. This page also that argues that sugar is an “essential” part of a healthful diet:
The simple, irrefutable fact is this: Sugar is a healthy part of a diet. Carbohydrates, including sugar, are the preferred sources of the body’s fuel for brain power, muscle energy and every natural process that goes on in every functioning cell. Sugar is more than a “fun” food ingredient, it’s an essential one as well. Because it’s all-natural, you can consume it with confidence.
Meanwhile, and as court documents reveal, CRA didn’t even believe its own “sweet surprise” media campaign. For example, one HFCS spokesman said in an email with the subject line “Marketing Ploy,” “I think it provides a point to ridicule the [sweet surprise] ads and the industry comes off as being disingenuous.” The same spokesman later referred to calling HFCS corn sugar “dishonest and sneaky.”
A favorite tactic of Big Business has always been to create industry-funded front groups with innocent sounding names (a classic is “Americans for Medical Progress,” a Pfizer-funded “nonprofit” that targets animal rights groups). These sham nonprofits produce “reports” that parrot whatever message industry wants to deliver, which are then echoed over and over again by the mainstream media.
As revealed in the HFCS/sugar court documents, the Center for Consumer Freedom—the Big Food-backed nonprofit we told you about in December—got caught threatening to bury unsavory data concerning HFCS.
Richard Berman is executive director of the Center for Consumer Freedom. According to the New York Times, Mr. Berman was hired to rebut a University of Southern California study that found soda had higher concentrations of high-fructose corn syrup than advertised. So Berman tasked the Center for Consumer Freedom with challenging the results with a study of its own, or—if the Center’s study confirmed the University study—burying the results: “If the results contradict U.S.C., we can publish them,” said an email sent to Mr. Berman and other staff in October 2010 from a Berman employee at the time, referring to the University of Southern California report.…“If for any reason the results confirm U.S.C., we can just bury the data.”
And, in an alarming new twist, the “Sugar War” court documents also revealed that another nonprofit organization—this time one not created by industry!—accepted Sugar Association dollars to publically oppose CRA. It seems Big Food has found an innovative new way to twist the truth at the public’s expense.
The endgame of both associations’ lawsuits is to win the hearts (and grocery dollars) of consumers by smearing the competition. However, by suing each other, they’ve revealed the lengths industry will go to manipulate public opinion.
In the midst of their PR campaigns, “rebranding” schemes, and legal mudslinging, CRA and the Sugar Association are forgetting one key fact: consumers aren’t forced to pick either HFCS or sugar—they can say “no” to both. Science shows that’s exactly what the public should be doing.
Alzheimer’s Disease: Is It Actually “Type 3 Diabetes”?
By now, most people know that sugar causes Type 2 diabetes, and that Type 2 diabetics have a higher risk of developing Alzheimer’s. However, study after study is demonstrating that Alzheimer’s may actually be another form of diabetes.
One prominent study concluded that sugar consumption “correlated significantly” with diabetes, “independently of other socioeconomic, dietary and obesity prevalence changes.” In plain English, they found that the more sugar you consume and the longer you consume it, the higher your diabetes risk; and as sugar consumption drops, diabetes rates drop as well.
Insulin helps cells take in the sugar they need to make energy. Diet-induced diabetes develops when your body “ignores” insulin (this is called insulin resistance), your cells stop taking in the necessary sugar for energy production, and you have too much glucose in your blood stream. This excess glucose can go on to damage your nerves and blood vessels.
This damage certainly extends to your brain: high blood sugar can cause inflammation that injures brain cells. Also, when your brain cells become insulin-resistant, the brain “starves”: you lose memory, become disoriented, and, according to the New York Times, “might even lose aspects of your personality.” Additionally, a lack of insulin in the brain may be linked to the form of protein-plaque associated with Alzheimer’s. In short, many scientists now believe that Alzheimer’s may be directly caused by sugar consumption.
If you and your loved ones want to reduce your risk of Alzheimer’s, it seems eliminating (or at least seriously limiting) sugar in your family’s diet may be a good place to start.
Other Dangers of Sugar
The deeper science dives into the sugar bowl, the more danger it finds:

But HFCS Is Even Worse

What About Artificial Sweeteners?

Fructose Is Not a Good Substitute
Fruits can have quite a bit of sugar, mostly in the form of fructose. However, this sugar is “delivered” via a whole food with lots of fiber—fiber not only helps you feel full, but slows your liver’s absorption of fructose (this is why fresh fruits are so much better for you than fruit juice).
Even so, you can have too much of a good thing: excess fructose from sugar can overload and damage your liver. For this reason, Dr. Mercola recommends you limit your fructose from fruit to 15 grams or less a day (that’s about an apple and a half, or about two bananas).
“Good” Sugars?
As we told you in 2011, some safer alternatives include stevia, sugar alcohols like xylitol and erythritol, and inulin. Stevia, a South American herb, is estimated to be some 150 to 400 times sweeter than sugar. Xylitol was originally isolated from birch sap, and is a must for dental hygiene (it can be used as mouth rinse since it prevents cavities very effectively; it is especially good for children, particularly those who have not had their teeth treated with a tooth sealant that contains BPA). Xylitol is also for use with colds and sinus infections, but it may not be the best choice for a sweetener as some people find it has a laxative effect in larger quantities. Erythritol occurs naturally in fruits and fermented food. Inulin, which is isolated from Jerusalem artichoke, is available as a powder or as Jerusalem artichoke syrup. Inulin is a long-chain polysaccharide that is mostly too long a sugar to absorb into the blood stream, though too much inulin intake can cause digestive distress in some people.
Don’t forget natural, though not low-calorie, sweeteners. Honey (raw, organic, and wild) is always the natural sweetener of choice. Maple syrup is the only sustainably-harvested, large-scale, forest sweetener in the world. Unsulfured, organic sugarcane molasses is fairly rich in vitamins and minerals and has been purported (like fresh sugar cane) to have “anti-stiffness factors” that break down detrimental calcification. And Lo Han Guo is a non-glycemic sweetener made from a type of wild cucumber used in Traditional Chinese Medicine to treat cough and laryngitis.
America’s Sugar Addiction Is Costing You
Sugar and HFCS won’t just damage your health—your tax dollars are at stake, t­oo.
Sugar is linked to $1 trillion in healthcare spending, and between 1995 and 2012, the US government spent $84.4 billion dollars on corn—aka HFCS—subsidies (in 2009, 11.7 million metric tons of corn was turned into HFCS).

Meanwhile, the USDA’s sugar program—which consists of government loans, prohibitive tariffs, and artificial price supports—costs consumers over $3 billion a year. In 2013, just the loan portion of the program cost taxpayers $258 million in defaults, and forced the USDA to buy 640,000 tons of excess sugar.
That’s right—even if you’re not consuming sugar, you’re still paying for it.
This year is likely to be just as expensive. Although droughts in Brazil (the world’s biggest exporter of sugar) may spark a sugar shortage and raise global prices, America will still have a glut of sugar. This is because, since the American market pays a few cents more per pound than the international market, foreign farmers will still get the best price by selling to the U.S. This anticipated flood of imports—clearly unchecked by tariffs—could further saturate the American sugar market, driving down prices and encouraging farmers to default or hand their product over to the USDA.
Consider this: the government subsidizes sugar and HFCS (via corn subsidies). Big Food adds these harmful ingredients to their foods, sparking an epidemic of diabetes, then sells products for diabetics. The government—again using your tax dollars—cleans up Big Food’s healthcare mess. In essence, the US government is using your tax dollars to help make Americans sick so that Big Business can profit. A sweet tale of crony capitalism at its finest.
Take the case of the huge multi-national company Nestlé. It is best known for chocolate, but its products also include baby food, bottled water, breakfast cereals, coffee, dairy products, pet foods, and snacks. Among Nestlé’s blockbuster brands are Butterfinger and Kit Kat candy bars, sugary Nesquik “milk,” HotPockets, and a plethora of ice cream products.
Nestlé has around 450 factories, operates in 86 countries, and employs around 328,000 people. So while Nestlé doesn’t have a monopoly on disease-causing processed foods, they certainly have a large share of the market.
Interestingly, Nestlé not only makes the foods that can lead to diabetes—they sell products created to manage it, including Boost Glucose Control and Diabeteshield drinks, Dietsource salad dressings and pancake syrup, Glytrol (“complete nutrition support for patients with hyperglycemia”), Nutrisource frozen egg products, and Resource sugar-free puddings and desserts, mainly for hospitals. So there is no secret here—Nestlé makes no attempt to hide the fact that Big Food first sickens Americans, and then profits from it.
Action Alert! The government subsidizes the sugar industry to the tune of over $3 billion tax dollars per year. It’s time to stop paying for a product that directly contributes to our most grievous health problems. Tell Congress to repeal the sugar program!