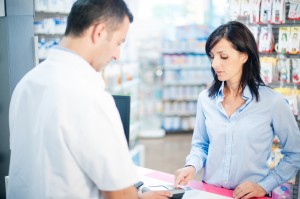 Companies claim that the blanket denial of coverage of compounding ingredients is against federal law. It could also affect access to critical natural health products. Action Alert!
In August we told you about pharmacy benefit managers (PBMs)—companies that process prescriptions for insurance companies and corporations, and use their size to negotiate low prices with drug makers and pharmacies. They act as intermediaries between the payor and everyone else in the healthcare system.
Now three compounding pharmacies—Annie’s Apothecary, Cypress Compounding Pharmacy, and Wiley’s Pharmacy and Compounding Services, Inc.—have filed suit against the country’s largest PBM, Express Scripts, for its decision to drop coverage of ingredients used by compounding pharmacies.
Express Scripts adopted a policy to block coverage of approximately 1,000 ingredients for compounding. Other PBMs—notably, Optum RX, CVS Caremark, and Catamaran—have also placed restrictions on compounding ingredients. The outcome of this case could dramatically affect coverage policies adopted by other PBMs.
According to internal documents, Express Scripts’ goal was clear: to cut spending on compound pharmaceuticals by 95%. The compounded medicines being prescribed were just as safe and effective as they had always been, and Express Scripts could point to no study or research that said otherwise; in fact, they didn’t even raise the issue. The company also didn’t discuss the harmful effect that not providing access to these medications would have on patients.
According to the lawsuit, Express Scripts dropped coverage in direct violation of the federal rules that govern the handling of health plan claims. The law requires that the claims handler disclose the specific reasons for a claim decision, including specific reference to the health plan provision(s) upon which a “not covered” claim is allegedly based. The law was structured this way to help patients determine whether denials can be properly challenged.
However, Express Scripts is covering up its financially motivated decision by issuing intentionally deceptive and misleading letters to patients, informing them there has been an unspecified change in the compound medications—and speciously stating that there is a lack of FDA approval for compound medications. Letters to patients have further suggested that there are safety concerns over compound medications—even though good manufacturing practices standards have been fully and consistently met—and Express Scripts has been providing coverage for years.
As we have noted previously, Express Scripts has no right or ability to determine what is medically necessary. This is a matter that is supposed to be strictly between doctor and patient.
ANH-USA is working with a coalition of doctors and pharmacies to address the very problematic implementation of the compounding law, including:

Compounded medications are a vital part of natural health. They include such critical products as thyroid medication and estriol, the bioidentical form of estrogen.
Action Alert! If you have not done so already, please add to the pressure on Express Scripts and other PBMs by reminding them they have no authority to countermand a doctor’s healthcare directive with their own assessment of what is “medically necessary.” Show them how important compounding is to families like yours. As important as the lawsuit is, consumer pressure is also needed. Send your message today!