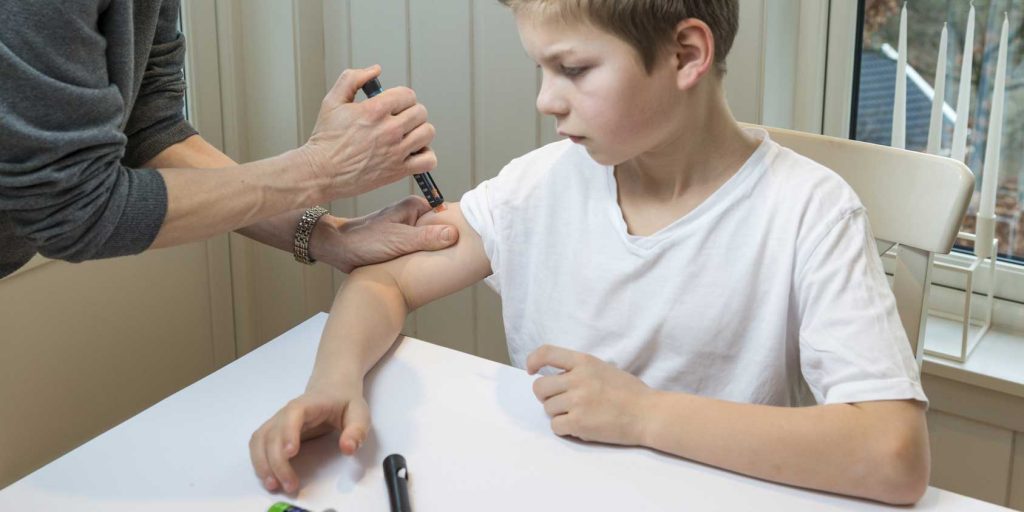 Research (reported, and in these United States, ignored, even though it was reported in 2001 in The Lancet, one of the most prestigious medical journals) tells us of a safe and very inexpensive way to completely prevent a major proportion of type 1 diabetes.
This particular research report concerned a thirty-one year follow-up study of over 10,000 children born in 1966 in northern Finland. The mothers were advised to give their newborns 2,000 IU—yes, that’s 2,000 IU—of vitamin D per day for their first year of life. The researchers followed up with the families to determine which children had been given the vitamin D, which had not, and if any of them had signs of rickets (caused by severe vitamin D deficiency).
Thirty-one years later, the now-adult children who were regularly given the supplement during their first year had a nearly 80% lower incidence of type 1 diabetes. In sharp contrast, those children who showed signs of rickets (bone disease caused by a severe lack of vitamin D) at age 1 had 300% more type 1 diabetes diagnosed over the following thirty-one years.[1]
And There’s More: Fish Oil
Cod liver oil (which contains both omega-3 fatty acids and vitamin D) also cuts the risk of type 1 diabetes. The Journal of the American Medical Association—another major medical journal—reported a study of 1,770 children at increased genetic risk for type 1 diabetes. Each had a brother, sister, or parent with type 1 diabetes, and/or HLA (genetic) testing that showed them to be at extra risk. Each of them underwent special testing for something called “islet cell auto-immunity,” which essentially “proves” type 1 diabetes.
Fifty-eight children developed type 1 diabetes, as proven by antibodies to pancreatic islet cells. The children with the highest levels of omega-3 fatty acids in their red blood cell membranes had the lowest risk of type 1 diabetes! The researchers concluded, “Dietary intake of omega-3 fatty acids is associated with reduced risk of [type 1 diabetes] in children at increased genetic risk for type 1 diabetes.”[2]
And for bonus points, prenatal omega-3 fatty acids (found in abundance in cod liver oil) helps improve mental development in infancy.[3]
My beginning recommendations for pregnant moms are one tablespoon of cod liver oil daily (along with 400 IU of the mixed tocopherol form of vitamin E) along with enough extra vitamin D—how much of which depends on the result of a vitamin D blood test (for the technically inclined, a “25-OH vitamin D” test), usually between 4,000 and 6,000 IU daily. In thirty to sixty days, vitamin D levels are measured again, and dosages are adjusted accordingly to maintain a blood level of 60 to 100 nanograms per milliliter—the levels found in non-supplemented men and women living in tropical areas of the world. Those women’s babies are not harmed by their moms’ vitamin D blood levels; in fact, they benefit, as the lowest levels of autoimmune disease worldwide are found in tropical areas. Researchers attribute that to higher vitamin D levels. However, everyone’s different, so please check with your own physician skilled and knowledgeable in natural medicine for recommendations for you.
After the baby is born, unless you personally live in the tropics where you and your infant can get plenty of sunshine daily, it appears that giving your newborn vitamin D every day can significantly cut his or her risk of type 1 diabetes for at least the next thirty-one years.
As the Lancet-reported study was done in Finland, far north of the tropics, and you may live in Arizona or Florida and expose your infant regularly to sunshine, keep in mind there are much better ways to prevent skin cancer than using sunscreen (see Green Medicine Newsletter, May 2016). A dosage of 2,000 IU vitamin D daily may or may not be necessary for your child to very significantly lower risk your child’s risk of type 1 diabetes.
Again, please check with a doctor skilled and knowledgeable in natural medicine for vitamin D recommendations for your child, and you can significantly reduce his or her risk of type 1 diabetes. Vitamin D was effective then (1966–1997), and will be effective now and in the future!